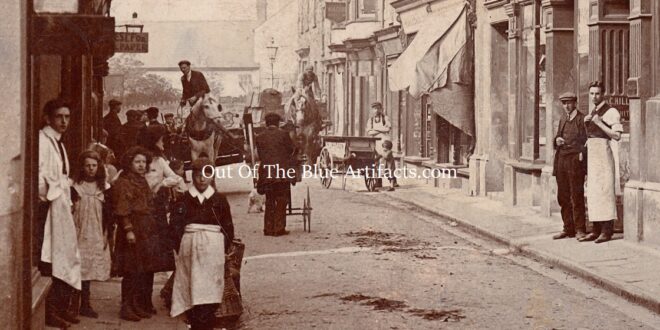 Market Street – Abertillery in 1908.
The photograph in the (main featured image above) was taken in June 1908. It can be dated to that precise time as the billboards outside the Market Hall are advertising Senor Jose Gomez the celebrated Spanish violinist who was booked to perform there in June 1908.

Market Street was one of the main streets in the shopping area of Abertillery. Long before the Foundry Bridge was constructed the town centred around Cwm Street, Commercial Street, High Street and Somerset Street. After the construction of the bridge it opened up the top half of Church Street to shop premises and trading though Market Street area remained the hub of the town.

Following is a brief list of the traders and trades that were present at Market Street the time the photograph was taken.

The Market Hall.
Originally built in the 1870’s and later rebuilt in 1892. Known as the Market Hall until September 1900 when it was renamed the Abertillery Metropole. The Market Hall consisted of the hall, lock-up shops and offices. At the time of this photograph the manager was Mr C. J. Seaborn. 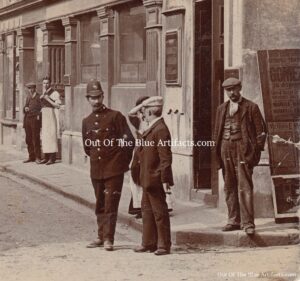 Mr G. C. Hillard, Architect.
Mr George Cox Hillard Architect was located in the Market Chambers, Market Street, Abertillery. Mr George Cox Hillard and his wife Rosina Emily Hillard nee Price of Aberbeeg were living at Warm Turn, Aberbeeg. The G. C. Hillard name plate (can be seen on the plaque in the doorway of the hall behind the two gentlemen on the right). Mr G. C. Hillard was the architect in charge of the construction of the new Bon Marche Store in 1901.

Following is a Link to – The Market Hall Story.

Wall Paper Shop.
The sign post far left is illegible and no known wallpaper traders were on the street at this time.

Mrs E. M. Jones Wine & Spirit Merchant.
Mrs Elizabeth Morgan Jones was resident at 8 Market Street, an Off-License and a Wine and Spirit Merchant. Also an agent for the Anglo Bavarian and Rogers A.K. Ales, Oakhill, Whitbread, Inde Coope, Burton Ales and (as seen on the sign outside her shop) W.&.A. Gilby’s Wines.

Messrs Bracchi & Co, Cafe.
Messrs Bracchi were originally at the Arcade though moved to Market Street and appointed Mr Amarilli Jackson as manager. Mr Jackson’s ice-cream cart can be seen outside the premises. 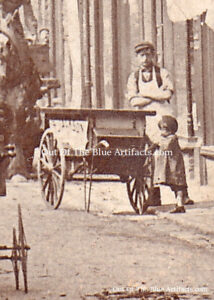 I believe he also at one time had a confectionery shop at Carlyle Street and Station Road junction on Tilney’s ground, later demolished for the construction of the Empress Skating Rink. Later Mr A. Jackson had his own Refreshment Rooms at Market Street, Mr Eneo Gallani was the waiter working at the cafe. In 1914 the Cwmtillery Cycling Club used the Jackson’s Refreshment Rooms as their headquarters.

An Organ Grinder & Monkey.
In the centre of the image is what seems to be an organ grinder? A street organist and his monkey. Most, if not all organ grinders were Italians, or from Italian descent. In the 1890’s the organ grinders in the larger cities were earning good money, on average 10s. to 15s. per day during the summer and on Bank Holidays up to £3. per day. In winter they could earn 6s. to 10s. per day and on Saturdays between 10s. and 16s. I have no information on this particular organ grinder or street organist although there are many featured on the 1911 census in other towns in South Wales.

Mr F. Thorne & Son, Butchers.
Mr and Mrs Frank and Gwenlian Thorne owned a Butchers Shop at 15 Market Street, they later had a Butchers Shop at 5 Alexander Road Six Bells. (Messrs Thorne, Butchers Shop were not listed in the 1907 Copes Directory or the 1911 census, though were on the 1901 census and in the 1914 Kelly’s Directory. In 1903 Mr Frank Thorne invited tenders from builders to construct a house on Blaina Road, Abertillery. At the time of Mrs and Mr Thorne’s deaths in 1925 and 1929 respectively they both lived at the Oaklands, Blaina.

Mr W. M. Pryce, Watchmakers and Jewellers.
Mr W. M. Pryce had a Jewellers and Watchmakers Shop at 16 Market Street, Abertillery. The premises were later taken by Mr Thomas Prosser and Son and used as a Fish & Chip Shop.

Mr Nathan Joseph, Furniture Dealers.
Mr Nathan Joseph had a Furniture Shop and dealership at 18 Market Street. Mr Nathan Joseph was the brother-in-law to Mr Joseph Falkman and they later became partners trading as Joseph & Falkman. They later had shops in various places at Abertillery and Llanhilleth.

The House and Estate Agents.
There was a House & Estate Agents premises at 19 & 20 Market Street, Abertillery. The offices were advertised in the South Wales Gazette throughout 1908.

Mr Henry Rees & Sons, Butchers.
Mr Rees had a Butchers Shop in Market Street, more than probably in the Market Hall. Later there were butchers known as Phillips & Rees also operating from the same place.

Coed Iorwg.
In the distance can be seen the houses behind the Co-op, the large area in front was the garden of Coed Iorwg. Mr Edmund James Williams J.P., whose family owned the Lymes House, Abertillery was living at Coed Iorwg House. The house was the setting for many sports teams and other organisations team photographs and such. Also registered at the address in the early 1900’s were Mr Charles Morgan, Mr James Morris and Miss Ethel Cartwright as servants.

There were many traders before and many appeared after though the above list was compiled from the 1908 Gazette Newspaper and other local newspapers and Copes Directory of 1907.