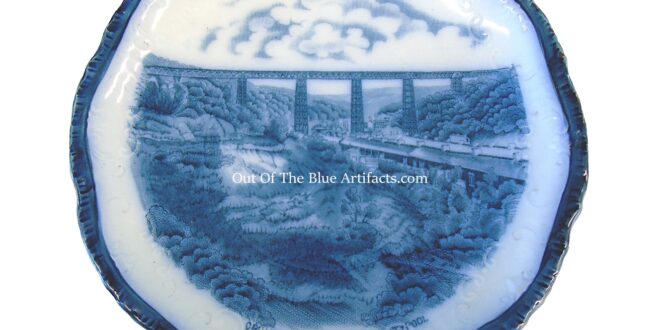 Messrs Briggs & Co Boot and Shoe Manufacturers.
Messrs Briggs & Co were Mr William Edwin Briggs and his son Mr Arthur Edwin Briggs, a family of boot and shoe manufacturers from Leicester. They had stores in all major towns throughout Britain with many in South Wales including Brynmawr, Abertillery, Risca, Blackwood, Abercarn, Ebbw Vale and Newbridge.

The Commemorative Plate.
In about 1907 the Briggs & Company Booters had commemorative plates produced to give away free to customers in all their shops nation wide. In Wales they were produced in a set of at least four, with different images. There were plates printed with Cardiff Castle, Tredegar Clock, the Dual Bridge at Pontypridd and the Crumlin Viaduct (as seen), each plate was a blue & white print with a gold trim, size 9″ inches in diameter and issued free with goods purchased at their stores.

The plates had an ink-stamp of the name of the store impressed onto the back (as seen in the image left).