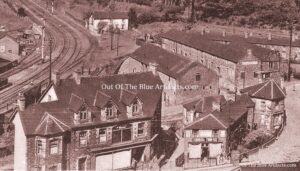 In 1893 the family moved from Abertillery to live at 4 Commercial Square, Aberbeeg and opened a general grocery store. The store had an entrance at the rear of the premises (as seen in the main featured image above) at the end of the pack-horse bridge. While at Abertillery Master Herbert Twissell was a barbers assistant, he stayed in that trade and later carried it on at his fathers grocery store at Aberbeeg and the store became known as Messrs Twissell Hairdressers & General Dealer.