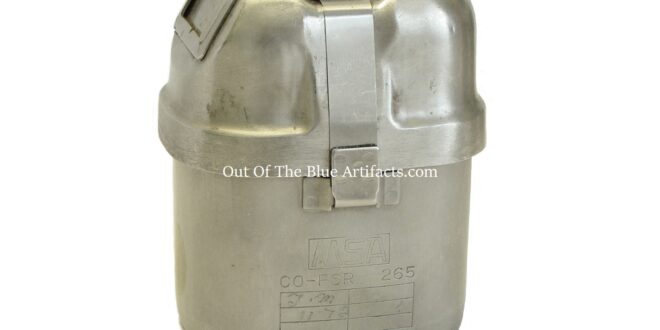 Miners Self Rescuer – Small.
This self rescuer MSA W265 is of a slightly different design with a more angular top casing used in Germany and other European countries.made by MSAs partner, Auer in Berlin. Never used generally in the UK.

These rescuers were only effective against smoke and carbon monoxide in cases of fires underground. They would NOT protect you against mine gases such as methane etc.

The self rescuers came in 2 sizes, the smaller of the two was the first issue, (late 1960’s to the late 1970’s) it would give you approximately 1 hour protection against smoke fumes long enough to get to fresh air. The taller one was a later issue (mid 1970’s to the end of the 1980’s) produced larger to give you more time to exit the mine. The rescuer was inside the sealed tin container and consisted of a charcoal/carbon filled filtered rubber apparatus with a rubber mouth piece, nose clip and head harness.

The W265 was introduced in 1969 after recommendations from many official enquiries and reports. The first to be adopted fully in the UK other than just trial use was the W265 (1 hour) superseded later by the W275 , then the W290 (90 minute, but some changes after the Cardowan explosion), W95 (up to 4 hours and uses noble metals rather than hopcalite) and then right back to a tall model designated W65.

This model (which was used as a training rescuer as indicated by the yellow spot on the side casing) was used in Germany and a couple of other European countries, all these actually made by MSAs partner, Auer in Berlin. Never used generally in the UK.