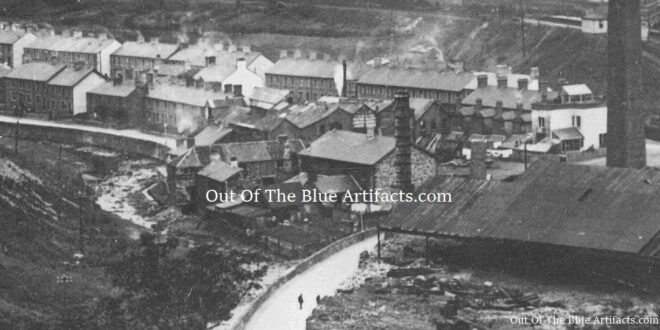 Abertillery Steam Saw Mills and Mr Arthur Tilney.
Mr Arthur Tilney was born in November 1843 at Kirby Bedon, Norwich, Norfolk. Son of Mr Robert Tilney of Norwich, a young Arthur attended the local school and was educated by the Rev Dr Purnell. At the age of 17 years he left Norwich on medical advice and he came to settle in the South Wales Valley’s, believing the mountain air would help his frail health this area was ideal for him.

Upon arrival in the valley he worked as a clerk for the Monmouthshire Railway Company, later he was the station master though resigned when the Great Western Railway Co took over the old company. (Mr Tilney’s exact location in the valley is a bit unclear at the moment, there was a Mr A. Tilney working as a Station Master in Crumlin in the mid 1860’s, also a Mr R. Tilney working in the Junction Box at Crumlin at the same time).

In the 1870’s Mr Arthur Tilney was employed by Captain Phillips the tin plate works owner as an accountant at the Tin Works, Abertillery.

In the early 1880’s Mr Tilney was the proprietor of a shop in Market Street, Abertillery, was on the Abertillery Board of Trade and was the local shipping agent. At this time he made arrangements to purchase the Abertillery timber business from Mr Alexander James Esq, the timber merchant. Mr James was the son of Mr Edmund James of Clyn Mawr Ganol, a family of land owners at Blaenau Gwent. Clyn Mawr Ganol (middle farm) in Welsh, later Grosvenor Home and Penybont Nursing Home, a private Nursing Home on Portland Street, Blaenau Gwent. 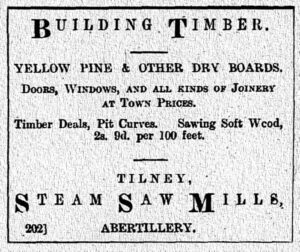 The Timber Mills.
In about 1881 Mr Tilney set up his newly acquired timber business opposite the tin works on Station Approach, close to the Railway Inn (as seen in the featured image above) these works grew into one of, if not the biggest timber businesses in South Wales. Mr Tilney named his business the Western Valley’s Steam Saw Mills.

He not only made his money from timber but as the ads (below) show he also dealt with and traded in other goods. He didn’t seem content with just running his own business and branched out in other projects and schemes. In conjunction with Rev O. S. Richards he set up the Western Valley Weekly News – the forerunner to the South Wales Gazette. 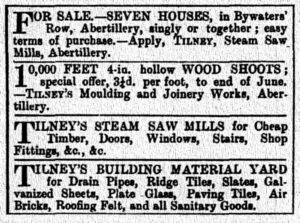 The Cwmtillery Brick Works.
In 1892 Mr Tilney purchased the old Wallace’s Brickworks in Cwmtillery (Woodland Brick Works) he advertised for tenders from builders for the construction of new kilns and started to produce his own red bricks, examples of these can be seen in the Abertillery Museum.

Mr Tilney’s Business Enterprise.
He also had a wheelwrights and built carts and caravans etc. He had his own land in the Carlyle Street area close to his works and he was a great supporter of the arts and entertainment industry and worked with and organised travelling theatres to come to his grounds. In his position of  councillor he became the leading force behind the construction of the open-air swimming baths at Abertillery, he was however bitterly opposed, yet he single-handedly fought to get the funding to have the baths built. He held fairs at his grounds and used the profits to help fund the building of the baths. He was also at the forefront of the movement in getting a recreation grounds and park constructed and laid-out at Abertillery.

At this time he also worked hard in finding ways of beautifying the area, he introduced tree planting in Carlyle Street and Glandwr Street, there were a line of trees up through the middle of both streets in the early 1900’s, purchased gold-fish and regularly stocked the pond at the park. He also instructed builders to plan for gardens to be laid out on all new house buildings in Abertillery and later he fought for land to be acquired by the council for public allotments.

The Pavilion Theatre.
In 1907 Mr Tilney decided to have his own entertainment hall built upon his land. He arranged for the construction of the old Pavilion Theatre, he made it into a grand theatre with the second largest stage in South Wales next to Cardiff’s New Theatre and with his contacts in the show business he had a vast amount of talent to exhibit.

The Empress Hall.
In 1909 he set out on a new project, the building of the Empress Skating Rink, which later he turned into a Picture Palace called the Empress Picture House.

In 1910 Mr Tilney began to suffer ill health and retired from work. He was living in Carlyle House, Carlyle Street, Abertillery.

On the 1911 census he was living with his wife Annie. It was stated that they had 12 children together. His son Ernest De Caux Tilney, was theatre manager and employer. Mr Harold De Caux Tilney was listed as being the manager of the Public Hall, Abertillery.

In 1915 Mr Athur Tilney reconstructed the old Pavilion and had it fully refurbished and enlarged to accommodate the expanding population. Soon after the project was completed he left Abertillery and moved to Newport.

The Death of Mr Arthur Tilney.
In November 1917 Mr Tilney sadly died at his home in Gold Tops, Newport aged 74 years.
He was buried in Newport and his funeral was a private affair. He was spoke of being a leading figure in the history of Abertillery, a pioneer and visionary!

Points of interest – The featured image was taken in about 1899. The Saw Mills can be seen (centre) of the featured image surrounding the Railway Inn, to the left of the Railway Inn was a Blacksmiths and Wheelwrights which seems to have been later taken over by Mr Tilney. Mr Tilney’s grounds must have been where Carlyle Street was later built. Far right are the out-buildings of the Tin Works.