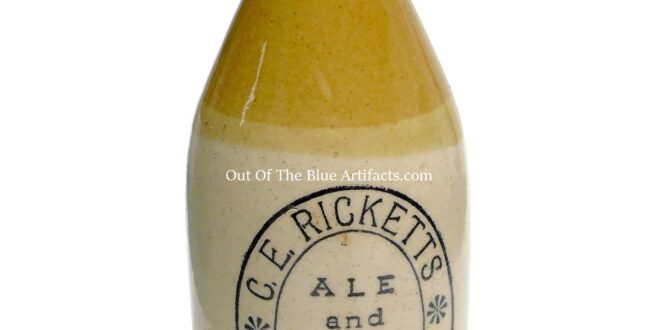 This bottle has a firing fault in the neck, it was caused by a foreign body in the clay as it was being made, which caused the minor eruption in the kiln resulting in the small hole.

Mary Ann Ricketts.
Miss Mary Ann Ricketts was the daughter of Charles and Margaret Ricketts of the Newbridge Inn, born 1859. Mary Ann married Henry Edwards in 1883 and were licensees of the Crumlin Viaduct Tavern.

The Death of Mr Charles Ricketts Senior.
In August 1886 Mr Charles Ricketts senior died and his executors leased the Viaduct Tavern to his son-in-law Mr Henry Edwards. In 1887 Mrs Mary Anne Edwards Henry’s wife was the licensee. Both Henry and Mary Ann had their own stoneware transfer print bottles manufactured with – H. Edwards and M. A. Edwards, ale & porter Crumlin. Edwards of Crumlin also manufactured aerated water which they supplied in glass Dobson patent Codd bottles, these bottles also had a pictorial of the Viaduct at Crumlin embossed into the glass.

Messrs Webb’s Aberbeeg.
In 1895 Messrs Webb’s of Aberbeeg were the owners of the Viaduct Tavern and Mrs Mary Anne Edwards remained licensee.