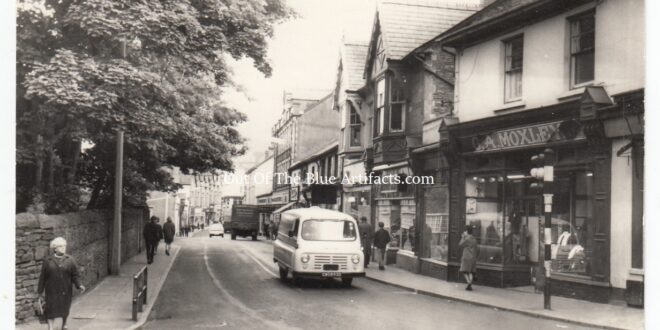 On the 1901 census Mr and Mrs John and Mary Elizabeth Moxley lived at 85 Princess Street, Abertillery.

On the 1911 census the family had moved to 95 Princess Street where Mr John Moxley, at this time was a coal miner. Their sons, Mr David Moxley was an insurance agent, Mr George Alfred Moxley was a gentlemen’s mercer and Mr Leonard Moxley was also at this time a gentlemen’s mercer. At the premises on Princess Street was a servant girl Miss Edith Hawkins born 1894 at Abertillery. A mercer was one who traded in thick fabrics, tweeds and cloth. 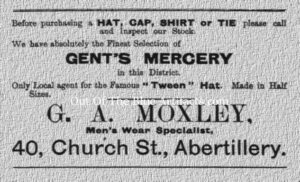 Mr G. A. Moxley’s First Premises.
In 1908 one of Mr G. A. Moxley’s first advertisements stated Mr Moxley as being a men’s wear specialist and gents mercery, his first shop was located at 40 Church Street, Abertillery, opposite the Rolling Mill public house.

Mr G. A. Moxley’s Second Premises.
On Thursday 21st July 1910 Mr G. A. Moxley moved his premises to a shop opposite St Michael’s Church, the shop (as seen in the main featured image above) was listed as being 1 Church Street, Abertillery. 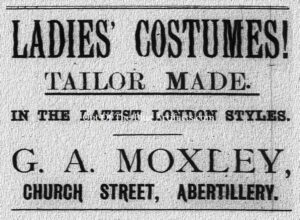 Ladies Wear.
There is a misconception that Mr G. A. Moxley was a men’s wear specialist only,  though in 1910 (as seen in the advertisement right) Mr Moxley stocked ladies wear. He traded such goods for a while until he reverted back to gents wear only.

Notes of Interest – The Abergavenny Chronicle.
In 1864 Mr Edwin Morgan launched the ill-fated Abergavenny Gazette which was printed at Nevill Street, Abergavenny. The Gazette venture collapsed after just a few issues though in 1871 Mr Morgan began publishing the Abergavenny Chronicle and General Record of the Agricultural and Mining Districts, the paper cost 1d. and its editor was Mr W. M. J. Scanlon.

After much success with the Abergavenny Chronicle Mr Morgan moved into larger premises at Frogmore Street, Abergavenny and later at the turn of the century Mr Scanlon was succeeded by Mr George Harris. Upon the death of Mr Edwin Morgan the management of the paper was taken over by his son-in-law Mr Edgar Capel Straker, who ran it until his death in 1939. At this time his role was taken over by his son, Mr Stanley Morgan Straker, who ran the business with his three sisters – Miss Derrie Straker, Mrs Joyce Emily Moxley and Mrs J. S. James as co-directors.
(Taken from the Abergavenny Chronicle Newspaper)

Mr Leonard Moxley.
In October 1930 it was reported that Mr George Alfred Moxley’s sister-in-law Mrs Sarah Lena Moxley the wife of Mr Leonard Moxley had passed away at their home in Newbridge, it was stated that they had once owned a dairy at Somerset Street, Abertillery.