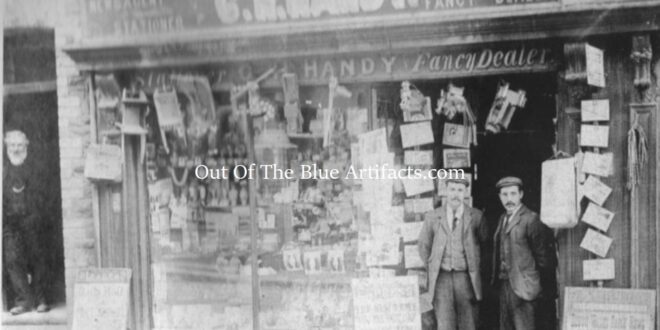 Mr G. H. Handy – Tobacconist and Newsagent.
In 1900 Mr G. H. Handy opened a tobacconist and newsagents and fancy dealer shop at 25 & 26 Church Street Abertillery, opposite where Pritchard’s Chemist is today. The early advertisements showed they were also stationers. Mr George H. Handy was a coal miner and Mrs Mary Ann Handy was the shop proprietor.

Mr George Handy Snr was founder of the Abertillery Co-operative branch, also the treasurer of the Tilliery Colliery Lodge, Abertillery.

The G. H. Handy’s Shop, Church Street.
The shop at Church Street was still under the proprietorship of Mr and Mrs George Henry Handy and later advertised as selling fire works, greetings cards, and later wallpapers and decorators materials.

In 1912 Mr G. Handy and Mr J. Handy were registered as members of the Liberal Snooker Club, Abertillery, they were both listed as Newsagents at Church Street. It is a guess but Mr J. Handy may have been Mr John Handy, the brother of the proprietor of the shop Mr George H. Handy.

The Closure of Mr G. H. Handy’s Shop.
In 1912-13 Mr George Henry Handy and his wife Mary Ann Handy moved from Abertillery and sold the shop. The family moved to Trinant and opened the Pant Shop, at that place.

Mr I. James.
In 1915 Mr I. James moved into the old Handy’s Shop at Church Street, Abertillery and was advertising as selling wallpapers, brushes and varnishes etc.

In May 1918 Mr George Handy senior passed away at his home 13 Cromwell Street, Abertillery.

The Death of Mr George H. Handy.
In November 1934 Mr George Henry Handy passed away and was buried at the Horeb Burial Ground, Trinant.

The Death of Mrs Handy.
In December 1935 Mrs Mary Ann Handy passed away at her residence at Trinant and was later buried at the Horeb Burial Ground, Trinant.