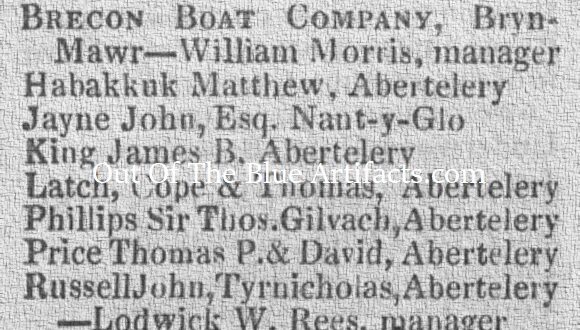 An advertisement from the Monmouthshire Merlin newspaper (as seen left) dated January 1838. It was one of Mr Habakkuk’s colliery levels at Cwmtillery, mistakenly spelt Cwmtellery. At this period in time the area of Cwmtillery extended down the eastern side of the valley of the Tilery River to the Bush Inn at Abertillery.

The John Prujean map of coal levels from 1843 shows the coal levels in the valley, from Mr Thomas Brown’s Colliery (Tyr Nicholas) in the north to the Coronation Level, Penrhiw, Sycpant and Penrhiw Park, to the east with the Cwm and Gilfach at Six Bells listed further south. Cwm Level is more than probably Cwmnant-y-Groes. So, there were not that many collieries or levels listed at this time that were actually situated in the Cwmtillery or Abertillery Valley.

On the 1841 census Mr Matthew Habakkuk was living on his own at Cwm Celyn, Blaina as a mining agent.

On the same 1851 census – Mrs Margaret Habakkuk was listed as head and agent’s wife, born 1800 at Langyfelach, Glamorgan, Wales. (as seen below).

On the Aberystruth Electoral Register dated 1853, Mr Matthew Habakkuk was described as being a house and landowner and was living at Troed-y-Rhiw Lladron. Cwmtillery.

In February 1856, it was announced that Miss Jane Elizabeth Habakkuk daughter of Mr Matthew Habakkuk of Nantyglo, married Mr John Brock, an agent to the Ebbw Vale Iron Works. The wedding was held with a special license.

The Death of Mr Matthew Habakkuk.
In 1861, Matthew Habakkuk was walking through Cwmtillery on his way to the Baptist Chapel when he sadly collapsed and died. His obituary stated he was the oldest and most respected coal agents in the valley. From this time Margaret Habakkuk was listed in various censuses as living with family in different parts of South Wales as an independent and living off her own means.

On the 1871 census Mr David Habakkuk, Margaret’s son, was a furnace manager at Nantyglo, living at number 2 Row, Aberystruth with his wife Mary. David Habakkuk’s sister Mrs Jane Brock and her three daughters were living with them, Jane was listed as being a widow, her occupation at this time was a grocer, her husband John Brock died the previous year.

In 1881 Margaret Habakkuk was living at 69 Morgan Street, Bedwellty with her grand-daughter Miss Agnes Brock.

In 1891 Margaret Habakkuk was living with her daughter Anne Bevan at a lodging house at number 9 Church Park, Mumbles Swansea.

Even though there is no known proof as yet, that Matthew and Margaret Habakkuk were husband and wife, I strongly believe they were, though as Matthew was so busy at the time, it was just a coincidence they were apart when the official census compilers visited.

Points of Interest – The main image is from the 1859 Trade Directory. Information on each of the listed colliery owners (as seen on the list above in the featured image) who operated at Abertillery in the 1850’s were as follows –

Mr John Jayne.
Mr John Jayne J.P., father of Mr Basil Jayne. Born in Blaenavon in 1804, at an early age he entered into the services of Twining & Co Bankers and Tea Merchants, London. He later managed the provision stores of the Clydach Iron Company for several years then moved on to undertake a similar job at the Nantyglo Iron Works but on a much larger scale. He became a director of the Monmouthshire Wagon Company in 1856 with Mr M. Morrison and Mr C. Bailey etc. He became a director of the Merthyr and Abergavenny Railway Company in 1858, along with Mr Crawshay Bailey etc. After he retired, he went on to become the chief proprietor of the Milfrean Hill and Abertillery Collieries, the Milfraen and Tillery Collieries in various partnerships with his son Mr Basil Jayne and also with Mr George Finlay.

Upon the death of Mr John Jayne in 1873, his son Mr Basil Jayne formed the Brynmawr Coal Company to purchase his father’s assets in the Tillery Colliery and the Milfraen Colliery, in 1877 the company was dissolved and Mr Basil Jayne took the collieries over in his own name.

Mr Joseph Latch, William Cope and Mr Thomas.
The Latch & Cope Company were owners of the Arrail Level at Six Bells, now covered over by the waste tip where Jones Omnibus Services were and Squire Cars now occupies. Mr Joseph Latch was a native of Newport, he was a customs officer under King William IV. He later became the Mayor of Newport on several occasions during 1835-1836 and later during 1845-1846, he was also a colliery proprietor. I believe Mr William Cope was owner of a ship company from Cardiff. I am not too sure of Mr Thomas.

Sir Thomas Phillips.
Sir Thomas Phillips had assets in the coal levels at Gilvach, Six Bells. Sir Thomas Phillips born at Ynys-y-Garth near the Clydach Iron Works, close to Brynmawr, Brecknockshire, became the Mayor of Newport in 1839 and was caught up in the battle at the Westgate Hotel during the Chartists riots at Newport where he got shot in the arm. He later fought for the Welsh language and worked along with Messrs T. P. & D. Price the Penybont Tillery Colliery owners (as seen below) along with Mr John Conway (Abertillery Tin Works proprietor) on setting up the very first Reading Rooms at Abertillery in 1856. They also later had support from Mr James Brown from the Blaina and Cwmcelyn Iron Works. The Reading Rooms in question were actually a small room that they rented from Mr William Hiley, close to where the Abertillery shopping arcade is today.

Messrs T. P. & D. Price.
Messrs T. P. & D. Price were Mr Thomas Protheroe Price and Mr David Price, bankers and merchants, brothers from Brecon. They had a long association with the industries at Abertillery, they started sinking the Penybont Tillery Colliery in 1846 and was completed in 1850. They later opened many coal levels in the area from Penybont to Six Bells. In 1858 Messrs T. P. & D. Price entered into a partnership with Mr J. Pearce an old partner of Mr J. Conway and purchased the Abertillery Tin Works. The Price brothers, along with Mr John Conway, were strongly against the “Truck Token” system, where workers were paid in company tokens, they made sure all their workforce (miners and tin workers) were paid in coin of the realm. Mr Thomas Protheroe Price sadly passed away in 1864, after which, apart from a few leases by Messrs Bevan and Brewer the Tillery Collieries were taken over by Messrs Jayne in 1868 and in the following year by Mr John and Mr Basil Jayne and Mr George Finlay.

Mr Lodwick William Rees was Mr Russell’s manager who was in charge of all the business activities at Cwmtillery Colliery during Mr Russell’s tenure.

All the gentlemen featured in the Trade Directory of 1859 who had assets in Abertillery were all closely connected in one way or another. Even though they were all businessmen who had their minds on making money and with much investment tied up in the local industries, they also seemed to have had the best interests of the workforce and their families at heart and the people’s education and advancement at the forefront of all their activities. Mr John Conway of the Abertillery Tin Works was strongly against the “Truck Token” system (where workers were paid in company tokens instead of cash) and in 1850 it was reported that Mr Conway was paying the workforce in coin of the realm. In the same year Mr Conway was offering free train fare to his workers to go shopping at Newport or Bristol (employees’ choice) once a month. This benevolence towards the workforce was carried on in various ways by Capt. Lawrence Heyworth and later by Mr T. W. Powell and his family, later of Powell’s Tillery Co, in the setting up of the Tillery institutes, gymnasium, swimming baths and reading rooms etc.