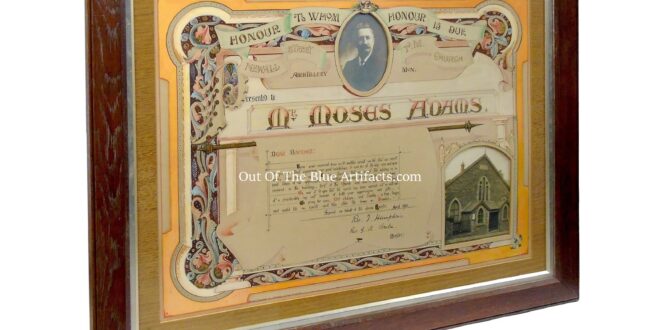 Moses Adams Illuminated Address Presentation.
On Monday 8th May 1911 a presentation meeting and public tea was held at the Newall Street Primitive Methodist Church, Abertillery in connection with the presentation of an illuminated address to Mr Moses Adams, building contractor of Abertillery upon the occasion of the family leaving Abertillery to reside at Waun Fawr House, Risca.

Mr J. Tarrant J.P., made the presentation of the illuminated address, Mrs Carter presented Mrs Adams with a pair of vases on behalf of the ladies.

The writing on the address is as follows –
Honour to Whom Honour is Due:
Newall Street P.M. Church Abertillery, Mon.

Presented to Mr Moses Adams.
Dear Brother:
Upon your removal from us to another circuit we feel that we cannot let you go without expressing our great indebtedness to you for all the help you and your family have been to us. We desire therefore that you accept this address as a small token of our appreciation and gratitude especially for the services you have rendered in the building, first of the Church and now the Sunday School: We owe it to you that the work has been carried out so well and at a considerably less cost because of both your supervision and gifts: We pray for you, Mrs Adams and family a long and happy and useful life on Earth and then after in the home of Heaven:

Designed and illuminated by – Mr H. A. Hiley of 6 Barry Road, Cadoxton.

Mr Moses Adams.
Mr Moses Adams (Contractor and Builder of Abertillery) was born in 1868 at Tredegar, the second son of Moses and Mary Adams of Tredegar, South Wales.

Mr Moses Adams Senior Leaving for the USA.
In October 1880 Moses Adams senior travelled to the USA and left his wife and family at home at Mynydislwyn.

On the 1881 census Mrs Mary Adams was (Head) of the household living at Highland Place, Mynydislwyn with her children – Master’s Robert Adams, Moses Adams, Lewis Adams with Edwin Adams, Arthur Adams and Albert Adams. At this time Moses Adams junior was working as a telegraph clerk.

In the early 1880’s Moses Adams senior came back from the USA and re-joined his family. It is reported that they moved to Abertillery in 1881. 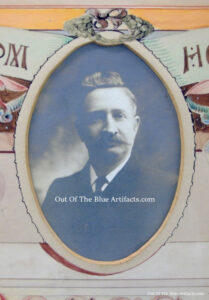 The Turner family were green-grocers in the 1870’s at Market Street, Abertillery. Moses and Emma lived at 60 Tillery Road, Abertillery, Moses Adams worked as a pit banksman, more than probably at the Penybont Colliery, Abertillery.

In 1897 Mr Moses Adams junior became a councillor at Abertillery and later began work as a building contractor.

Mr Moses Adams junior became a very accomplished contractor and builder and was working constructing houses for the colliery company and also carrying out other major building contracts in the area in his own name.

Mr Moses Adams Senior.
On the 1901 census, after the closure of the Forge Hammer Inn Mr Moses Adams senior was living at 69 Castle Street, Abertillery.

In 1904 he became a member at the Liberal and Labour Club, Abertillery later known as the Liberal Snooker Club. Mr Adams was member number 138 and held one-share in the club.

In 1909 he applied to build seven more houses at Gelli Crug Road, it is believed that in recognition Adam Street was named in his honour. He later constructed and sold houses at Newtown, Crosskeys, Risca.