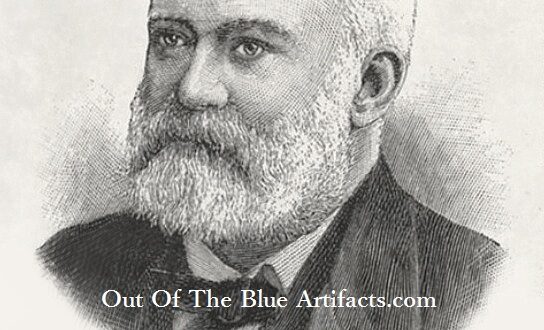 Mr Robert William Kennard.
Mr T. W. Kennard’s father Mr Robert William Kennard was born in 1800 and became a London Merchant, Financier and Entrepreneur. He became the Sheriff of London in 1846 and 1847, Deputy Lieutenant of Monmouth, J.P. for Sterling, Middlesex and Hertfordshire. He was also in the company of Haywoods, Kennard & Co, invested in the Falkirk Iron Company in 1830.

Mr Robert William Kennard later helped to finance the government during the Crimean War 1853-1856. Later he became a Conservative M.P. and later entered the House of Commons in 1857.

He later brought his son Mr Thomas William Kennard and his nephew Mr George Swan Nottage a photographer, into the business.

In 1860 Mr T. W. Kennard was also responsible for the construction of the railway bridge over the River Ebro near Viedola on the Pamplona and Zaragoza Railway. It was constructed by Messrs Kennard for his excellency Don Jose de Salamanca the eminent Spanish contractor. This bridge was made from wrought-iron lattice girders which was made at the Viaduct Works, Crumlin, with the iron cylinders made at Messrs Kennard’s Falkirk establishment.  The length of this bridge was 2,014 feet and was completed in less than 8 months. He also had the contract to build a bridge at Rome, Italy which he accomplished in just one month

In August 1862 Mr Thomas William Kennard was in Portugal to erect an iron bridge which consisted of 3 spans for a railway, the total length being 230′ feet. It contained 2,500 bars and plates, 530 castings, 30,000 rivets and 8,500 bolts, the whole of which had to be manufactured from raw material. The plates and bars were rolled in Staffordshire, were brought to Crumlin where 67,000 holes had to be drilled and punched, rivets put in, all parts fitted together, painted marked and packaged for export, the whole was accomplished in just eighteen days, at this time Mr Kidd was the manager of the works.

Mr T. W. Kennard in America.
Mr T. W. Kennard later went to America and oversaw the building of the Atlantic and Great Western Railway as the engineer-in-chief, he came back to London in May 1865 to give the board of bond holders, shareholders and directors of which – Sir S. Morton Peto, M.P. was chairman, a report. Mr Satterthwaite read Mr Kennard’s report, he told of the update in the building of the extension to Cleveland, the Western Coal-Fields and Silver Creek branches with all necessary stations, sidings and works. The total length of the main line from its junction with the Erie Railway at Salamanca to Drayton was 386 miles.

The Cleveland extension was 51 miles, the western coal branch Franklin to Oil City was 32 miles, the Silver Creek Coal Branch was 6 miles. The Buffalo Division 70 miles, the New Lisbon Coal Branch 30 miles. The Erie and Niagra Canada Branch was 32 miles the company leased for 99 years the Mahoning Railway which was 81 miles total length 688 miles. The present position on the rolling stock was – They had 91 locomotives with 35 under construction, 51 passenger cars with 40 under construction (each capable of carrying 60 passengers, 16 baggage and mail cars, 2,566 freight cars (carrying 12 tons each) and rolling stock to travel between New York and Cincinnati, all to the extent of $5,000,000. The projected income was based on £19 per mile per week with 227 miles open in 1863 to £30. 12s. 0d. per mile per week on 252 miles open in 1864 and up to £62 per mile per week in 1865. This would accrue $11,537,944 before deductions rents and works etc and $4,327,178 net per annum.

The Death of Mr Thomas William Kennard.
Mr Thomas William Kennard sadly died at his residence in Orchard House, Sunbury in Sept 1893 at the age of 68.  Mr T. W. Kennard was such a wonderful engineer, his vast building projects and achievements were outstanding yet his death report was unusually very basic for this time period, the obituary was only a small notice about 7 lines in all news papers.