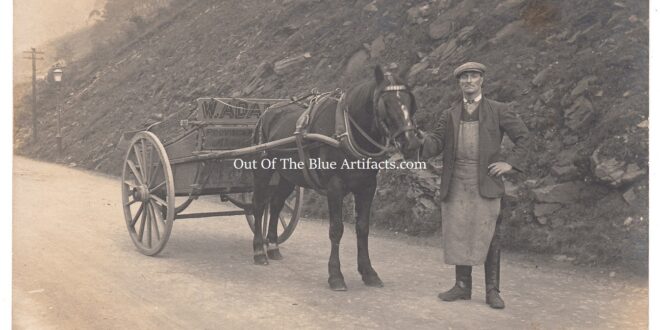 Mr William Adams – Grocer.
Mr William Adams (as seen in the main featured image above) was a native of Abertillery, born in 1870, son of Mr George Adams a coal miner from Blaina and Mrs Cecelia Adams of Llanhilleth. The family lived at the Co-operative Stores Building, Church Street, Abertillery. In 1880 Mr George Adams died at the age of just 41 years and his widow Celia moved with her children to Market Street, Abertillery.

On the 1891 census Mrs Cecelia Adams was listed as a china dealer and was now living at 9 Commercial Street next to Mr and Mrs James and Martha Mundy, fishmongers & grocers. She was living with her then children – Charles, William, Wyndham, Tom, Frank, John, Fred and George Adams. Mr William Adams was working as a grocers assistant at this time. 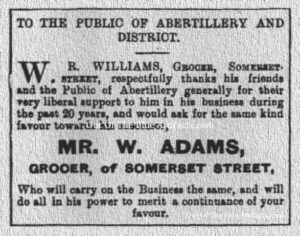 The Grocery Business.
Mr Adams worked at a local grocery business from the late 1880’s and in March 1894 took over the premises and old business of Mr W. R. Williams (as seen in the advertisement left) which was based in Somerset Street, Abertillery.

In the mid to late 1890’s Mr Adams was selling wines and spirits etc from his shop at Somerset Street, Abertillery.

The exact premises of Mr Adams grocery shop is a little hard to pin-point as of the re-numbering and street re-naming systems at the time the Abertillery Town was in its infancy (as seen in the notes below). 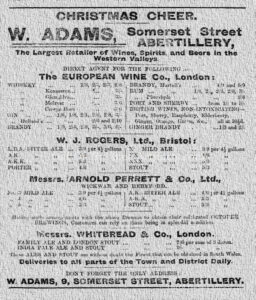 Wines and Spirits Agent.
In the late 1890’s Mr William Adams, grocery and wines provision business was advertised in local papers (as seen right) as being at 9 Somerset Street. It was stated he was the largest retailer of wines, spirits and beers in the Western Valley’s and became an agent for – The European Wine Company, London. W. J. Rogers Ltd, Bristol. Messrs Arnold Perrett & Co Ltd of Wickwar and Hereford and Messrs Whitbread & Co, London. Deliveries were available to all parts of the town and district.

In July 1902 advertisements were placed in the South Wales Gazette for a haulier to work for Mr Adams.

In 1910 Mr William Adams was vice-president of the Grocers and Master Bakers Association at Abertillery, the president was Mr Emlyn Phillips.

In August 1922 Miss Violet Mary Adams, daughter of Mr and Mrs Adams married Capt David Towy Evans B.A., M.C., son of the late Baptist Minister Rev T. Towy Evans. Capt David Towy Evans was assistant commissioner for the National Savings Committee, South Wales Region and was in command of the “A” Company Brecknockshire and Monmouthshire Battalion, Monmouthshire Regiment Territorials. During the Great War he served in France for fifteen months going out with the Cheshire Regiment. He also saw service in Russia with the Kings Liverpool Regiment and was adjutant to the advance column on the River Vada where he gained the coveted Cross of St Anne.

Freemason Association.
Throughout his life, Mr Adams was an active freemason, his mother lodge was St Davids at Rhymney, which he had joined before there was a lodge at Abertillery. He later became one of the founders of the Gwent Lodge which was consecrated at Abertillery on 29th February 1926. He was past master of the lodge and also chaplain. He held many posts in freemasonry, a member of the Charles Lyne Lodge at Newport, and was active in various lodges at Monmouth and became worshipful master there in 1927.

The Death of Mr Adams.
Mr William Adams sadly passed away on Thursday 2nd August 1928 at 58 years of age. He fell ill on July 24th and was taken to the Abertillery and District Hospital where an operation was performed by Dr J. Dunlop, he rallied and seemed to get better, though had a relapse and passed away soon after.

On Tuesday 7th August 1928 the funeral took place at the Parish Church Abertillery. After a short service at his home the cortege left for the Parish Church and for burial at the new Cemetery Aberbeeg. The coffin bore the masonic emblem and the bearers were all past masters of the Gwent or Tillery Lodges and were named as follows – Mr Joseph Simons, Mr A. Moxley, Mr T. Drew of Blaina, Mr S. C. Holman, Mr P. Kocks and Mr Emile Wautier. Rev H. S. Rees performed the obsequies followed by the customary masonic rites.

On Tuesday 4th June 1895 the Abertillery District Council held a meeting at the council offices in which they discussed the street naming in the district, they also decided to discard the old Cwm Street in favour of renaming the whole street Somerset Street and also renumbering all premises along the thorough-fare. Later, number 1 Somerset Street was on its junction with High Street and with the new Pontlottyn Store incorporating many of the individual shops in its vicinity the numbering system changed quite often until the shop buildings were properly established.