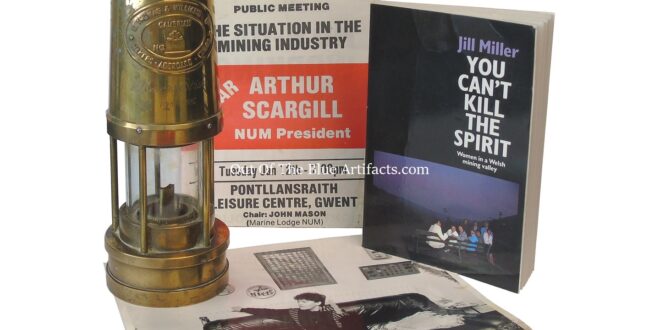 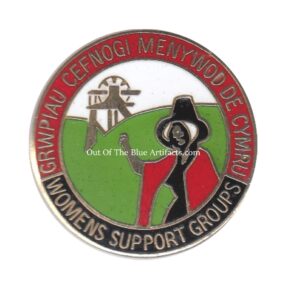 The Women’s Support Group Badge (as seen left) was Pearl Williams actual badge from the time of the strike.

The Abertillery Women’s Support Group.
In July 1984 a group of women from Abertillery, a varied group, some miner’s wives, others with miners in their families and some with no mining connections at all banded together to form the Abertillery Women’s Support Group. The founders of the group were Mrs Doreen Selway and Mrs Jaqueline Gundy, followed by Mrs Pearl Williams; Mrs Jen Mason: Mrs Eileen Liddington; Mrs Lenore McCarthy; Mrs Ann Jones; Mrs Susan Lewis; Mrs Diane Williams; Mrs Meryl Yeandle; Mrs Anita Hollings; Mrs Gwyneth Tucker; Mrs Janice Clayton and Mrs Monica Shannon and Dr Ann Delahunty: (I apologise if anyone is missing from the list, the story is fluid and as more information comes in it will be added to).

The women’s roles were varied, initially the Abertillery Women’s Support Group was established to set up a feeding centre at the Abertillery Institute, they acquired a small stove, and other cooking devices they received food donations, cooked meals on a daily basis and helped ease the hardship of the many miner’s families. The kitchen at the Abertillery Institute was initially providing sixty meals per day, the women worked on a rota basis at the kitchen between 4 and 5 different wives per day. Meals were served between 12.00pm and 2.00pm although the women worked there from 11.00am to 3.30pm preparing, cooking and cleaning, a great deal of work was involved.

Some of the individual members of the Women’s Support Group became more politically aware and apart from organising the kitchen, cooking, handling food donations and helping out in general they later attended political rallies and mass meetings, not only attending but occupying the stage and speaking in public, putting the plight of the miners’ strike over to the audiences from the women’s point of view with great effect.

The Commemorative Miners Lamp.
The featured image shows the commemorative miners lamp presented to Mrs Pearl Williams by the Rose Heyworth Lodge in appreciation of her help during the miners’ strike. Such lamps were also presented to the other members of the Abertillery Women’s Support Group. Engraved “Miners Strike 1984- 85”.

The commemorative miner’s lamp was made by Messrs Thomas and Williams Ltd, Aberdare, Wales with the serial number 158287. Size 10″ x 3 1/2″ inches.

Black & White Photograph.
The black and white photograph shows Pearl at home in 1984-85 (Copyright Mrs Jenny Barnes) Abergavenny during her visit to Abertillery and district whilst taken photographic images of the miners and their families for a then forthcoming exhibition.

Featured Items.
All the items featured in the image above was kindly donated to the site by Mr and Mrs Jeff and Pearl Williams. They form part of a tribute to the wonderful work undertaken by the individual and combined efforts of the ladies of the Abertillery Women’s Support Group 1984 – 1985.