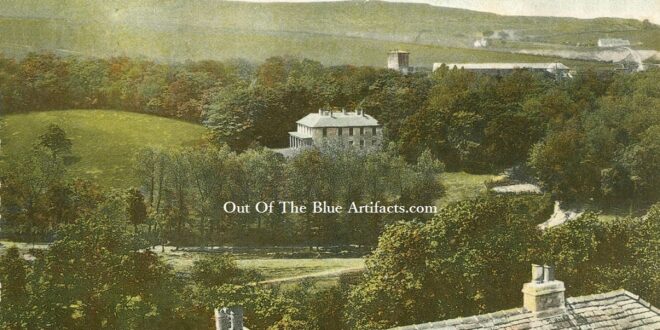 Nantyglo House.
In the early years of the iron & coal industry at Nantyglo it was thought that Messrs Joseph and Crawshay Bailey had the round houses or towers built, I have searched for a construction date and a reason for them but can’t find information. The consensus was that they were built between 1810 and 1822 to possibly protect the brothers from their disgruntled workforce when needed, though the closest I came to those dates was a news report from 1816 when there were widespread riots in the area and stretching from Blaenavon, Nantyglo, Ebbw Vale and Sirhowy  to Llanelli, though this was too early.

In early 1832 there was discontent in the area over the cut in wages and a stoppage of labour at the works was called until the owners paid the proper wage, though there were a lot of strike breakers undermining this call and the masters didn’t take the threat seriously so a secret band of men was assembled and they attacked various places to strike terror in the strike breakers of the neighbourhood and to force the masters to concede, this band of men called themselves “Scotch Cattle” and conducted many hit and run missions.

March 1832 the owners asked the government for help to combat these men at this time and the ministry ordered a battalion of the 98th Regiment to Nantyglo, also a troop of the 14th Dragoons under the command of Capt Smith who was accompanied by Capt Ellis a magistrate, the battalion was stationed at Abergavenny, they were to patrol the valleys and hill tops. The next day the 11th Regiment of Foot arrived from Cardiff and were more effective in patrolling the boggy mountainous terrain. The local people protected the identity of the Scotch Cattle and a large reward of £150 was placed for any information of the gangs whereabouts though it had no effect. The officers of the regiments were lodged and accommodated by Mr Thomas Brown and the magistrate who accompanied them stayed at Mr Joseph Bailey’s home.

In April 1832, five men, all members of the Scotch Cattle were captured and took to the Brecon Assizes  – Mr Edwyn Williams, aged 31; Mr David Lloyd, aged 23; Mr Henry Davies, aged 29; Mr William Hughes, aged 22 and Rees Williams, aged 28; were placed before the bar, the prisoners pleaded guilty, though through a very unusual act of clemency on behalf of Messrs John Russell and Thomas Brown of the Blaina Works, the men of the Scotch Cattle were bound over to keep the peace, they were all discharged and told that the masters did not wish to procure severe punishment on the offenders but that the case was a warning that they should bear in mind that the law would not tolerate the actions. Upon their release they said they were grateful for the lenient manner in which they had been treated.

The Newport Corporation Visit to Nantyglo.
Another interesting fact in connection with the towers came from an article in the Monmouthsire Merlin in September 1863, Mr Crawshay Bailey invited the Newport Corporation to his Nantyglo House for a meeting and luncheon. The party was introduced to Mrs Bailey and they had a ramble around the grounds inspecting the vineries etc. Dinner was served to the party and the menu was turtle soup, venison, oyster patties, partridges were among the delicacies with which the table was loaded, besides which were more substantial joints and the good old English baron of beef.  Deserts were plenty, including the queen pineapple and quantities of wine.

The Round House and Tower Mystery?
During the visit by the Newport Corporation, a journalist accompanied the party and conveyed what was told by the host Mr Crawshay Bailey. He reported that the Nantyglo House was sheltered from the vast Iron workings, noise and smoke by a thick wood and in the gardens at the front of the house were 2 Chinese cannons, placed on the lawn that had been given to Messrs Bailey Bros by the government for protection during the latter half of 1839 over concerns with the Chartist’s Movement, he was also told that there was “a tower erected on an eminence”, a piece of high ground adjoining, “which was built and supplied with guns to protect the vast stock of gunpowder (used by the company at their many mines in Nantyglo) at that volatile time during the Chartist’s uprising”. This may well be the real reason why the towers were erected!

The mystery is, during the visit by the Newport Corporation, why would Mr Crawshay Bailey tell the journalist that the tower was built to protect the gunpowder stocks at the time of the Chartist’s uprising if they were constructed 30 years prior to this interview? Are all the history books wrong in guessing the erection dates of the 1810’s-1820’s and maybe the towers real purpose was to protect the stock and actually built much later, in 1839 as suggested in the report. 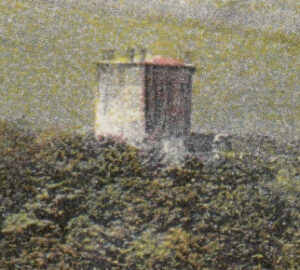 No.6 Stable Pit.
The (main featured image above) shows a tower in the background, the image magnified shows the tower as a square design and also with what looks like an external staircase and large windows.

This is a Cornish Beam Pump-House (now long gone). It was built to pump water from the underground workings and was connected to the No.6 Stable Pit just south of the round tower, which at this time is a ruin and can be seen just in front of the pump-house.

The Death of Mr Crawshaw Bailey.
Mr Crawshay Bailey sadly died in January 1872 at his residence at Llanfoist House, buried in the family vaults at Llanfoist on Tuesday 16th January 1872. His will was released in the following March in which was said to be sworn under £160,000. The trustees and executors were Mr Crawshay Bailey, (son); Mr William Bailey Partridge, (great nephew); and Mr John Berry Walford. In his will he granted to his nephew Mr John Crawshay Bailey, the son of Joseph, £4,000. He left annuities to his three great-nieces, many legacies to other relatives and friends, annuities to his housekeeper, butler and nurse and legacies to his other servants. He left the interest of £15,000 to his daughter Jane, for life and after her decease, to her children.

He disposed of his interests in the Ironworks at Monmouth and Brecon and his business in Liverpool. All his shares as Ironmaster and Iron Merchant carried on at Nantyglo and Beaufort under the name of J. & C. Bailey and at Liverpool under the name of the Bailey Brothers and Co to his two nephews – Mr William Latham Bailey and Mr Henry Bailey in equal shares. He left the Varteg Iron Works and mines of coal, iron and other minerals to his great nephew Mr William Bailey Partridge (of the Partridge Jones & Co) His estates in the counties of Monmouth, Glamorgan, Carmarthen, Brecknock, Hereford, Surrey, Essex and Middlesex to his son Crawshay Bailey Jnr of Maindiff Court, Abergavenny whom he appointed residuary legatee.

Mr Thomas Brown.
In 1876 Mr Spencer left the area and Mr Thomas Brown Esq took the vacant role as manager and lived at the Nantyglo House.

The Sale of the Works.
In 1877 the company sold a lot of their property including the mines, workings and real estate.

Mr Samuel Lancaster.
In 1878 Mr Samuel Lancaster brother of John Lancaster was in charge of the collieries and works and made the Nantyglo House his home. Mr S. Lancaster sadly died in 1883, reports said that his funeral procession from the house to Blaina was one of the largest the town had ever witnessed.

Alderman Morgan.
In the 1890’s it was occupied by the Alderman Mr Morgan, Mr Morgan was a pioneer of Liberalism in the district. The house was later occupied by a few different people in the late 1880’s early 1890’s. In October 1894 it was put up for auction along with Ty-Dafydd and Hafod-y-pwll but was not sold, the chairman of the Lancaster Co Mr J. Dakers purchased the latter for £600.

The Franciscan Monks.
In October 1904 the Nantyglo House was reopened to house a colony of Franciscan Friars who had emigrated to Wales as a result of the expulsion decrees of the French government.

Messrs J. and W. Stone.
In 1906 a local news report covering the details of a court case in connection with a theft at Nantyglo stated the theft had occurred in the grounds of Nantyglo House – the property of Messrs J. and W. Stone, colliery proprietors, though the story is a bit vague but it seems the House was occupied by them at that time. There is no news on Nantyglo House from then until 1910.

In November 1910 the Bedwellty Board of Guardians wanted to purchase the Nantyglo House as a Branch Workhouse for the area of the Western Valley’s.

The Later Years.
There is no mention of the Nantyglo House after 1910, I have heard people say it was known as Ty-Mawr (Big House) though I cannot find any information on the house under this name. On all official maps, ordnance or land property maps and even the Messrs J. & C. Bailey land ownership and lease maps it’s known as Nantyglo House.