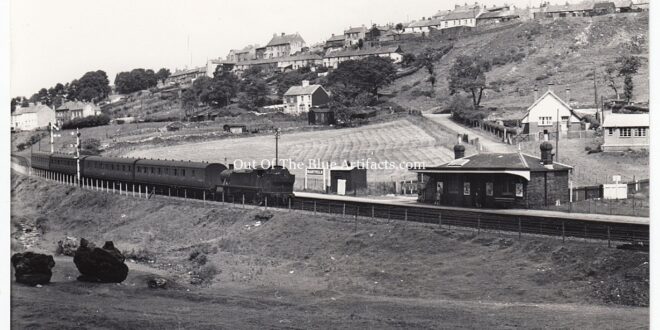 Nantyglo Railway Station.
In 1858 the Monmouthshire Railway and Canal Company entered into negotiations with Messrs Bailey of the Nantyglo Iron Works for a lease of their railway from Coalbrookvale to Nantyglo where they wanted to erect a railway station for passengers and goods. Permission was granted and the planning began.

By 1859 the Nantyglo Railway Station was under construction. Newspapers were reporting the extension of the railway line from Blaina to Nantyglo and the construction of a station on the terminus of the line north of Coalbrookvale and just south of the Nantyglo Ironworks. 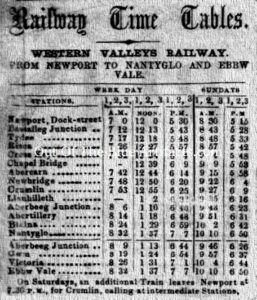 The Official Opening of the Nantyglo Station.
On June 25th 1859 the Monmouthshire Merlin, newspaper reported the line to Nantyglo had been completed and was open. Later the same month new railway timetables were published which included the extension to the Nantyglo Railway Station. The route from Newport took in the stations – Newport, Dock Street, Baselleg Junction, Tydau, Risca, Cross Keys, Chapel Bridge, Abercarn, Newbridge, Crumlin, Llanhilleth, Aberbeeg Junction, Abertillery, Blaina and Nantyglo. From the Aberbeeg Junction to Cwm, Victoria and Ebbw Vale.

Brynmawr to Abergavenny.
In June 1862 Messrs Greene and King, contractors announced they had connected Brynmawr with Abergavenny by rail.

The Missing Link, Nantyglo to Brynmawr.
The main line from Newport up through the valley terminated at Nantyglo, anyone having to visit Brynmawr on the Monmouthshire Railway and Canal Company railway would have to alight the train at Nantyglo and complete the rest of the journey to Brynmawr by horse and cart or by foot. This non-existent length of line between Nantyglo and Brynmawr was named the “Missing Link” and was the subject of many debates in connection with transportation in the valley.

The Nantyglo to Brynmawr Missing Link.
As stated, the stretch of non-existent railway line between Nantyglo and Brynmawr had long been debated and the need for a rail link was wanted. Mr Crawshay Bailey had laid a rail line though its purchase was shelved as of the sale of the iron works. In 1903, after years of deliberation the companies concerned decided to venture into a joint undertaking and to finally link Nantyglo and Brynmawr with a railway line.

The Official Opening of the Missing Link.
On Wednesday 12th July 1905 the new rail link was officially opened in the presence of the Duke and Duchess of Beaufort. After the official greeting the Duke and Duchess boarded a special train made up of nine coaches and a saloon coach, driven by Mr John Baker of Abergavenny travelled to Nantyglo, there, after being received by the station master Mr Goodern the train reversed back to Brynmawr on the return journey. Back at Brynmawr a luncheon was held at the Market Hall, Brynmawr.

The photograph in the main featured image above is copyright and was kindly provided courtesy of Mr Michael Hale/The Great Western Trust.

Ticket Collection and Examination.
In July 1921 it was announced that there would be no examination or ticket collection in trains at Nantyglo Station. The Brynmawr Station was made a closed station and all tickets were to be dealt with there.

British Automatic Sweetmeat Co Ltd.
In October 1921 the vending machines were still at the Nantyglo Railway Station and installed by the same company, though now under the name of the British Automatic Sweetmeat Co Ltd. The company were still having trouble with young boys using fake money pieces to get chocolate from the machine and in this month Mr John Harold Jones, the station clerk had found 113 pieces of cut tin in one of the vending machines. Three fourteen year old boys were caught and they admitted to putting in at least 69 pieces of tin in the machines to gain 60 bars of chocolate. Their parents were fined and ordered to pay 5s. each in costs.

The Extra Tracks and Livestock Accommodation.
In November 1923 the Great Western Railway Company provided extra accommodation for livestock at the Nantyglo Station. Previously only one track could be berthed at one time though now three can be accessed. The doubling of the line between Blaina and Nantyglo was still being debated along with a connection from Cardiff to Nantyglo, though the doubling of the line between Nantglo and Brynmawr was turned down by the company as of lack of traffic.

In Dec 1930 the large goods shed at Nantyglo Railway Station was demolished.

The Closure of the Line for Passengers and Goods.
All passenger and goods traffic ceased the 30th April 1962. The railway line was later removed and its route up through the valley is now the main road, the A467.