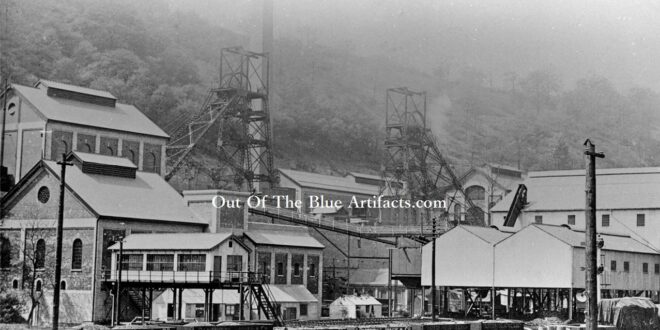 On Friday 9th August 1907 Messrs Partridge, Jones & Co announced in the local newspapers the commencement of their sinking operations at the Navigation Colliery, Crumlin. It stated that other influential colliery investors are associated with the enterprise.

The Site of the Colliery.
They stated the site was being on the Trinant side of the River Ebbw between Bowen’s Foundry at Crumlin and the Royal Oak Hotel at Llanhilleth. The sinking process would begin in the next few weeks and that over 300 men will be engaged in the work which will take about 3 years to complete.

Lack of Local Accommodation.
On Wednesday 3rd June 1908 Mr John Ward M.P. for Stoke and the secretary of the Navvie’s Union raised a question in the House of Commons by asking the president of the local board whether his attention had been called to the lack of accommodation for the men employed in the sinking of the new pits at Crumlin, Monmouthshire. The accommodation of the place was used up and the men were paying 4d. per night to be allowed to sit up in certain lodging houses and that these houses were using the beds double-shifts day and night causing hardship to the men.

A Pit Sinkers Fight.
In a report a while later a sinker had caused a riot in the Royal Oak Hotel, Crumlin when he had met his landlord and had been so aggrieved with the way he was being treated he pulled a knife and attacked him, a few of the men in the hotel intervened and gave the sinker a good beating. He later appeared in court and the magistrate let him off by saying he had been punished enough by his black-eye and bruised face.

A Progress Report.
In March 1910 the company released a statement that said the collieries were proceeding satisfactorily and that Mr W. H. Routledge of Blackwood was in charge of the works. Also it was hoped that the winding of coal would commence at the close of the year.

In April 1910 a report of the progress of the collieries stated the shaft of the Navigation Colliery, Crumlin was 300 yards deep and the black vein would be reached in another 100 yards. At present about eight yards was being sunk per-week and it will be some time before the works will be finished. It was also reported that a number of company houses were being erected.

In March 1911 the Messrs Partridge, Jones & Co Ltd issued their annual report. It was stated that The sinking of the company’s new pits at Crumlin had been continued throughout the year, the South Pit was completed and its total depth being 515 yards or 1,545′ feet deep. It was expected that the sinking of the North Pit will be completed in about three weeks. The directors had acquired a freehold farm of 147 acres in extent situate within easy distance from the collieries.

The Official Opening of the Navigation Colliery.
No official report is available at the moment.

The Deepening of the Colliery.
In July 1920 the No2 shaft was deepened from the Black Vein Seam, the sinking operations went down 70 yards to the Meadow Vein Seam. The company said that it would not interfere with the production at the colliery.

The Crumlin Navigation Miners Institute.
On Tuesday 9th October 1923 the South Wales Gazette reported – The foundation stones for the Crumlin Navigation Miners Institute were laid. Situated close to the low level railway station the institute will contain reading rooms, two committee rooms, a ladies room, a games room billiard rooms containing five tables, a wireless room and a caretakers living quarters. The building which cost £18,500 was built of brick, with Forest of Dean stone dressings, concrete floors and was all fire-proof.

The Contractor and Architect.
The contractor was Mr Richard Jones of Caerphilly. The Architect was Mr Gabe Jones of Hengoed.

The four foundation stones were laid in turn by – Lord Treowen; The Rt Hon T. Richards M.P.; Mr F. A. Smith and Captain Mason:  Mr H. Hopkins pointed out that the institute had originally been planned in 1914 and tenders were put out, though the outbreak of the Great War meant that it could not be proceeded with but the load had been held up indefinitely. They were in a position where they were unable to raise funds and realising their obligations to the men who had already paid their contributions also their legal obligations to the Llanover Estate, they appealed to Lord Treowen to relieve them of their liabilities.  His Lordship relieved them of their obligations for five years though after the war they were in a similar financial position and appealed to his Lordship and his co-trustees once again who agreed to release them of the last portion of the liability. The Partridge, Jones & J. Paton Co agreed to provide a substantial sum and later doubled it. The committee also asked for financial help from the Miners Welfare Committee to which Captain Mason came to Crumlin to cross the t’s and dot the i’s.

Description of the Building.
The Crumlin Navigation Miners Institute consisted of – The ground floor are the local branch of the National Provincial Bank, the local Employment Exchange and three lock-up shops. On the first floor are the assembly hall (which can be divided into two committee rooms), a lending library, billiards room and the top floor are secretary’s office, games and wireless room and the caretakers quarters etc. The roof is flat and can be used for dancing and entertainments of various kinds.

Mr T. Morgan (Secretary) said the amount of the grant received from the Welfare Fund was £4,840. The Income from the shops and bank would be £400 per annum. He acknowledged the help rendered by Lord Treowen, Mr F. A. Smith (Colliery Agent), Messrs Partridge, Jones and John Paton the proprietors of the colliery who had granted the committee a loan of £4,000 and Mr Vivian Phillips (Chief Manager of the Collieries) who had been the business brains of the committee and without whom the institute would never had existed.

The Colliery Fire.
On Monday 8th February 1925 the engine house at the Navigation Colliery, Crumlin caught fire and the Abertillery Fire Brigade under Capt. W. J. Rancombe and Supt. A. G. Thurling were called out, they were aided by the Abercarn Brigade under Capt. Booth. The firemen used 1,200 feet of hose in order to obtain water from the river. There were fears that if the housing of the winder completely burned out the cages would fall to the bottom of the shaft. After the fire was extinguished the pit remained closed for repair for a few weeks and over 800 men were out of work. On Monday 22nd February the repairs had been completed and the men returned to work.

The Pit Head Baths.
In February 1933 the Navigation Collieries Pit Head Baths were officially opened, the estimated cost was £18,000 and provided baths accommodation for 800 men. The bath house contained 140 cubicles in glazed brickwork, locker rooms, bottle filling and drinking rooms, attendants, boot cleaning and greasing rooms together with a first-aid room. The chairman of the committee was Mr Vivian Phillips M.E. The honorary secretary was Mr Richard Sheridan and the baths superintendent was Mr Charles Sheridan.

The Flood in the Colliery.
In the first week of June 1938 the Navigation Colliery at Crumlin was in danger of being flooded by a enormous inrush of water, in the opinion of some mine experts the water was coming from a natural underground reservoir. The original thought was that it was draining from other mine workings in the Western Valley’s though fact that the water was clean and fresh and not discoloured did not lend force to this theory.

About thirty workers had been retained to work shifts day and night to try and dam the inrush, the men were using quick drying cement and steel girders and had damned the gate and return roads. The company decided not to talk to the press, though the mine experts had told them that around 200,000 gallons were sweeping through the workings per hour.

The dams were 3′ feet thick and erected to stop the water from reaching other parts of the colliery, though one big problem was that of foul air, resulting from the water affecting the ventilation. For work in the colliery to be resumed the men had to embed iron pipes into the dams for the water to be pumped to the surface via the roadways and shaft.

The reporter wrote that the surface of the colliery was littered with empty bags of cement and salvaged machinery brought to the surface as the water broke through, though as it was such a rapid rise in the inrush of water it resulted in hundreds of pounds worth of machinery being left in the flood. The many horses were taken up the pit at the first chance and were put out to graze in the surrounding fields and they looked well cared for.

Mid week an official from the Messrs Partridge Jones and John Paton told the press that the men at the colliery affected by the flood water had been put on the regulation weeks holiday with full pay. He also stated the colliery should re-start within a week. A few days later the reporter had written that the dams had held and the threat was over, there was no more cause for alarm at the Navigation Colliery, Crumlin.

The Closure of the Navigation Colliery.
On Friday 15th September 1967 the Navigation Colliery, Crumlin closed. There had been negotiations between the National Coal Board and the National Union of Mineworkers though owing to the depleted coal reserves the colliery which employed 312 closed, though even though quite a few men would finish at the colliery the board had offered the others jobs in neighbouring collieries. The workforce were allocated 40 jobs at Llanhilleth Colliery, 110 at Tirpentwys Colliery, 43 at the Celynen South with 7 at the Celynen North Collieries, 6 at Waterloo Colliery, 5 at the Marine Colliery with 10 at the Rose Heyworth Colliery. It was announced that 33 men would be kept on at the Navigation Colliery for salvage work.

The Later Years.
The site is still occupied by the ruins of the colliery, the red-brick chimney has a slight twist in it from bottom to top. And there is a group currently working to preserve the buildings and its history.