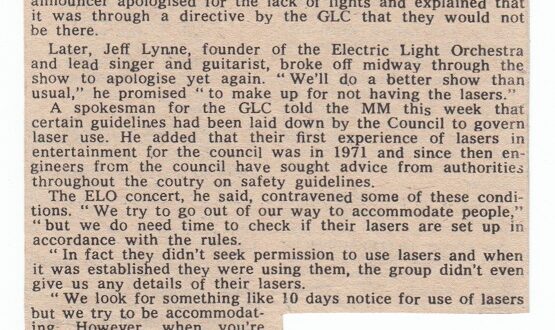 The concert at the New Victoria Theatre was originally planned to take place on Saturday 8th May 1976 but was cancelled. It was rescheduled for Sunday 20th June 1976. The Electric Light Orchestra wanted to use the lasers in their show but the G.L.C. were unsure what effects such lasers had in public and deemed them too dangerous to be used.

A spokesman for the Greater London Council told of how certain guidelines had been laid down by the council to govern laser use. Their first experience with lasers was in 1971 and since then engineers from the council had sought advice from authorities throughout the country on safety guidelines.

The Electric Light Orchestra seemed to have contravened some of the conditions and there was no time given for the council to set up the lasers to see if the lasers were in accordance with the rules. It was stated that E.L.O. did not seek permission to use lasers and even when it was established they were using them they they did not give the council any details of the lasers being used. The council wanted ten days notice and has the shows were rescheduled it was stated by the council that only 12 hours notice was given, therefore there was no time to accommodate them.

It was reported that the concert was filmed for a one hour Mike Mansfield Show, to be broadcast on London Weekend TV on 30th July 1976.