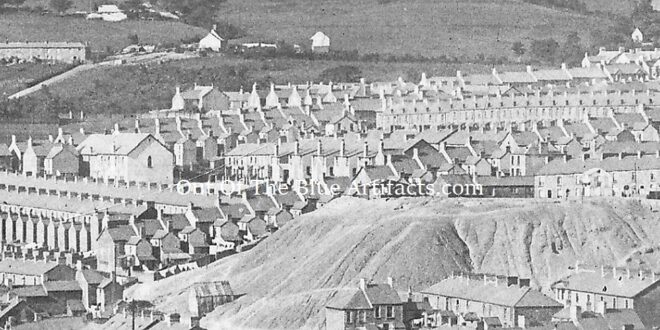 Newall Street Methodist Chapel.
On Monday 8th May 1905 at a council meeting plans were put forth for the erection of a Primitive Methodist Chapel at Newall Street, Abertillery. The chapel was built to ease the overcrowding at the Methodists Chapel on Somerset Street and was to be its sister chapel.

In 1906 the building of the chapel started. It was built on the corner of Evelyn and Newall Streets (as seen centre left on the featured image above) on the Gelli Crug Estate on land given by the Powell’s Tillery Colliery Company.

The Contractor and Architect.
The contractor was Mr Moses Adams and the architect was Mr W. H. Tarrant.

The Official Opening of the Chapel.
The opening of the chapel was celebrated over two consecutive Sunday’s, the first was on Sunday 15th July 1906. The opening service was by conducted by Rev Enoch Hill, on holiday from America and who had left this district in 1880. The choir was conducted by Mr T. Carter, Mr John Webber accompanied at the organ. Mr T. Preece had presented the chapel with a pipe organ but at the time of opening it had not been fitted. Mr and Miss Lawrence of 3 Adam Street, Abertillery gave a gift of a pulpit Bible and a hymnal

On the 22nd July, the following Sunday, the opening services continued with Rev J. H. Brigg of Norfolk and Rev J. Marks Evans of Abertillery conducting the services. Tea was provided by the following – Mesdames – W. Padfield; E. Gunter; K. Plummer; E. Carter with Miss Adams and others and Mr Frank Lawrence: In the evening entertainment was provided by Mr A. Tilney with a full programme consisting of the following – Mr Alfred Steer and party; Mrs Richard Howells; Misses Green, Price and F. Carter; Messrs R. Lewis and G. Jones accompanied by Mr J Webber:

Description of the Building.
The chapel was constructed by Mr Moses Adams in the Gothic style, built with pennant stone facings and Ebbw Vale brick dressings. The interior had dado all around and the ceiling was pitch-pine match board. The ground work was done by members to ease the cost of construction. The painting work was done by Mr R. J. Ayers, decorator of Abertillery and the heating was installed by Mr Perman, engineers of Abertillery. The chapel accommodated 400 worshippers and was built at a cost of £850.

The Later Years.
The chapel has since been demolished with housing built on the site.