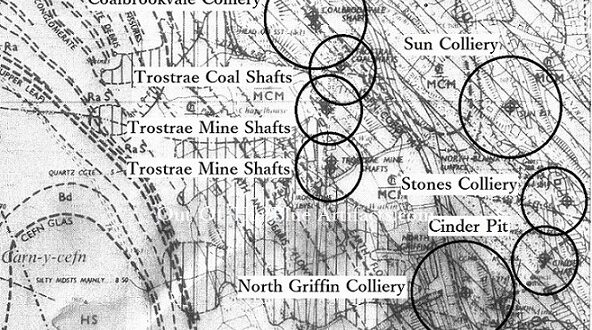 Peggy’s Pit Coalbrookvale Nantyglo.
There isn’t a great deal known about this colliery, though it was a deep mine with quite a few men employed there. It was situated close to the Ffosmaen Colliery and on the image can be seen the both collieries and an air-shaft (top right of the image).

In 1890 it was owned by the Coalbrookvale Colliery Company. Messrs Barnes & Co.

In July 1891 a full examination of the underground workings took place by the workmen’s examiners, it reported that the mine was in good order, free of gas and all roof and sides in good shape, with the exception of Thomas Lewis’ Heading, though it was put right in the presence of the examiners, the roads and returns in the Bydelog seams were all in good order with good ventilation. The shaft was examined and found to be in good order. The two Examiners were – Mr David Price and Mr William Llewellyn.

On Sunday Morning April 1892 Mr Isaiah Humphrys and his two sons descended Peggy’s Pit, Coalbrookvale to attend to the 10 Horses, though upon reaching the underground stables they found seven suffocated while the remaining three were in a state of exhaustion and were struggling for life. The three ostler’s also became affected by the gas and the father fell unconscious from its affects. he was taken to the surface by his sons who had managed to withstand the fumes, all having a narrow escape. It was later explained that a fall had occurred in the return wind-road that had obstructed the passage of the foul air.

This list only goes to show the money collected and donated to the fund by the Peggy’s Pit men was quite substantial and there must have been quite a few miners working at the colliery.
Peggy’s Colliery was not mentioned in any reports after 1900.

The Stones Colliery.
(Information on another page)

The Cinder Pit.
(Information on another page)

The North Griffin Colliery.
(Information on another page)

Coalbrookvale Colliery.
(Information on another page)