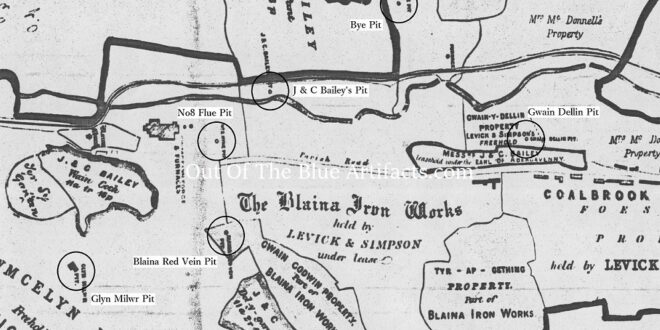 North Griffin Colliery – Bailey’s Pit, Blaina.
The Griffin Colliery was locally known as Bailey’s Pit and was along with all the deep mines in the area originally a water balance pit. The colliery was situated just north of Inkerman Row, West Side, Blaina. The colliery is shown on the section of the Messrs J. & C. Bailey brothers sales map of 1877 (as seen in the main image above). There were at least two slightly different maps printed and are about 5′ foot by 2′ foot in size and shows the land owned or leased by the brothers from the area of the Nantyglo Ironworks down to Aberbeeg.

The Early Shaft Accident 1855.
The earliest mention of the colliery was reported in the Star of Gwent newspaper on Saturday 24th November 1855 which stated that an accident occurred on the previous Monday 19th November 1855, the report was as follows – A fatal accident at Blaina, two colliers named Mr Edward Davies and Mr James Tucker were on a platform ready to descend “Bailey’s Pit” when the machinery ran wild and the men descended the shaft eighty-yards at a frightful velocity. Mr Davies was taken out dead and Mr Tucker was slightly injured.

The 1869 Colliery Explosion.
On Monday 7th June 1869 the Western Mail Newspaper reported the following – An explosion at Bailey’s Pit, the “Griffin”, Blaina, occurred on Saturday 5th June 1869. Mr Benjamin Jones, Mr William Lloyd and a boy by the name of Vaughan were severely burnt from an underground explosion.

The Aberbeeg Railway Crash.
On Tuesday 12th December 1871 the Reading Mercury newspaper reported twelve trucks laden with iron ore broke free from their couplings at the Griffin Colliery, Blaina and run free down the valley towards Aberbeeg. Mr James Phillips an old driver for the company was coming up the valley to Cwmtillery with his engine and empty coal trucks heading for Abertillery Junction. Mr Phillips was late though stopped at Aberbeeg to take on sand and water. Before he could set off on his journey the master at the Aberbeeg Station was alerted to the runaway wagons though it was too late, they smashed into his engine and trucks, the impact was so severe it killed Mr Phillips, the stoker was said to have jumped clear of the collision.

The inquest said that if Mr Phillips engine had been on time that night it would have arrived at Abertillery Junction and missed the runaway from Blaina, the report stated that a passenger train was due at Aberbeeg at the time and but for the goods train being in front, a frightful accident with the loss of many lives was averted.

The Conversion from Water Balance Winding to Steam Power.
On Saturday 28th November 1874 the Merthyr Express newspaper issued an article by its correspondent. He wrote on the reported change over from a water power to fire and steam power, he noted that the Griffin Colliery was to install a double engine of the latest construction which worked on the same principle as the locomotive. The engine and apparatus and all gearings connected with it had been fitted up well, so that it would tax the strongest mechanical faculties to accomplish such an undertaking any better, it reflects much credit upon its constructor and fitter. It was stated that the Griffin Colliery was located on the eastern side of the Western Valley’s Railway and the winding engine was located on the western side of the railway with a space of thirty to forty yards between them with a strong lofty wooden bridge across the line forming a traffic road from the one to the other. It was estimated by mechanics that the new engine was able to draw five-hundred or six-hundred tons of coal per day out of the shaft at 100 fathoms deep equal to six-hundred feet deep.

On Thursday 3rd December 1874 the Manchester Courier and Lancashire General Advertiser printed the Nantyglo and Blaina Ironworks Company’s annual report. In the report it was stated that the company had converted the Griffin Pit, it had applied steam power in lieu of the old fashioned and slow winding water balance at the Griffin Colliery.

Sales from the Nantyglo and Blaina Company’s Works.
In December 1874 the company also reported that weekly sales were 3,500 tons. Between January and August they had sold 72,365 tons and they had sent three consignments of coal to the Mediterranean with most satisfactory reports. They had purchased 40 wagons, made a railway link between the Blaina Works and the Nantyglo Works independent of the Monmouthshire Railway Company to avoid tollage and had made Mr Thomas Spencer general manager of the works from the previous June.

Mr E. Harris.
In 1877 the colliery was taken over by Mr Edmund Harris (coal contractor) under lease from the Nantyglo and Blaina Company.

In the early 1880’s the new company decided to sink a new pit south of Blaina behind the Tilers Arms near to where Bournville would later be situated. After this new sinking venture the Messrs J. Lancaster & Co adopted and carried on the name Griffin for their future colliery sinkings, i.e. South Griffin No’s 2 and 3 and also the Arrael Griffin No’s 4 and 5 at Six Bells.

In consequence of the naming of the collieries in the area the original Griffin Colliery at Blaina was renamed North Griffin No 1. The company also used it as a trade-mark crest and the legendary creature the Griffin was portrayed on their coal wagons and the decorative plaster moulding above the entrance of the Arrael Griffin Miners Institute at Six Bells.

The 1887 Flood.
Saturday 8th January 1887 the colliery was seriously flooded when water broke into the pit from older workings, it was stated that it would take some months to get the colliery back to normal working conditions. Over 300 men were out of work though the Lancaster Company made arrangements to transfer the men to other collieries belonging to the firm.

Landslide at West Side, Blaina.
In May 1915 it was reported that a block of six dwelling houses in Alma Road Blaina were being threatened with destruction by a landslide that was taking place on the mountain known as West Side. The old waste tip from the North Griffin Colliery had been gradually sliding down carrying the hillside with it.

Closure of the Colliery.
The North Griffin Colliery closed in 1907.

Points of Interest –
It is a mystery as to where the name Griffin originated, it was in use as the official name for the colliery from at least the early 1870’s from the time when the Nantyglo and Blaina Company owned the colliery or even earlier and it was adopted and carried on under the ownership of Messrs J. Lancaster & Co. I have one or two theories and will have to research a possible link.