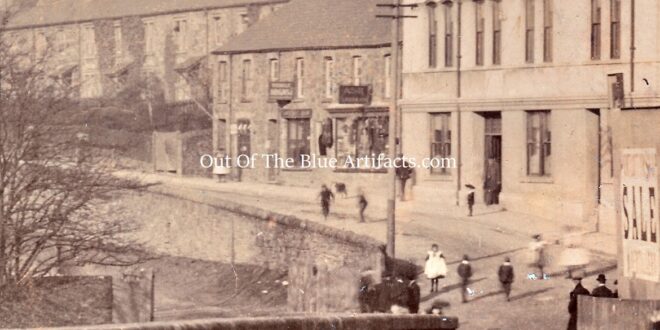 Oak Street Cottages – Abertillery.
The main image (featured above) taken sometime between 1905 and 1920 shows the Station Hotel, rebuilt in 1902 by Mr Noel Bagley, contractor of Oak Street, Abertillery and the 3 attached cottages which at the time this image was taken belonged to Mr D. W. Morgan, the South Wales Argus Offices of Newport and Messrs S. M. Ash, details of which can be seen below.

Following is a Link to – The Story of the Station Hotel

Mr S. M. Ash, Saddler and Harnessmaker.
Resident at 5 Oak Street were Messrs Sydney Mortimore Ash, Harnessmaker and Saddler, born 1872 at Newbridge, Monmouthshire. Mr Ash lived at the premises with his wife Elizabeth and children. In June 1910 Mr Ash opened another saddlery shop at the Arcade Abertillery and operated from both premises. In September 1920 Messrs Ash & Son vacated their 5 Oak Street shop, moved their business to the shop at the Arcade and extended the Arcade shop into High Street Abertillery. Shortly afterwards the old Oak Street premises were taken over as a cafe.

In 1920 the Station Cafe opened in the ex Ash Saddlers premises at 5 Oak Street. The proprietors were Mr & Mrs William Llewellyn Newell. They previously had a cafe at the top of Church Street but it was practically destroyed by water damage at the time of the fire at the Roath Furnishing Company Shop in 1919. When Messrs Ash vacated their premises, Messrs Newell moved to Oak Street and set up the Station Cafe in their old shop. The Roath Furnishing Company moved into Rogers Buildings Somerset Street.

The South Wales Argus Office.
Operating from and resident at 6 Oak Street, was the Argus Office and home of Mr William Ellis Jordan, a newspaper reporter for the South Wales Argus, based in Newport. Mr Jordan born in 1873 at Abertillery lived at the premises with his wife Laura Jordan nee Smith born 1881 at Birmingham, England and their daughter Miss Nora Jordan born at Abercarn.

In 1921 Mr G. E. Dibdin was the resident manager of the South Wales Argus Office at Abertillery and by the mid to late 1920’s the office at Oak Street was closed and all operations had moved to Church Street, Abertillery.

Mr David William Morgan, Hairdressers.
At 7 Oak Street was the Hairdressers Shop of Mr David William Morgan. Mr Morgan born in 1884 at Abergavenny lived at the premises with his wife Eleanor Morgan nee Bundred, born 1885 at the Garn Vach, Nantyglo, sister of Mr Tom Bundred the conductor of the Abertillery Orpheus Glee Society from 1908. In the 1930’s David Morgan set up a store in the Trinity Buildings at Church Street, Abertillery under the name Messrs Bundred Morgan. 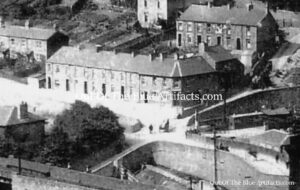 In 1902 the block was reduced to just 3 cottages when the new Station Hotel was built and enlarged. Later the street was renumbered during the various renumbering schemes by the council, which occurred as more properties were erected in the town. 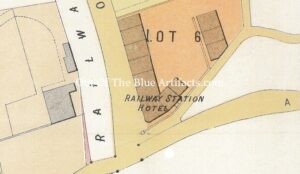 In the mid 1850’s when the British School was being planned, Messrs J. & C. Bailey Iron Masters of Nantyglo gave their land for the school to be constructed, Mr Edmund James also gifted land for the construction of the access roads etc. During the land sales of December 1879 the sales sheets stated the land was leased by Mrs Ann James for a period of 999 years, the cottages and the Station Hotel were being sold and it was stated that the rents were to be paid to Mrs Ann James of Abertillery.

At this time Edmund James’ son, Mr Edmund James Jnr and his wife Mrs Ann James of Caerphilly were landlord and landlady at the Bush Inn, Abertillery. This land must have been handed down to them and who had applied for a licence to sell alcohol at a premises on Blaenau Gwent Road, Abertillery at this time, this may have been a licence for the Station Hotel?

The cottages were amongst some of the older buildings in Abertillery and some of the earlier residents prior to the re-building of the Station Hotel were as follows – Taken from the 1891 census.

Earlier census records don’t show individual addresses, the layout is different and it is difficult to say who lived at a certain address in relation to the houses as seen today.

In the 1840’s Mr Edmund James lived at Clyn Mawr, Blaenau Gwent, (Clyn Mawr was the large area of land from the Rose Heyworth Housing Estate to Portland Street, from the Cock n Chick School to the railway lines where the Intermediate School was built) The Clyn Mawr Hotel was built at its centre and named after the area.

Mr Alexander James.
Mr Edmund James’ youngest son Mr Alexander James, born about 1848 became landowner, timber merchant and owner of stone quarry’s in Abertillery. Mr James’ timber business was later sold to Mr Arthur Tilney who developed it into the Abertillery Steam Saw Mills, situated close to the Railway Inn, said to have been the largest timber business in the county and perhaps the largest in South Wales. Mr James lived at Clyn Mawr Ganol, (middle farm) opposite the Blaenau Gwent Baptist Church with his wife Eliza and their family Master Edmund born 1880 and Miss Edith Maria Ann James born 1881. Mr Alexander James passed away in January 1900 and the Clyn Mawr Ganol was later used as a private school in the early 1900’s by Miss Haylings. The building was demolished to build the Grosvenor Home nursing complex in the 1980’s, later renamed the Penybont Nursing Home.