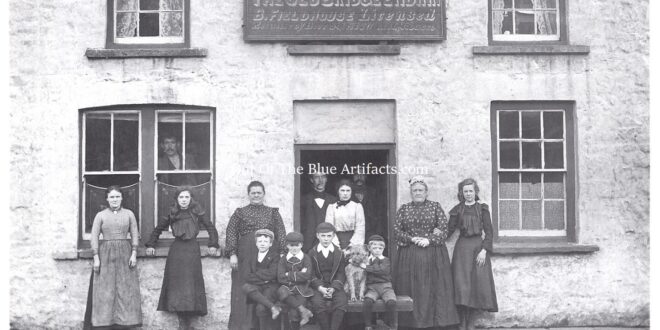 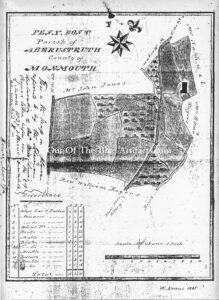 The Old Bridgend Inn – Penybont.
In the 1830’s the area of Penybont, Cwmtillery (as seen on the 1835 map left) was owned by various landowners such as Mr William Morgan, Mr John James, Mr Thomas Brown Esq with Messrs Joseph and Crawshay Bailey and later Messrs Arthur K. and Percy K. Stothert of Bath who’s family owned the land on the eastern side.

At the centre of the area was Penybont Farm and a small stone bridge over the Tylery River of which the area takes its name. The farm was taken over and incorporated into the Penybont Tillery Colliery by the colliery owners Messrs T. P. & D. Price at the start of sinking in 1848 and can be seen on old images it later became part of the colliery’s out buildings. The Penybont Farm and the stone bridge is long buried beneath the landfill used to transform the valley in the early 1970’s and is now directly below Henley’s Bus Depot.

The South Wales Colliery Company.
The Old Bridgend Inn was originally owned by the South Wales Colliery Company. This company was set up in 1864 to purchase the Cwmtillery Colliery from Mr John Russell Esq of Risca. The Cwmtillery Colliery, originally known as Tyr Nicholas Colliery was began in 1840 and sunk in 1842 by Mr Thomas Brown of the Blaina Iron Works. Mr Brown then sold the colliery to Mr Russell in 1847 and Mr Russell expanded it and made it one of the most productive and important collieries in South Wales and also secured contracts from Her Majesty’s Steam Ships in the 1860’s. A while later Mr Russell put the colliery up for sale at £66,000, Mr Thomas Brown desperately wanted the colliery back and asked Mr Crawshay Bailey of Nantyglo Iron Works to form a new company to acquire it. The South Wales Colliery Company was formed and with the help of other prominent gentlemen and a vast number of shareholders the sale went ahead and the Cwmtillery Colliery was purchased by the new company for an undisclosed amount. 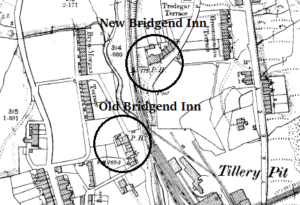 The Bridgend Inns.
The New and Old Bridgend Inn’s were completely different buildings opposite side of the valley to each other (as seen on the map right). Their names have nothing to do with the iron bridge that once spanned the valley between the both pubs. The bridge was only put in place in 1915, prior to its construction the railway was crossed at that point by a level-crossing which ran diagonally between the two Bridgend Inns. Prior to the Foundry Bridge being built, the people from Blaenau Gwent wanting to travel by foot or brake to the town centre had to cross the valley at this point, or a level-crossing lower down which was completely inaccessible to horse-drawn vehicles, though as the rail traffic in the Cwmtillery valley grew the level-crossing became dangerous to use and a bridge at Penybont was proposed and later constructed in 1915 as stated.

Mr and Mrs William and Ruth Davies.
In 1870 Mr William Davies born in 1834 at Mynyddislwyn and his wife Mrs Ruth Davies nee Lloyd born in 1841 at Llanhilleth, Monmouthshire were landlord and landlady at the Old Bridgend Inn, Penybont, at this time it was known on documents as the Bridgend Inn (lower).

In 1873 Mr William Davies sadly passed away at 40 years of age and in 1875 his widow Ruth Davies married Mr John Cobbett.

In the late 1880’s Mr and Mrs Cobbett left the Bridgend Inn and it was taken over by Mr and Mrs Fieldhouse.

The New Public House.
In August 1901 Mr Benjamin Fieldhouse applied for a removal of his license and to apply for a new one at a public house which was to be erected on Alma Street on land at the bottom of Wallace’s Lane, close to the lane leading to Bryn Morgan Terrace. The proposed new inn would have cost £2,500 with Mr F. R. Bates of Newport as architect. The opposition was from the Mount Pleasant Inn on Alma Street, the Temperance Society and Messrs Webb’s on behalf of Mrs Mary Wallace and other residents who lived close by. The bench refused the application without hearing any evidence even though Mr Fieldhouse had support from Mr Joseph Wilcox and Mr J. T. Williams the manager of the Cwmtillery Collieries.

In 1911 the census shows Mr Benjamin and Mary Jane Fieldhouse who had previously left the Old Penybont Inn and was living at Victoria House, Cwmtillery. 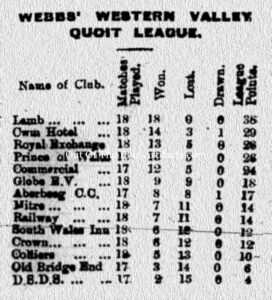 The Webb’s Table Quoits League.
In March 1921 the Old Bridgend Inn, Penybont featured in the Webb’s Western Valley’s Table Quoits League. The teams in the league (as seen right) were as follows – The Lamb, The Cwm Hotel, The Royal Exchange, The Prince of Wales, The Commercial, The Globe Ebbw Vale, The Aberbeeg Cons Club, The Mitre, The Railway, The South Wales Inn, The Crown Inn, The Colliers, The Old Bridgend Inn and the D.S.D.S. Club.

The Death of Mrs Fieldhouse.
In April 1925 Mrs Mary Jane Fieldhouse the ex-landlady of the Old Bridgend Inn passed away at her residence at Victoria House, Cwmtillery.

The Bedwellty Licensing Committee Closure Recommendations.
In February 1931 the Annual Licensing Committee with Dr Rocyn Jones presiding compiled a list of licensed houses in the district which were considered unfit for habitation and of which their licenses would not be renewed. These premises were closed down as appeals were heard and taken into consideration. If any public house affected by the closure was found to have grounds for appeal and the committee found that their premises were wrongfully closed and their licenses could be renewed they would be compensated for their losses during such time. In the case of the Old Bridgend Inn their appeal did not succeed and along with The Globe, Blaina and the Twin Inn, Coedcae, Nantyglo remained closed. 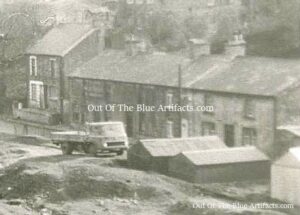 The Later Years.
The Old Bridgend Inn (as seen in the image far right) with the Britannia Inn (as seen behind the lorry) along with the roads, railway lines and Bryn Morgan Terrace etc was cleared in the late 1960’s early 1970’s and the valley filled in during the Land Reclamation Scheme of 1974, which at the time was the largest of its kind in Europe. The valley was filled in from the Cwmtillery Colliery down to the Foundry Bridge area, covering two collieries, a washery and by-product works and a series of railway lines and sidings etc. The top of the valley was used for industrial units and other small factories and later the Abertillery Comprehensive School was constructed upon its southern section.