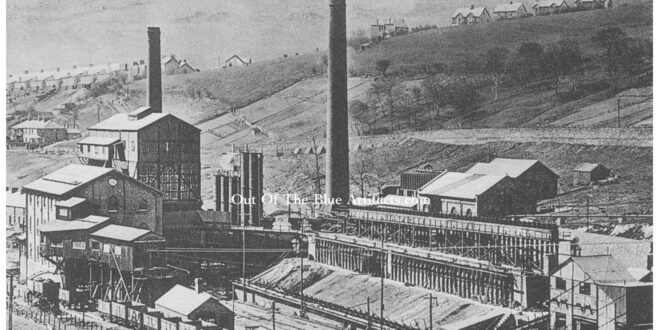 Penybont Washery Riot – Monday 1st July 1912.
Towards the end of June 1912, a man employed by the J. Lancaster Company at the Penybont Coal Washery, Cwmtillery was laid-off from his employment, the remaining workers being displeased at this dismissal had put up union notices of “show cards” in connection with the Miners Federation, this action by the workers enraged the manager who then removed the notices, this in turn angered the men who then walked out and forced the coal washery to become idle.

On the Friday 28th June 1912, a crowd of 400 men marched to the Cwmtillery Colliery with a deputation of officials which were accompanied by the local police and asked the workmen, fitters and other craftsmen to cease work in sympathy with the men at the washery. On Saturday the 29th June the men came out and pickets were stationed at the colliery.

The Lancaster Company became involved and after talks made a statement that they promised to reinstate the sacked gentleman on an equal pay rate, though in a different section of the works. The company made it clear that they also retained the right to remove the notices that the union had put up. This statement wasn’t acceptable to the workers and further talks with the union were arranged.

Mr Emile Wautier the Manager.
The coal washery manager, whom the men’s resentment were directed at was Mr Emile Wautier a German by descent. He had refused to reinstate the man under the workers conditions. The crowd gathered and Superintendent Lewis and his policemen tried to persuade the people to go home peacefully but all persuasions were in vain. The idea that something was going to happen drew large numbers of people to the area including women and children.

The Gathering.
Late in the evening the crowd, then numbering between 2,000 – 3,000 started venting their anger towards Mr Wautier, calling for “The German to leave the valley” also to “Blow him up” one man was heard to say he “Had dynamite and would ignite it under Mr Wautier’s house”, the crowd soon began to get violent and started throwing stones at the managers house, smashing windows and causing other damage.

Superintendent Lewis communicated with Chief Constable Mr Victor Bosanquet and arrangements were made for police reinforcements to be sent to Cwmtillery from other parts of the county including Ebbw Vale, Tredegar, Abergavenny, Blaenavon and Newport. These police reinforcements arrived by many motor cars between 11.30pm and midnight.

This arrival further angered the men who at this time positioned themselves up on the mountainside and bombarded the convoys of reinforcements with rocks and stones. Chief Constable Bosanquet arrived on the scene and oversaw the police’s response to the situation, he later gave the order for the police to “baton charge” the crowd, this order had immediate effect and the crowd dispersed. The baton charge was performed indiscriminately and many innocent bystanders were beaten though it was seen that the police had no other option.

The biggest part of the crowd went home, though the hardliners withdrew to Mynydd James where they were joined by men from Blaina who had walked over the mountain to add their support, they moved down into the valley and caused more damage. Bystanders told of the many head, body and limb injuries were sustained by the men and women in the crowd and that it had resembled a battlefield. After two hours the police had disrupted the riots and withdrew to the coal washery to regroup.

A Police Chauffeur’s Account.
Mr Frederick George Page, the police chauffeur who drove the Newport police constables to Cwmtillery under the direction of Inspector Barry gave this account of the night –

“When we arrived at Cwmtillery we were met by a storm of bricks and stones. The rioters had congregated on the banks overlooking the road and their booing and hissing was apparent they were in a very angry mood. It was impossible to move the car through the large crowd and the bricks began raining down again, police had tried to clear the road for the convoy of cars to get through.

We had to take out the windows to stop them from being smashed and causing cuts and further injuries though I was hit in the hand by a large stone as I was steering the car”.
“I noticed that there were a large number of women in the crowd and they were shouting and urging the men to turn the cars over. Inspector Barry was struck in the head with a stone causing him to jump from the car and shouting out “come on men” the Police drew their staffs and charged at the infuriated mob.

I managed to get my car to a pull-in and met other drivers, I saw Mr Donaldson another chauffeur of Tredegar who had a nasty gash on his head which was bleeding profusely, he had been struck by a brick, we went to a nearby house and asked for help but was angrily turned away by the resident. We later saw some friendly men who offered us a cup of tea, we then left the area at about 2.30am with our cars empty as the police stayed to clear out the area”.

On the Tuesday 2nd July 1912 there was a fear that there would be a repeat of the previous nights disturbance as once again there was a crowd of over a thousand people between the Mount Pleasant Inn and Gwern Berthi House along Gwern Berthi Road but the police were in readiness and the night remained quiet. After this the valley fell quiet and the feeling of anger subsided, many men, agitators on the night were arrested.

Court Case at the Abertillery Police Courts.
The case against the rioters was heard in the Abertillery Police Courts on Monday 9th and Wednesday 11th of September. The magistrates attending the case were – Mr E. Jones Williams, presiding; Mr J. Tarrant and Mr L. Hughes. Mr H. S. Lyne of Newport prosecuted on behalf of the police. Mr Lincoln Reed was for the defence. The court were told – In the aftermath of the riot the police arrested fifteen men, six men were charged with public disorder and eight with more serious charges such as assault, handling explosives, riotous behaviour and damage to property.

Monmouth Assizes October 30th and November 1st 1912.
The men who had appeared at the assizes at the Monmouthshire Autumn Assizes on Thursday 31st October 1912 were – Mr George Price; Mr Samuel Porter; Mr George Hooper; Mr Edgar Evans; Mr Albert Dando; Mr John O’Brien; Mr Albert Webber and Mr James Giles. The Hon Mr Justice Edward Ridley (Knight) presiding, Mr St John Micklethwaite (Instructed by Mr H. S. Lyne, solicitor of Newport) would prosecuted on behalf of the Crown while the prisoners were defended by Mr Lincoln Reed and Mr G. Ram (Both instructed by Mr T. S. Edwards solicitor, Newport) the men were urged to plead guilty of common assault and rioting, though the police had stated there were no injuries to the police.

On Friday 1st November 1912, in a show of clemency the Hon Mr Justice Ridley bound the men over for the time of six months with a charge of £10.00. The Judge said he hoped that the public would not think because of that leniency that there was any intention to deal lightly with such rioting.

The Enquiry.
On Monday 30th December 1912 an enquiry held at the Newport County Council Offices by the Standing Joint Committee was held to consider if the police had been unduly harsh in the measures they took on that memorable night. The hearing was held in the No1 Committee Room. His Honour Judge Hill-Kelly was in the chair and the other members present were – Sir Henry Mather-Jackson; Alderman S. N. Jones; Alderman T. Parry; Councillor Alfred Onions; Mr Stafford Gustard (Clerk); Alderman Thomas Richards MP; Mr Lincoln Reed; Mr T. S. Edwards; Mr George Barker (Miners Agent for Abertillery) representing the men; Mr Horace Lyne with Mr Victor Bosanquet for the Police;

The enquiry heard the story of the disturbance which had arose out of a labour dispute, the major portion of men employed by Messrs Lancaster Company being out on strike, also the meeting at the New Bridgend Inn on the Monday 1st July 1912. After the meeting at the inn a deputation followed by over 400 men went to meet the manager of the coal washery and to make sure no employee of the firm was still engaged at the premises, they were accompanied by Sergeant Ridge, who, at that time was in the employ of the Lancaster Company. Sergeant Ridge gave his permission to let a small deputation of men go through the works.

The men then vented their anger towards the manager Mr Wautier, they laid siege to his house Gwern Berthi and after a crowd of between 3,000 – 4,000 had gathered it was clear that the Abertillery Police Force could not have stopped or calmed the riot and had decided to call for reinforcements from the county. After the reinforcements arrived the order to baton charge was given but it was unclear as to who gave that order, either the Chief Constable or Superintendent Lewis?

Mr Henry Mather-Jackson was told by Mr Reed that the damage done on the night had resulted in a total bill of £7. 16s. od. and that if the rioting had been that bad the damage would have been considerably more! The company had intimated that they wanted no more bad feeling in the community and to leave bygones be bygones.

All the witnesses gave damning evidence against the police saying that they had indiscriminately hit anyone who was in the area, men women and children, one officer had even hit a woman who had a baby in her arms, as she put the baby on the ground to protect herself the officer kicked her. Evidence was also heard on the behaviour and language of the officers, all witnesses saying the police were behaving like animals. Mr George Barker the miners agent stated he had personally inspected the washery house on the Tuesday morning and had not seen any evidence that it had been badly damaged, he said he could only see slight damage and just two windows smashed.

The Independent Witnesses.
Contradicting evidence came from the following independent witnesses – Mr E. C. Grylls (Journalist of Abertillery) and Mr William E. Jordan (Journalist of Abertillery); They both reported and stated that the crowd was unresponsive to the many requests to disperse and that the police did feel threatened to the point that the baton charge was the only course of action. This evidence from the journalists was backed up by Mr T. J. Williams (Colliery Manager); Mr Emile Wautier (Washery Manager):

The committee was told to reconvene on Wednesday 15th January to receive the official report.

The Standing Joint Committee Investigation.
On Wednesday 15th January 1913 the Standing Joint Committee set up to investigate the serious charges against the Monmouthshire County Police in their actions at Cwmtillery on July 1st 1912 gave their findings. They stated there were no foundations for the allegations put towards them. The Monmouthshire County Police were totally exonerated. We the undersigned – His Honour Judge Hill-Kelly; Sir Henry Mather-Jackson; Alderman S. N. Jones of (Abertillery); Alderman T. Parry; Councillor Alfred Onions: