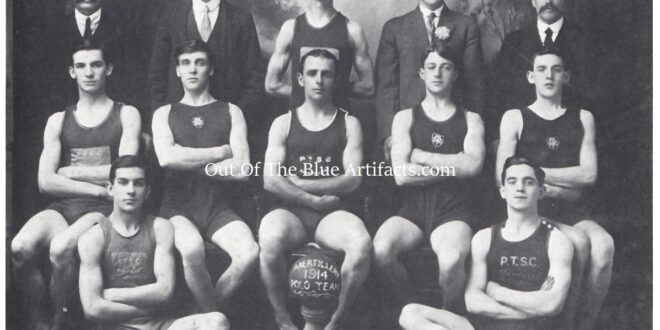 The Club’s Colours.
Various classes were arranged at the Powell’s Tillery Institute, for the juniors, ladies and gentlemen. The gentlemen who desired to become members had to pay 1 shilling or work at the Powell’s Tillery Collieries. It was stated that the members were to arrange to purchase blue costumes as this colour was considered club colours.

The Reopening of the Powell’s Tillery Institute Baths.
In April 1911 the Powells Tillery Swimming Baths reopened for the season. It was stated that the baths were to be reserved at certain times for the newly formed swimming club. The times for the various swimming classes were the same as the previous year though the prices for membership were now as follows – Senior Members 3s. per season. Junior Members 1s. 6d. per season and School Children having to pay 1s. Mr C. W. Spalding was still the manager. 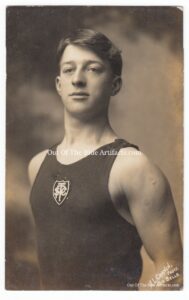 Mr Jim Stone.
One of the Powell’s Tillery Water Polo team members was Mr Jim Stone (as seen left). Mr Stone was featured on many of the teams photographs throughout the years and was a valuable and loyal team member. (Photograph by Cranch of Abertillery). 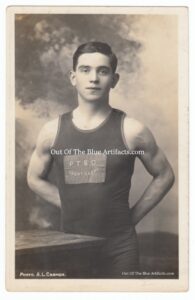 Mr A. V. Frowen.
Another member of the Powell’s Tillery Water Polo team was Mr A. V. Frowen (as seen right). Mr Frowen was featured on many of the teams photographs throughout the years and was a valuable and loyal team member. Mr Vernon Frowen was born in 1896 at Abertillery was later a colliery worker and in 1911 was listed in the census as living at 14 Ashfield Road, Abertillery. His father Mr William Frowen was born in 1868 at Abergavenny. His grandmother Mrs Emma Saysell was living at the same address, born in 1840 at Coleford Gloucester. Sisters Lily Frowen born 1894 and Ethel Frowen born 1902. (Photograph by Cranch of Abertillery).

The Welsh League Water Polo.
In March 1921 at the annual meeting of the Abertillery Swimming Club held at the Powell’s Tillery Institute the following gentlemen were present – Mr A. V. Frowen (Chairman); Mr C. W. Dicks the both officers also being delegates to the W.A.S.A. Mr Ellis Rowlands (Secretary); Mr Glyn Rowlands (Assistant Secretary); Mr C. W. Dicks was elected captain and Mr A. V. Frowen was elected vice-captain. At this meeting it was stated that the junior water polo championships were to come to Abertillery in the coming season and it was reported that 1921-1922 was the first year for the Welsh League Water Polo. The Powell’s Tillery Team in this season were – Mr S. Lintern; Mr P. Mason; Mr Stan Williams; Mr C. W. Dicks; Mr Reg Hanney; Mr A. Padfield; Mr Jim Stone; Mr L. G. Thomas; Mr Alb Williams and Mr A. V. Frowen:

The Council Outdoor Swimming Pool and the Institute Baths.
The Powell’s Tillery Water Polo Team used the Powell’s Tillery Institute Baths as their home and headquarters though if any games were played off season or for practice the council allowed the team to use the Abertillery Park Baths. This concession came in handy during the coming 1921 season as the institute swimming baths was closed for refurbishment and the polo team had to play all their home games in the park baths.

The Park Baths Water Quality.
In July 1921 Abertillery played Cardiff at the Abertillery Park Baths, one of the Cardiff players left the water and was taken ill and a few others left with cramps, the water quality was called into question and a sample was taken for analysis. I was later found pure though it was said that there was room for improvement.

A Game Played by Moonlight.
On Thursday 18th August 1921 a game of water polo was played by moonlight. The Powell’s Tillery Water Polo Team entertained Cardiff Catholic S.C. On their way to Abertillery the Cardiff team’s bus broke down and they arrived at the swimming baths at the park at 8.45pm, rather than forfeit the points Cardiff opted to play in the dark. It was reported that they were illuminated by brief glimpses of moonlight.

The Successful 1921 Season.
At the end of the 1921 season playing at the Abertillery Park Baths, the Powell’s Tillery Water Polo Club had played 17 matches, won 12, lost 2 and drew 3. The team finished second in the league runners up to Cardiff Polytechnic. The Powell’s Tillery Water Polo Team goal-scorers and their individual records were as follows – Mr Reg Hanney 19; Mr V. Frowen 17; Mr R. G. Thomas 16; Mr Stan Williams 11; Mr A Padfield 9; Mr P. N. Mason 5; Mr Jim Stone 4; Mr C. W. Dicks 3 and Mr A. Williams 2: The club had eleven players who played throughout the season, they finished on 27 points with 86 goals for and 45 against. 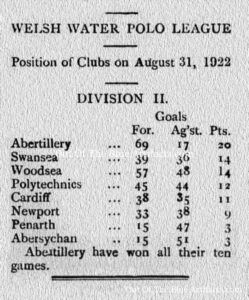 The Water Polo 1922 Winning Season.
In June 1922 the Powell’s Tillery Water Polo Team began their season in the second division of the Welsh Water Polo League. The table (as seen left) shows the league positions as in the August 1922. In the following September they had finished the league unbeaten. They were top of the division without a single defeat with 97 goals for and only 29 against. The 1922 unbeaten team members were – Mr P. N. Mason; Mr H. Lintern; Mr W. T. Lintern; Mr Jim Stone; Mr Stan Williams; Mr C. W. Dicks; Mr A. Padfield; Mr Reg Hanney and Mr R. G. (Bert) Thomas:

The 1922 winning season saw the Powell’s Tillery Water Polo Team create a record by winning every match they had played in during the season, a feat unaccomplished by any senior or junior Welsh league team, later another record was achieved when Weston A Team asked the Powell’s Tillery team for a game of water polo, it was the first time an invitation had been received from an English team. At the end of the season the statistics and goal scorers were as follows – Mr W. T. Lintern 10; Mr Jim Stone 1; Mr Stan Williams 5; Mr C. W. Dicks 1; Mr A. Padfield 38; Mr Reg Hanney 18 and Mr R. G. (Bert) Thomas 24: Mr Bert Thomas was chosen to represent Wales against Scotland in this year though sadly wasn’t chosen to play.

The 1923 Season Officers of the Powell’s Tillery Swimming Club.
It was proposed to put in two water polo teams into the Welsh League during this coming season. One in the junior division and one in the senior division. The officers for the ensuing season were elected as – Mr W. H. Gane (Chairman); Mr T. Rowlands (Secretary); Mr G. Penny (Assistant Secretary); Mr Bert Thomas (Captain) and Mr Reg Hanney (Vice-Captain): Mr P. N. Mason was appointed delegate to the Welsh Swimming Association.

Master C. Hill.
In August 1924 it was reported that Master C. Hill aged just 15 was playing for the Powell’s Tillery Water Polo Team in the First Division, it was his first game in the league and was chosen to play against the Cardiff City Police.

In the following 1925 season Mr C. Hill had become a regular member of the Powell’s Tillery Water Polo Team and in this year Mr H. Light had become a member as goal keeper with Mr E. Hughes also being in the team.

The 1930 Season.
In February 1930 a dinner and dance was held at the Station Hotel, Abertillery for the members of the Powell’s Tillery Swimming Club. It was stated that 1929 had been a very successful year in connection with the water polo team and the president of the W.A.S.A. Mr W. T. Lintern awarded the shield and medals to the team that consisted of the following members – Mr A. Padfield (Captain); Mr S. Williams (Vice-Captain); Mr A. Carter; Mr Reg Hanney; Mr T. Samuels; Mr J. Jones and Mr W. Morris: Messrs R. Jones; C. Crook; R. Hoskins and J. Lewis were winners of the 3rd Division Squadron Championships and were awarded medals.

The Winter Water Polo League.
In October 1932 at a meeting of the Welsh Water Polo League held at Cardiff it was suggested that a winter water polo league be set up, it was stated that Abertillery would be willing to join but the Powell’s Tillery Baths were closed throughout the winter season.

The later years are to follow in another edition.

Notes of Interest – Mr W. T. Lintern.
In July 1920 the Olympic Swimming Trials of Great Britain were held at Southport. The judges were – Mr Andrew Inglis of Scotland; Mr W. T. Lintern of Wales and Mr G. H. Leitch of Ireland: Mr W. T. Lintern of Wales had played polo as centre forward for Abertillery and had been Hon Secretary of the Powell’s Tillery Institute Swimming Club. Mr Lintern had since entered Cardiff University, he had played for Penarth as captain and also played as captain for the Cardiff University Water Polo Team and was the Assistant Secretary of the Welsh Amateur Swimming Association and was on the Great Britain Olympic Games Selection Committee.

Distinction for Local Swimmers.
In November 1923 two local swimmers Miss Gwen Huntley and Mr Bert Thomas were chosen as two of the four Welsh representatives to take part in coaching tests in connection with the selection of a British Team to compete in the Olympic Games to be held in Paris in 1924. It was reported that between 50 and 60 competitors took part in the trials held at Cardiff Corporation Baths and Miss Huntley was the only lady selected, she had secured preference over two others, Miss Phyllis Scott of Roath Park and Miss Edna Matthews of Penarth. Mr Bert Thomas was the Powell’s Tillery Water Polo player.