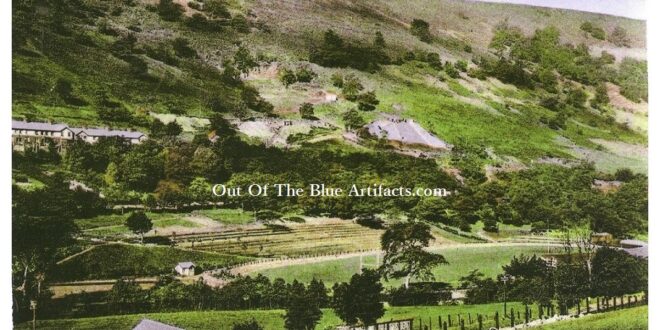 Rhiw Colbren Coal Level.
This colliery consited of series of coal levels numbered 1 to 4, each driven into and under the Arael Mountain from Old Blaina Road.

Mr Thomas F. Salt.
Owned and opened in the late 1890’s by Mr Thomas Salt of Abertillery, prior to opening the Rhiw Colbren levels Mr Salt was the manager of the Arael and Llandavel Levels under the ownership of Messrs James and Emmanuel from the late 1880’s to 1898.

The Gas Works Contract.
In 1898 Mr Salt of the Rhiw Colbren Levels won the tender to supply coal to the Abertillery Gas Works at at a price of 8s. 4d. per ton.

In all early documentation and adverts from 1890’s to 1905 these levels were known as Rhiw Colborn Levels.

Manpower Figures.
In 1908 there were twenty-five men employed below ground and six on the surface.

Messrs Badman Bros.
In 1918 the Mr Salt sold the Rhiw Colbren Coal Levels and his home Gwentland House, Oak Street, Abertillery. They were both purchased by Messrs Badman Bros of Tredegar, the brothers used Gwentland House as their place of operations. After the purchase the new owners mothballed the levels but kept them well maintained.

In 1922 the Badman Brothers still hadn’t mined any coal from the levels and they were used only as a second way out for Budd and Co, Aberbeeg Colliery.

In the November 1922 the Badman Brothers did restart the levels and placed adverts for their coal in all local newspapers.

In 1923 the workforce was listed as being twenty-six below and seven above ground.

In 1938 the workforce had expanded to fifty-five below ground and thirteen above ground.

In 1945 the Rhiw Colbren was still being worked by the Blaendare Company though the workforce had decreased a little to thirty-three below ground and fourteen above ground.

The Featured Image.
The above photograph (in the main featured image) shows the Rhiw Colbren Level entrances of number 1 and number 2. Above the levels is Reservoir House, of the Abertillery Reservoir number 3. To the left are the houses of Cyril Place. The Reservoirs numbered 2 and 3 were situated on the Arael Mountain, number 1 at Heol-Gerrig had previously been built to supply Abertillery with water. All three reservoirs were taken out of use when the Cwmtillery Reservoir was constructed.

Cyril Place.
In 1914 Mr Thomas F. Salt applied to build these twelve houses in two terraces. After their construction the following year he named them Cyril Place in honour of his son Mr Cyril Salt who had been sadly killed in 1915 in France during the Great War. Mr Cyril Salt had served in the Monmouthshire Regiment.

The Memorial.
On the front of one of the houses Mr T. F. Salt incorporated a stone relief carving of his sons regimental emblem, a Welsh Dragon.