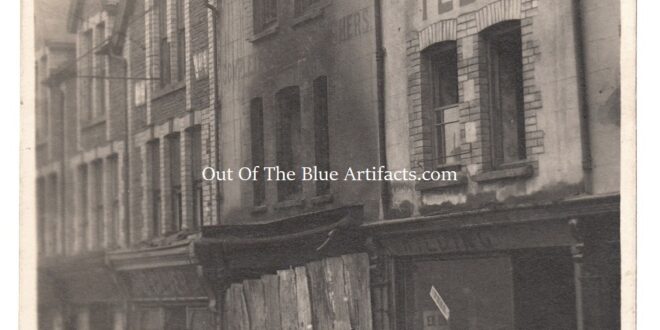 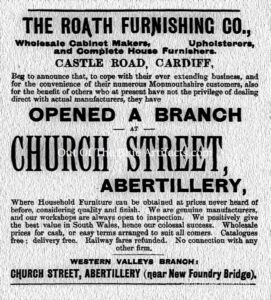 Roath Furnishing Company – Church Street Abertillery.
The Roath Furnishing Company based in Cardiff opened a branch of the store at Church Street, Abertillery in August 1903. The company had a head office at 42 Castle Road, Roath, Cardiff and a store at Vere Street, Cardiff. A few years later branches were also opened at High Street, Bargoed and Taff Street, Pontypridd.

The Manager.
The manager of the Abertillery store was Mr John H. Pilley born in 1883 at Cheltenham, Gloucestershire and his wife Mrs Annie Maud Pilley nee Hoskins of Crumlin, Monmouthshire. They were married in 1907 and both lived at 4 Ashfield Road, Abertillery, also living at the address was Mr Charles Durrant Pilley, a brother who worked as a canvasser for the Roath Furnishing Company.

The Company Prize.
On Monday 2nd May 1904 a competition began at the Roath Furnishers shop, Church Street, Abertillery. On the said day at 6.00pm Mr E. Jones Williams Esq, the ex-chairman of the Abertillery District Council wound and started a 14-day regulator clock, the competition was to who can correctly guess the time or closest to the time at which the clock will stop. The winner received a marble clock, the runner up received the actual regulator clock used in the competition. The clock stopped on the 18th May at 7.47am. The first prize went to W. H. Jones, Charlton Terrace, Cwmtillery and the second prize winner was Alice Morris of 1 Duffryn Row, Cwmtillery.

On Monday 18th July 1904 owing to the success of the last clock competition, another regulator clock was wound for the purpose of another competition. On the said day at 6.00pm Mr E. Jones Williams Esq, of the Bell Inn, Abertillery the ex-chairman of the Abertillery District Council wound and started a 14-day regulator clock which had been tested by Mr Ince, the jeweller at High Street, Abertillery. The clock was then sealed in the window for all to view. The prizes were the same as the last competition. The company issued a statement to the newspapers that if anyone can prove that it was not a genuine competition, Roath Furnishers would give £100 to local charities. There were no prize winners names published in the local paper. The company issued a list though stated they had placed it in the window of the store in Church Street, Abertillery.

The Fred Karno Troupe.
When the Fred Karno troupe appeared at the Pavilion Theatre, Abertillery in August 1908 with their celebrated performance of “Saturday to Monday”, the furniture for the show was kindly lent by Roath Furnishers, Church Street, Abertillery.

The Company Prize.
In December 1908 the Roath Furnishing Company, Abertillery began a new prize competition. In the window of their store in Church Street, Abertillery was a large cushion in which a certain number of pins representing the letters “R.F.C.”, the competition was who could correctly guess the number of pins contained in the cushion. The first prize was a marble clock, valued at £2. 10s. 0d. Second prize was a Chippendale palm stand, valued at £1. 1s. 0d. with ten consolation prizes of Worcester vases valued at 2s. 6d. each. There were no prize winners names published. The company issued a list though stated they had placed it in the window of the store in Church Street, Abertillery.

Other Branches.
Later, other branches of Roath Furnishings were opened, one at 51 Holton Road, Barry Dock, Cardiff and another at 89 Osborne Street, Tredegar.

The Disastrous Fire at the Store.
On Friday 6th June 1919 at about 7.30pm a fire broke out at the rear of the building in a corrugated iron showroom of Roaths Furnishers, Church Street, Abertillery which spread to the main building causing major devastation. The chain of events which occurred were seen as most unfortunate at the time. The Abertillery Fire Brigade under Lieutenant Rancombe were miles out of town on a practice run when the alarm was raised, by the time the brigade reached Abertillery the fire had taken hold and spread throughout the store owing to the vast stock of inflammable content in the building. The night, being still with no wind helped in containing the flames from spreading but the firemen were hampered owing to the lack of water, there had been a dry spell and there was a shortage of water owing to a drought.

The brigade set up one hose from a stand pipe 100 yards away and a steady flow was obtained, their priority was to stop the inferno from affecting the adjoining premises of Olivers Shoe Shop, Messrs Newell’s Restaurant and Tibberton’s Dental Practice on a second floor. A great deal of water was poured onto the premises each side of the fire, sadly all the stock of Roath Furnishers was totally destroyed. While attempting to remove a valuable piano from Newell’s Restaurant the brave helpers dropped the instrument down the stairs and that was also ruined. At its height the fire spread to the foundry of Mr Henry Ward Williams, though he had quickly located and extinguished the flames with help from some employees. Mr Sam Rogers shop near the bridge was saved, the stock was removed at an early stage, later the threat of the whole block being engulfed had soon diminished.

The Llanhilleth Fire Brigade under Leyshon Davies later appeared and rendered valuable assistance and the way in which the both brigades operated drew much praise and admiration from all of the spectators, they fought the flames for hours and the South Wales Gazette reporters wrote “There was no praise too high to bestow upon them”. They also wrote “While there was no lack of willing helpers who did their best to save the possessions of those affected by the fire it was disgusting to see the despicable conduct of the many looters, who in the misfortune of others could only see an advantage for themselves”. With the fire being watched by several thousand people the police under the command of Deputy Chief Constable H. Lewis were powerless in trying to help the brigade and to stop the many thieves.

Looters were seen further down the street at the rear of the India & China Tea Company, they had broken in and had taken stock while the inferno raged and this wasn’t noticed until Saturday morning. Mr T. H. Prichard while attending to his chemist premises and assessing the situation had to personally chase away people trying to gain entry into his shop. After all of the damage done to Messrs Newell’s Restaurant the cash register was broken into and £10 taken by looters and opportunists on the night. Along with destruction to Roath Furnishing Co with much of the stock being held for customers and newly weds etc it was stated that between £20,000 and £30,000 of damage and losses had occurred to both premises on the night.

The Temporary Offices.
After the fire, Roath Furnishings Company tried to operate as normal as possible and set up temporary offices in the Danish Butter Company buildings at Church Street, Abertillery.

The Abertillery Eisteddfod Chair.
In June 1922 the sixth annual Abertillery Eisteddfod in connection with the Powell’s Tillery and the Arrael Griffin Collieries Disablement Fund was held at Gelli Crug field. The chair, a large carved oak seat, with which the Chairing of the Bard by “Sarnicol” was used, was supplied by the Roath Furnishing Company, Abertillery.

The Post Office Premises.
The buildings damaged in the 1919 fire were beyond repair and both premises were left derelict. In June 1923 Mr W. H. Hiley sold to Her Majesty’s Office of Works the two said leasehold shops and premises in Church Street, the old buildings that were once occupied by the Roath Furnishing Company and Mr W. Newall. The vendor for whom Mr A. H. Dolman acted for was Mr A. Jackson, confectioner Church Street, Abertillery.

The two buildings were later demolished and Her Majesty’s Office of Works erected the new Abertillery General Post Office in their place. Messrs S. Rogers general shop next door was later demolished to make way for the construction of the roadway down to the back of the sorting office.

Messrs Newell later opened a cafe in the old premises of Messrs S. M. Ash, saddlers shop in Oak Street after they had moved to the back of the Arcade, Abertillery. Messrs Newell named their new premises the Station Cafe. 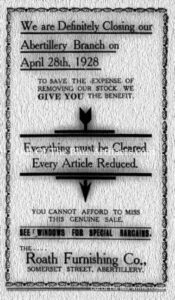 The Later Years.
In March 1928 the Roath Furnishing Company announced it was to close their both stores at Abertillery and were to transfer all their stock to 137 Commercial Street, Newport.