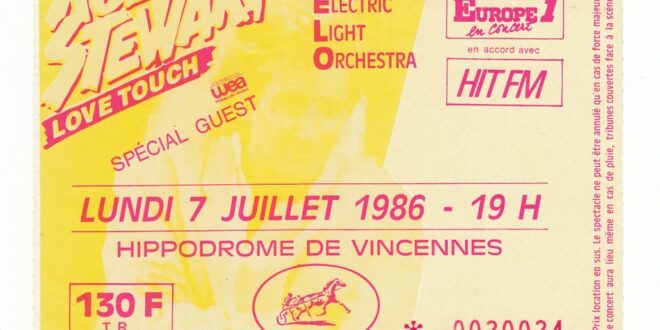 It is unsure whether this concert was rescheduled for the 9th of July or cancelled (More information required).

In March 1986 ELO appeared at the Heartbeat 86 Charity Show at Birmingham. The group intended to go on tour to promote their new album “Balance Of Power” and was booked to open for Rod Stewart in a series of concerts. The first was at Wembley Stadium on 5th July 1986 with Rod Stewart and his “Very Special Guests and Friends” concert.

There was a concert organised for the 7th July 1986 at the Hippodrome De Vincennes, Paris, France which was believed to have been rescheduled and later cancelled? Another on 12th July 1986 at Dortmund, Germany and one on 13th July at Stuttgart, Germany which both went ahead. The latter concert was the last as Jeff Lynne called it a day and stopped touring.