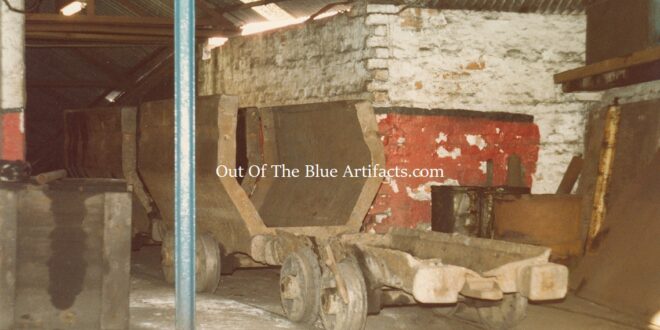 The creeper was used to take the loaded drams of supplies to the upper deck of the bank to load onto the cage.

The two different types of drams seen in the image are a flat-bed bogie for carrying machinery and the open ended dram with no end panels, these were used for transporting long objects, such as pipes, rails, conveyor belt structure etc. These open ended drams were used in conjunction with long shackles for wider gaps between the drams for the ease of movement going around corners and bends below ground.

The flat-bed bogie in the image has a sprag in its front wheel, these were used to keep the drams from rolling away. The sprags were also used by experienced journeymen and riders to control certain loose wheeled drams whilst being taken into the underground workings. Any loose wheel would move back and forth on its axle causing the dram to come off road and de-rail. By placing a sprag into that wheel it would lock the wheel at its extended position and stabilise it, stopping it from moving back and forth on its axle but the power of the engine still pulled the drams in to the back of the workings and the spragged wheel would just slide along the rail without causing any problems.