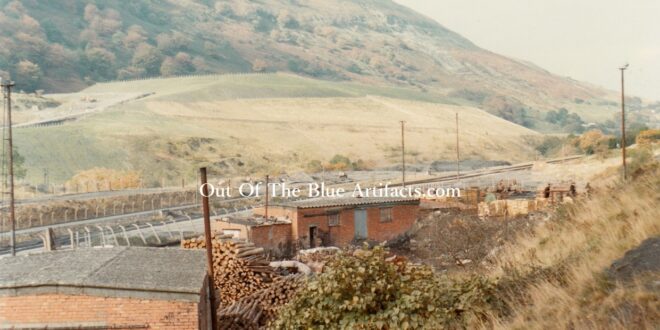 The Waste Tip in October 1985.
When the aerial rope-way ceased operating in about 1979, the waste from the colliery was taken to the tip by a few Volvo tipper trucks, they travelled from the coal preparation plant taking loads of waste to the tip throughout the day.

The image (taken by myself) shows the waste tip in October 1985 just a few months before the colliery officially closed. The Volvo trucks can be seen coming from the tip, the waste tip was also being landscaped and seeded at this time. In the foreground were the buildings of the saw mill (left) and the yard men’s cabin (right). Also the 4′ foot timbers and hardwood cog blocks stacked in the yard, ready to be taken underground to be used as lagging behind the support rings and roof supports.