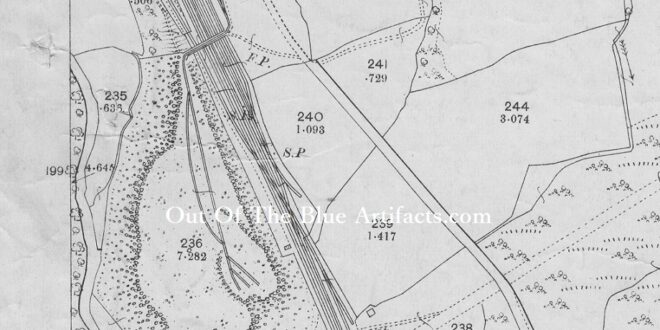 This is a brief history of the Rose Heyworth Colliery Aerial Ropeway and over the next few pages will be maps and images of its build up.

From the start of sinking at the Rose Heyworth Colliery in 1874, the waste was dumped on the grounds of the colliery. The waste was taken from the colliery over the railway via a small bridge and was then transported across a close area by the means of temporary tramways which were laid to distribute the waste over a comparatively small area between the colliery and river. This waste tip built up from the south to north via the tramway and over the years ended up with the peaked tip at the top end of the Abertillery park extension, opposite the Glo-Byllau Farm.

In the 1920’s the South Griffin Colliery just north of the Rose Heyworth Colliery sited at the base of the Arael Mountain behind the Tylers Arms, closed. It was shutdown but kept in a good state and in the 1930’s was used as a location to film scenes for the film “The Shape Of Things To Come”, by H. G. Wells. In the 1940’s-50’s the colliery was demolished and the grounds were taken over as a site to tip the waste from Rose Heyworth from the newly constructed Coal Preparation Plant, standards were placed up through the route and the flight was installed (as seen in the map with the flight route from the colliery outlined in blue).

The Cementation of Colliery Waste Tips.
In the early 1970’s the National Coal Board, in the aftermath of the Aberfan disaster of 1966, tried to make all tips, redundant or in use, stable, or to attempt to stabilise them to prevent another disaster through land sliding. The N.C.B. planned a programme to mix dry cement in with the waste so the tips would become solid and incapable of any movement, a cement hopper was built onto the waste chute of the flight building. Rose Heyworth Colliery had weekly deliveries from the Blue Star Cement Company for this purpose.

The Later Years.
In the late 1970’s the flight was shut down and the dumping of waste was done by a convoy of Volvo Tipper Trucks which ran back and forth the tip until the colliery ceased producing coal in late 1985.