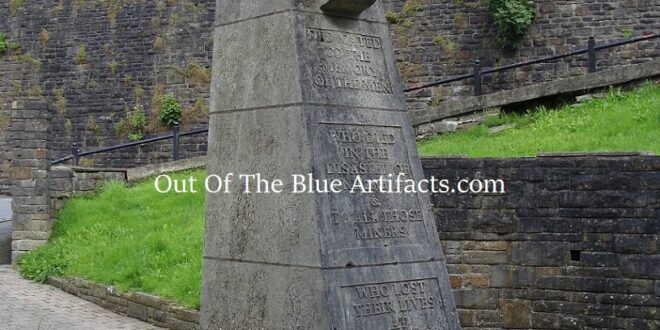 Six Bells Disaster June 1960.
On Tuesday 28th June 1960 at about 10.40am an explosion occurred in the No5 Pit W-District at the Six Bells Colliery, Abertillery, with forty-five men sadly losing their lives. 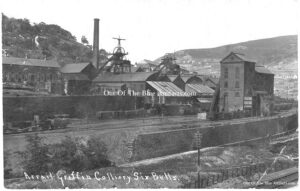 Details of the Colliery.
The Six Bells Colliery (as seen left) formerly known as the Arrael Griffin Colliery number 4 and number 5 was in the number 6 Area of the National Coal Board’s South Western Division, situated at Six Bells in the Western Valley of Monmouthshire. The Arrael Griffin Colliery was sunk in 1891 by Messrs J. Lancaster & Co. At the time of the disaster the Colliery was connected to the Vivian Colliery, half a mile away to the north. The connection to the Vivian Colliery was for downcast ventilation and man-riding purposes only.

The Arrael Griffin Colliery was re-named the Six Bells Colliery in the 1950’s.

There were 1,213 men employed below ground at the Six Bells Colliery and 239 men on the surface. The out-put was about 1,800 tons of saleable coal per day. The colliery had always been a safety lamp mine. There were 1,450 electric cap lamps, 85 flame lamps, for use by workmen as firedamp detectors, with 79 internal re-lighter type flame lamps for use by officials.

The Funerals.
On Saturday 2nd July 1960 the bodies of twenty-six of the victims were buried at the cemetery, Brynithel. Other burials were performed at Blaina and Brynmawr.

The Official Inquiry.
The official inquiry into the explosion at the Six Bells Colliery on the 28th June 1960 opened on the 19th September 1960 in number 2 court of the Civic Centre, Newport. The following Inquest into the disaster stated the most probable cause of the explosion was an accumulation of firedamp gas being ignited by a spark caused from the friction from a fall of quartzitic rock onto the face panzer canopy. This explosive flame was fed by coal-dust in the roadways in the district. Of the many possible causes of the fatal explosion at Six Bells Colliery debated in the lengthy inquiry, this was seen as the most plausible cause. 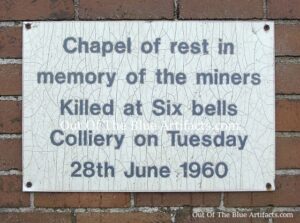 The Chapel of Rest at Brynithel and the Dedication.
After the Six Bells Colliery Disaster of June 1960 it seems the Chapel of Rest, adjacent to the mortuary at the cemetery was dedicated to the miners who were killed in the disaster, this dedicatory plaque (as seen right) is now on the outside wall of the mortuary.

Memorials.
It was 35 years before a memorial was first proposed and constructed. 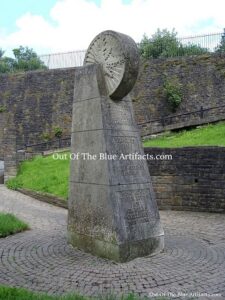 The First Memorial.
The first Six Bells Colliery Disaster Memorial (as seen left) was erected on ground at Chapel Road, Six Bells and unveiled in the last week of August 1995. The memorial was unveiled by the Mayor Mr Ron Rowlands and dedicated by his chaplain Mrs Vivienne Nicholls. The artist and architect was Mr Robert Kennedy of Cardiff. The memorial was made of Portland stone and stood twelve and a half feet high. It was sited in a memorial garden on land just off Chapel Road, below Bridge Street, Six Bells. The stone memorial, a tapered monument incorporating a pit wheel on the top with a miners lamp and etchings in the form of portraits of twenty-six local people was part of a £23,000 environment improvement scheme by the Blaenau Gwent Borough Council and Community Design for Gwent. 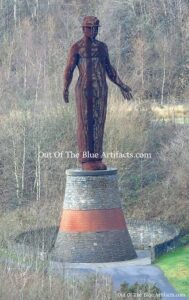 The Second Memorial.
In about 2007 a new larger memorial was planned, this new memorial was to be called the Guardian, a figure of a miner with his arms out-stretched by its side, standing on a stone plinth on which were placed the names of the victims of the disaster on plaques around the base and sited in the colliery grounds. It was to be made from Corten Steel and designed by the sculptor Mr Sebastien Boyesen. It was partly erected in time for the 50th anniversary of the disaster held on Monday 28th June 2010 and dedicated by the Arch-Bishop Mr Rowan Williams, which many people attended the memorial service at the site. The miners memorial statue (as seen right) was finally completed and now stands just south of the grounds of the colliery.

Points of Interest – Carved onto the plaque of the old memorial are the words “Dedicated to the memory of the men who died in the disaster of June 1960 and to all those miners who lost their lives at the Six Bells Colliery 1897-1988”. What I can’t believe is how the designer Mr Robert Kennedy only dedicated the memorial to those miners who sadly lost their lives between those dates, the colliery sinking began in 1891 and there were a few miners who were killed after this date and before 1897 but it seems they were sadly forgotten. Below is a list of the fatalities that occurred before 1897 –

On Thursday 14th February 1895 the inquest was held at the Reading Rooms, Cwmtillery into the circumstances of the accident that had occurred. The sinking gang had been in the bowk and lowered down the shaft, which at this time was 240 yards deep, the bowk collided with scaffolding that was in the shaft 40 or 50 yards from the bottom, the collision tipped the bowk and four of the men fell to their deaths.

Mr William Lusty was buried at Llanhilleth Churchyard and the remains of Mr John Lamb and John Day were interred at Blaina Churchyard.

The Second Sinking Accident.
In April 1895 another accident occurred in the shaft at Arrael Griffin Colliery Six Bells, Abertillery resulting in the death of a Chargeman.
Mr Eli Morgan aged 36 (Chargeman):

On Thursday 13th April 1895 the official inquest took place (no venue mentioned in the reports) into the circumstances of the accident that had occurred Mr Morgan was in charge of the shift putting in water pipes down the shaft, he was 40 yards from the surface when he fell to his death.

The Third Sinking Accident.
On Thursday 2nd May 1895 a serious accident occurred at the Arrael Griffin Colliery Six Bells, Abertillery. Two sinkers named Mr Herbert and Mr Kyle were seriously injured by a fall of the side in the shaft, It was reported Mr Jacob Kyle was slightly injured though Mr James Jacob Herbert was conveyed home where he succumbed to his injuries four hours later.
Mr James Jacob Herbert aged 40 (Sinker) of 74 Edward Street, Blaenau Gwent, Abertillery.

On Saturday 4th May 1895 the official inquest took place at the Police Station, Abertillery into the circumstances of the accident that had occurred

(More information to be uploaded).