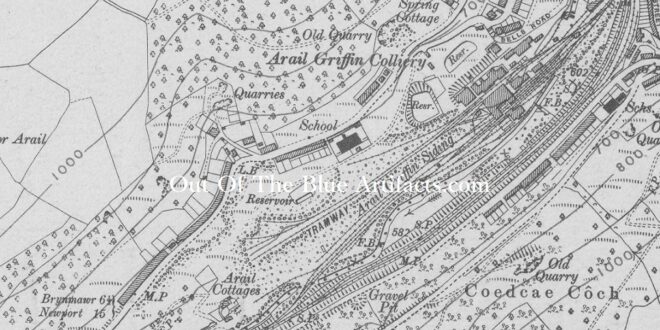 Six Bells Colliery – Old Waste Tip.
The Six Bells Colliery site was built close to the waste tips from the Durban Level which was situated up on the mountain just below where the television transmitter is today. The Durban Level owned by T. P. Price (owner of the Penybont Tillery Colliery was tipping their waste on the grounds opposite the old Six Bells Inn where the Old Age Pensioners Home is today over the railway line across a small tram line bridge. A section of this waste tip was removed to build the Bethany Chapel.

When the colliery was sunk and went into production the waste they produced was tipped further south, this tip gradually built up and is now the site where the Squire Cars showrooms are today. When there was no more space to tip colliery waste the company constructed an aerial rope-way to transport the waste to the top of the Arael Mountain close to the old Vivian Colliery tip. The route chosen was from the washery at the southern end of the colliery and straight up over to the top of the Arael Mountain at Cefn Bach travelling between the Arael School and houses at Warm Turn, Aberbeeg.

Points of interest – I am unsure where the name Arael comes from though I believe all areas named after it derived from the mountain. In Mr Edmund Jones book from 1779 of the history of Aberystruth he mentions the name of the mountain as originally being known as the Beacon Mountain, later renamed Arael and thereafter constantly reported as being Arael up to the mid to late 19th century. Though from then it is constantly written in different spelling variations. There is Arrail as in Arrail Street, Six Bells. Arail Farm also spelt Arael and Arill Farm. Arael Mountain, Arael View, Housing Estate, Roseheyworth. The colliery was known as Arail Griffin and Arael Griffin. In my opinion the correct spelling is Arael as in the early reports and everything connected with that name comes from the same source though sadly been corrupted over the years.