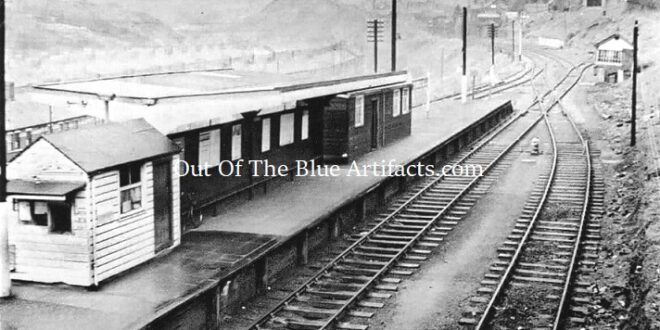 Over the years as the village grew, the need for a railway station or a halt for passengers from Six Bells to travel by rail was proposed on many occasions.

In 1936-37 the G.W.R finally put in motion a plan to have a railway halt installed at Six Bells between the Vivian Colliery and the Arrael Griffin Colliery. The installation didn’t go well at first as there was opposition by the land owner and the estate refused to sell the required land.

In June 1937 it was reported that the negotiations between the G.W.R and the estate for the purchase of the required land necessary to construct the railway halt went well and the sale was to go ahead.

It was hoped that the railway halt would have been open for the summer season though as the negotiations on the sale of land didn’t go as expected the opening was delayed. The Great Western Railway Co hurried the scheme so that the railway halt could be opened for passenger traffic before the winter service of trains were scheduled.

The Official Naming of the Railway Halt.
In July 1937 a report stated Mr William Williams of Six Bells moved at the Abertillery Trades Council that the Abertillery District Council be asked to request the G.W.R to name the railway halt at Six Bells the Hafod Van Halt. Hafod Van was the original Welsh name for the spot where the halt was being erected. Also the Welsh name would prevent confusion as there was already a Six Bells Halt in the Eastern Valley’s. His motion was carried. The report explained the translation of the name Hafod Van, Hafod means “Summer House” though Van was a little obscure and its meaning at that time was not known. 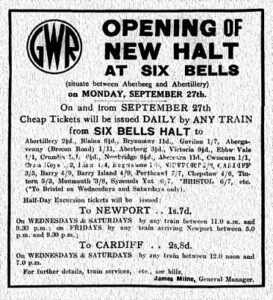 The Official Opening of the Halt.
On Monday 27th September 1937 the Six Bells Railway Halt was officially opened  The first train to call at the halt was the 5.26 am with the first ticket being purchased by Mr. J. C. Smith of 59 Castle Street, Abertillery. Mr Smith was travelling to Crumlin for work at the Navigation Colliery. Representing the G.W.R at the Six Bells Railway Halt were, Mr Walter Davies acting station manager, Abertillery and Mr D. F. Miles clerk at Cwmbran. The engine driver was Mr C. Davey, the engine fireman Mr L. E. Thomas and the guard was Mr. George Barrell.

The second passenger to book a ticket was Mr F. Betteridge of 17 Bryngwyn Road, Six Bells who worked in Cwmcarn. The next 3 passengers all worked at North Celynen and named as Mr Rowland Hill of 16 Richmond Road, Mr A. Williams of 3 Coronation Road and Mr Fred Wynn of 3 Aberbeeg Road.

The additional information above was kindly supplied courtesy of Mr Bryan Boots.

There didn’t seem to be any ceremony and the connection and opening installation went mostly unreported.

The Six Bells Railway Halt was of the modern design and had the advantage of booking facilities and arrangements for the acceptance of parcel traffic. It had full passenger service with cheap travel facilities extended to other adjoining stations. 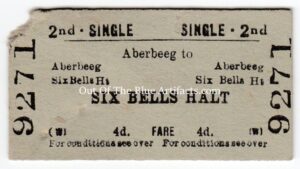 On the day of the opening a special excursion was announced for the following Friday to visit Messrs Cadbury’s Works at Bournville.

Seen opposite is an original train ticket issued 2nd class from Aberbeeg to Six Bells Halt, from the 1950’s.

Later Years.
The Six Bells Halt was taken out of commission and dismantled in the 1960’s. The railway line was still in use by the company for the transportation of coal from the Rose Heyworth Colliery further up the valley. In 1986, after the closure of the colliery the railway lines were removed, there was hope that a new railway service would be provided at Abertillery though plans were abandoned. Later the old rail route from Aberbeeg to Abertillery was made into a walkway and cycle track. The Six Bells Railway Halt was located on the route.

The Aberbeeg Park Run.
In October 2018 the Park Run Organisation incorporated Aberbeeg into the National Park Run events. The old railway route from Aberbeeg to Abertillery is the Park Run’s course.

It is entirely organised by volunteers – email aberbeeghelpers@parkrun.com