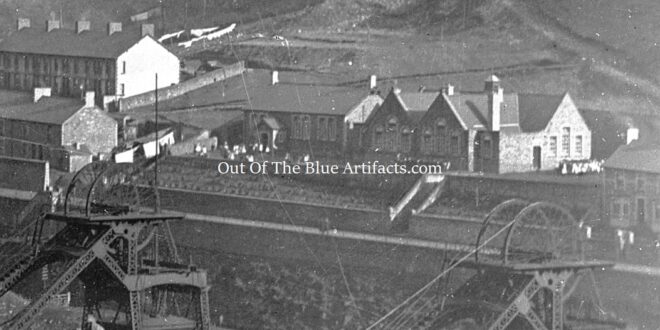 Six Bells Infants School.
Until 1890 the village of Six Bells, Abertillery was sparsely inhabited with just a couple of coal levels and a handful of cottages. The children of the village used to have to travel to schools outside the village such as Abertillery or Aberbeeg. In the late 1880’s the population was growing and when Messrs John Lancaster Co sunk the Arael Griffin, Six Bells Colliery in 1891 there was an influx of mineworkers and their families, houses, churches, shops and schools were needed for the growth in population. The area of Six Bells fell within the Llanhilleth Parish and in 1890 the Llanhilleth School Board foresaw the need for a school at Six Bells.

On Wednesday 2nd July 1890 a monthly meeting of the Llanhilleth School Board was held at the schoolroom, Aberbeeg. Those present were as follows – Mr W. Thomas (Chairman); Mr J. Price; Mr G. Harris; Mr J. Lewis; Mr W. Evans; Mr E. Lawrence (Clerk); Mr W. Williams; Mr H. Jones and Mr T. Phillips of the Aberystruth Board: At this meeting Mr Lewis submitted a plan of the proposed new infants school near Six Bells, the plan was examined and accepted. 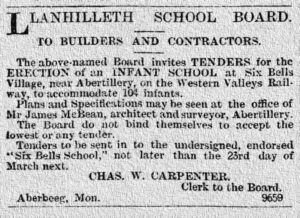 In December 1890 the site for the new school was changed, the council were urged to erect the school as soon as possible and the seal of the School Board was affixed to the agreement. The Llanhilleth School Board received two tenders for the construction of the infants school – Mr A. P. Williams of Abertillery at £1,260. 0s. 0d. and another from Mr Jones & Son of Newport for £997. 0s. 0d. The tender of Mr Jones & Son of Newport was accepted.

On Thursday 2nd July 1890 a monthly meeting of the Llanhilleth School Board was held at the schoolroom, Aberbeeg. Those present were as follows – Mr W. Thomas (Chairman); Mr John Lewis; Mr G. Harris; Mr W. Lewis; Mr W. Evans; Mr C. W. Carpenter (Clerk & Inspector); At this meeting the loan amount of £1,200 for the new school was broken down as follows – Cost of building and boundary walls etc £997. Estimate cost of fittings and furniture £47. Architect’s commission and expenses etc £45. Legal expenses £10. Water supply etc £100. The site was stated as being a good one with ample provisions for future extension with grounds being 2,420 square yards.

On Tuesday 15th September 1891 at a meeting of the Llanhilleth School Board a mortgage of £1,040 on the Six Bells Infants School was discussed. 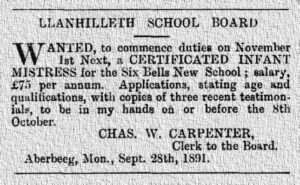 In October 1891 the Llanhilleth School Board invited tenders for the post of headmistress for the new Infants School, Six Bells with a salary of £75 per annum. At the same time cleaners were also wanted at the Aberbeeg School with a salary of £24 per year.

The Opening Commemoration Evening.
Prior to the official opening a public meeting was held on Thursday evening 31st December 1891 to commemorate the new school being built. Mr William Evans presided with members of the Llanhilleth School Board.

The Official Opening of the New Infants School.
On Friday 1st January 1891 the new Six Bells Infants School was officially opened under the superintendence of Miss Moses late assistant at the Aberbeeg School and Mr C. W. Carpenter attended the opening. About 50 children were registered at the school and it was reported that that figure would be augmented over the next few weeks. Mr Thomas the chairman of the board was called upon to formally declare the school open.

The chairman explained why the school was opened on Friday 1st January, he said the school had received a grant from the government of 10s. per child per annum on the average attendance, if the school was not opened on the 1st day of January they would not get a penny until the 1st day of the following month. The 13s. taking out the holidays would be 1s. per month, if there was an average of 60 children in the school they would lose about £3. The chairman also remarked on the fact that the people of Six Bells were working hard to get a reading room and he had hoped that a library would soon be provided.

The Contractor and Architect.
The contractor was Mr Jones & Son of Newport.

In March 1894 the Llanhilleth School Board invited applications for a cleaner with a wage of £1 per month.

On Thursday 24th February 1898 a monthly meeting of the Llanhilleth School Board was held at the schoolroom, Aberbeeg. Those present were as follows – Mr W. Thomas (Chairman); Mr Mr W. Lewis; Mr Dan Lloyd; Mr H. Lewis; Mr J. Evans and Mr C. W. Carpenter (Clerk): At this meeting the need for a new school was discussed, the population at Six Bells was on the rise and that the School Board were going to approach the Education Department for sanction to provide a new school on ground next to the Infants School at Six Bells. The new school would be a mixed school. 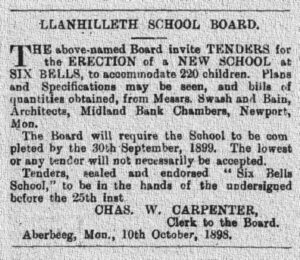 In October 1898 the Llanhilleth School Board invited tenders for the erection of a new mixed school at Six Bells to accommodate 220 children. The plans and specifications could be seen at Messrs Swash and Bain, architects, Midland Bank Chambers, Newport, Monmouthshire.

In March 1899 the new mixed school at Six Bells was reported as being under construction.

In November 1899 the Llanhilleth School Board invited applications for the following posts at the Six Bells new mixed school – A certified assistant master with a salary of £75 per annum, rising by yearly increments of £5 to the total of £100. A certified assistant mistress with a salary of £62. 10s. 0d. per annum. In October 1899 the school board also invited applications for a caretaker and cleaner with a wage of £1. 12s. 0d. per month.

In December 1899 the post of assistant headmistress at the new Six Bells Mixed School was given to Mrs Williams. The post of caretaker and cleaner was given to Mrs Carter. Mr Dan Davies of Pontlottyn was appointed assistant master, Miss Moses, teaching staff and Miss Maggie Davies as monitress.

The new Six Bells Mixed School had 160 pupils on its register.

On Tuesday 13th March 1900 a monthly meeting of the Llanhilleth School Board was held, those present were as follows – Mr William Thomas (Chairman); Rev D. Felix; Mr R. Downs; Mr W. Lewis; Mr T. Phillips and Mr C. W. Carpenter (Clerk): At this meeting Miss Pritchard was appointed Monitress at the Six Bells, School, Miss M. A. Howells was appointed pupil teacher at the Six Bells Mixed School.  A letter was read from the secretary of the Quakers Yard Truant School, stating that they were willing to receive truant boys for terms of three months at 7s. per week. They were then allowed home on license, if they did not attend school afterwards the license would be revoked and they would be sent back for a further period of three months. 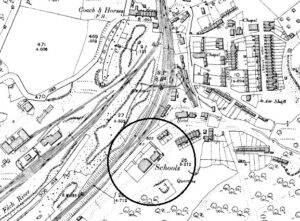 The Official Opening of the New Mixed School, Six Bells.
On Wednesday 28th March 1900, the new Mixed School at Six Bells (as seen circled next to the Infants School on the map right) was officially opened. Mrs Felix had the honour of opening the new Six Bells Mixed School.

Those present were as follows – Rev D. and Mrs Felix; Rev T. C. Davies; Mr D. Lloyd; Mr R. Down and Mr W. Lewis (Members of the Board); Mr C. W. Carpenter (Clerk); Mr H. Harries (Attendance Officer); Mr Jeffries and members of the School Board Staff: The total cost of the new mixed school was £2,330 which was the limit laid down by the Education Department.

The Contractor and Architect.
The contractor was Mr Phillips. The architect was Messrs Swash and Bain.

Facts and Figures.
Mr D. Lloyd said that the growth in population had necessitated the providing of increased school accommodation. Mr Lloyd stated that the growth of school accommodation under the school board had been very great, figures showed that in 1889 the school board income was £448. 5s. 9d. with the expenditure of £528. 14s. 10d. while grants earned average 14s. 4d. 0d. 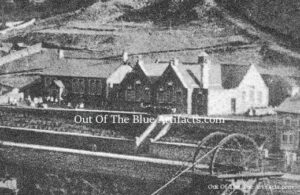 On Tuesday 29th January 1901 at a monthly meeting of the Llanhilleth School Board, the following gentlemen attended – Mr Dan Lloyd (Chairman); Rev D. Felix; Mr William Thomas; Mr R. Downs; Mr W. Lewis; Mr T. Phillips and Mr C. W. Carpenter (Clerk): At this meeting Mr C. W. Carpenter reported on the threat of subsidence endangering the school. Mr Thomas said he had examined the place and considered it was safe. Mr Carpenter said it was dangerous and needed to be seen to.

Mr D. J. Badger.
In March 1913 Mr D. J. Badger was appointed the headmaster at the Six Bells School. He was previously teaching at Gelli Grug and prior to that Aberbeeg.

In July 1922 Master Mervyn Badger, the eldest son of the Headmaster Mr D. J. Badger was awarded a scholarship of £45 per annum at the Hereford Cathedral School under the headmaster-ship of Dr Crees.

It was stated that the Six Bells Infants School had badly cracked walls inside and out, the new wall erected by the Ebbw Vale Company (who leased the collieries from the Lancaster Co) was badly damaged, it was of opinion that it was caused from severe subsidence due to mining operations. A few months later it was reported that the cracks in the walls of the school had got worse and the retaining wall had fell onto the main road. The council were to send the surveyor to examine the site.

In June 1925 Miss Gladys Lewis was appointed to the Six Bells Infants School in the absence of Mrs Cecilia Morgan.

In February 1926 the post of cleaner came up for tender. The shortlist was as follows – Mrs L. Wakefield, Old Farm Cottages, Six Bells, Miss C. Cheedy of 10 Windsor Road, Six Bells and Mrs W. Down of 22 High Street, Six Bells. After a ballot it was resolved to appoint Mrs Wakefield.

Mr John James.
On 31st March 1933 Mr D. J. Badger the headmaster at the Six Bells Mixed School retired after 39 years service. The staff of the Six Bells School presented him with a wireless receiver bearing a plate with an inscription. Mr John James of 2 Brynawel Terrace, Aberbeeg, became the new headmaster.

In September 1936 the council were alerted to the collapse of the retaining wall at the rear of the Six Bells School. 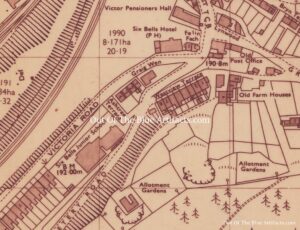 The Later Years.
At some point the Six Bells Infants School was demolished a new one was built of corrugated tin-sheeting on the side of the mountain above Six Bells.

In 1972 the Six Bells Junior School (as seen on the map right) closed owing to subsidence, the pupils were transferred to Bryngwyn School. The site was later taken over by an Engineering Company. The mixed school building is still standing.