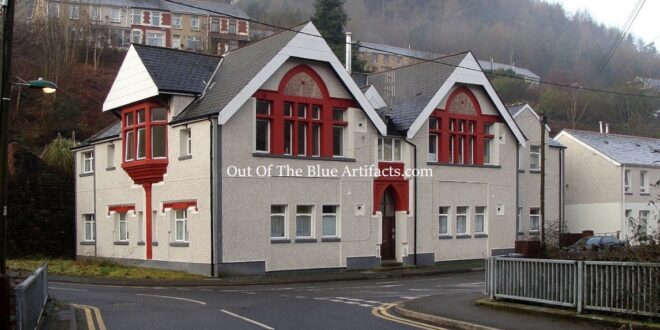 Six Bells Miners Institute.
In 1902 the Arrael Griffin Colliery Six Bells, owned by the Lancaster Co, had a miners institute built at a cost of £3,000.  Mr Charles T. Part J.P., St Albans, Hertfordshire, one of the directors of the firm of Messrs John Lancaster & Co having performed the opening ceremony. It was intended that Mr Part would be the manager of the institute though there was to be a committee of management selected from the employees at the colliery. 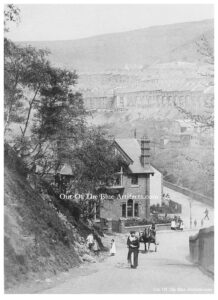 Description of the Institute.
The Six Bells Miners Institute (described at the time) was erected at the corner of the Arrael Road and built of Ruabon bricks with red Mansfield facings and the whole structure which is enclosed within railings presents a most pleasing appearance and is approached from the road. Over the entrance which faces the village there are the arms of Messrs John Lancaster & Co Ltd, a Griffin and Six Bells representing the old village, along with other floral decorations finely set in plaster.

Large bay windows afford good light to the smoking and billiard rooms which were on the left and right respectively as the Institute was entered, over the windows there was a balcony which was reached from the landing on the first floor and large gables of half timber set on the top of the building to great advantage. The smoking and billiard rooms were each 30’ft by 20’ft with a height of 12’ft and were each provided with refreshment bars.

In addition to the bay windows already mentioned there were several windows on the side and all rooms throughout are well provided for in the way of light. In the smoking room there was an hydraulic lift which served the first floor with refreshments. A pitch-pine staircase lead to the first floor and over the billiard room there was a spacious club room measuring 20’ft by 16’ft and on the right hand side of the landing, reading and games rooms were provided, the latter containing two ping-pong tables and other occasional tables for chess, draughts etc.

A feature of the institute was the reading room which was supplied daily with local papers and periodicals etc. There was a splendid well lighted and commodious billiards room in which two full size tables were placed. Membership was entirely voluntary on the part of the workmen, the subscriptions were fixed at the nominal sum of 6d. per month, for which the member would be entitled to all the advantages of the institution, except as regards the billiards

The institute was well provided for in the matter of lavatory accommodation and was fitted throughout with electric bells and gas etc. Apartments for the caretaker had been arranged for at the back and everything had been done to meet the convenience of the club members

The institute provided alcohol limited to just beer and at a quantity of just three pints per member per day, a rule which was strictly enforced.

The Contractor and Architect.
The contractor was Mr A. P. Williams of Abertillery. The architect was Mr C. Telford Evans of Cardiff. Mr Walker of Six Bells superintended the brickwork.

Mr Part unlocked the door with a silver key with which he was presented by the architect and afterwards made an inscription of the building.

In a speech Mr Part said  “The object he had in giving this institute was two-fold, first to provide a place for the men to have recreation after their work in the pit and secondly was to try and do what they could to make sure the men in the village drank less than they did at the present time”. He said “The company paid a very large sum in wages and were told that a large amount went to the public house”. He said “He had nothing to say against the public house but he would rather their men join this institute where they could enjoy themselves in games or reading without feeling the need to drink”. He also stated that in these days of limited companies it was difficult for the masters and men to meet together and he hoped that such an institution as this would show that the interests of masters and men were identical.

Later Mr Jeffreys proposed a vote of thanks to Mr Part and said the district was very grateful to him and hoped he would come to the village again. Mr Willis seconded the motion which was carried with acclamation.

The party retired for light refreshment.

The Six Bells Club.
The Six Bells Miners Institute ceased to be an institute in the late 1930’s and was converted into a club. The old institute building was officially registered as The Arrail Street Club in 1939 and had 383 members.

The complete list of management and landlords and landladies was kindly supplied courtesy of Mr Bryan Boots.

The Later Years.
The Arrail Street Club closed in the 1980’s and was recently converted into social housing with self contained flats.

Point of interest – The builder and contractor responsible for the construction of the Six Bells Miners Institute at Arrail Street was Mr Alfred Prosser Williams, Mr Williams was one of Abertillery’s largest building contractors. He was born on 25th March 1849. Some of the most well known building projects completed by Mr Williams were as follows – The re-building St Michaels Church, the New Market Hall, the Globe Hotel, the Abertillery Vicarage in Church Street, the Co-operative Store in Church Street, Abertillery, the Blaentillery School, Queen Street School, Arael School along with many other buildings and he also built the Globe Picture House at Blaina.

Mr A. P. Williams was the first person in Abertillery to have a private telephone installed in his residence Gwentland House, Oak Street, Abertillery. Upon his retirement he went to live at Herbert Hall, Crickhowell, he later came back to Blaina to supervise building work and lived at “Lismore House” New Bennett St, Blaina.

Mr Williams’ mother was a direct descendant of the Vaughan’s of Tretower Court, Crickhowell also Davy Gam who was killed at the battle of Agincourt 1415, and Knighted on the battlefield by King Henry V. Sir Davy Gam was a Llewellyn by name and was from the Herbert and Vaughan families.