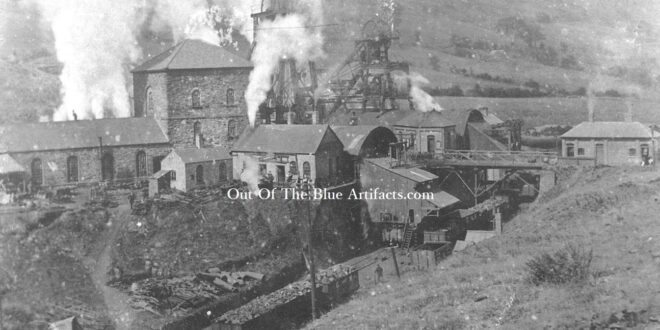 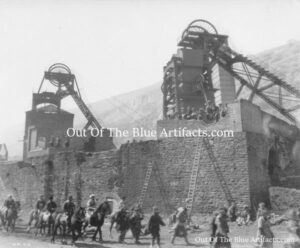 The Film.
The film “Things To Come” – Whither Mankind was being adapted for the screen under the personal supervision of Mr H. G. Wells, the film itself was based on his story “The Shape of Things To Come”. The producer was Mr Alexander Korda, directed by Mr William Cameron Menzies , filmed by Mr Georges Perinel and edited by Mr Charles Crichton and Mr Francis D. Lyon.

Starring Mr Raymond Massey, Mr Ralph Richardson, Mr Cedric Hardwicke, Miss Pearl Argyle and Miss Margaretta Scott. The production team was looking for a suitable filming location. The South Griffin Colliery which had been idle since 1921 and which is utterly derelict had been selected by the London Film Productions as a suitable spot for the making of a portion of a film which was to depict what the future would look like in the year 2035 after major conflict. 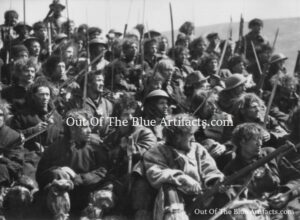 The Film Extras.
Could two-hundred ex-service men and territorials be obtained at three hours notice and act as extras in this production? That was the question put on Monday to Mr D. M. Jenkins manager of the Ministry of Labours Employment Exchange at Blaina.

The Film Extras Wages.
No difficulty was the answer, and within a few hours about 2,000 men were interviewed and the necessary selections made. The men were employed at the rate of 16/- per day.

Masses of debris, pithead gear, broken down colliery engine-house buildings and slag tips all form part of the “natural” setting for this part of the film which predicts life 100 years from the time of filming. 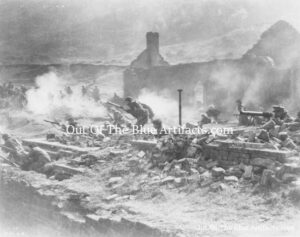 The Logistics.
At 7 o’clock on Tuesday morning these employed men, most of whom have minds fresh with the memory of fighting experiences in the 1914-1918 carnage were ready for their new work at the South Griffin Colliery. With them they had the rifles and uniforms handed out to them the night before when they were told their duties. Tattered ribbons of clothes, faces smeared with grease paint and grime, string and sacking to cover legs and rifles (many of the kind used in the Boer War) in hands. The miners were so gruesome, realistic and horrifying that their own children wouldn’t have recognised them.

The taking of this colliery, for the purpose it is supposed to be an oil one, by the revolutionaries is a strong connection in the story, were modern civilisation has collapsed and law and order have vanished. A dummy was taken the the head gear and tossed down from the wheels.

The noise of the battle was only punctuated by the production staff’s whistles which filled the air around Bournville on Tuesday and Wednesday and the miners did not spare themselves in their persistent efforts to make their part of the film as realistic as possible while they stormed the brick walls, charged fiercely, fell face forward as the guns “spat death”.

The Film Crew.
The director of the film was Mr William Menzies, the cameraman M. Georges Perinal and assistant director Mr G. Boothby had charge of Wednesday’s operations.

The biggest thrill which was watched by thousands on Wednesday afternoon was the cavalry charge. Naked swords glinted in the May sunshine and the weirdly-attired horsemen tore into the assault. A banner with a futuristic logo was held aloft and blood-curdling yells gave an intense atmosphere. 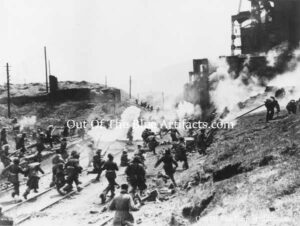 The Injuries.
One man stumbled out of the way of a horse and was hit by the second with a third trampling over him. The attack was immediately halted by a terse “cut” spoken through a metal megaphone. Ambulance men on the spot rushed the man to a doctor who was taken to the scene by a car and the revolutionaries snatched the opportunity to have a cigarette.

The injured man was Mr William Newman, Hope Street, Blaina. It is understood he is suffering from shock and minor injuries. An ambulance man told the South Wales Gazette that over half a dozen men were treated on the Tuesday for “jammed fingers” and other non serious injuries

The School Children.
On Tuesday and Wednesday there were thousands of sight-seers and school children from Abertillery and Blaina were conveyed to the South Griffin Colliery to see the filming operations as an educational trip. The school children of the district who had advantageous views of the shooting of the film were also given the opportunity to see the film-making paraphernalia, sound van, concealed cameras in the ground and hidden microphones, with which they took keen interest.

Blaina has temporarily become a miniature Hollywood. It was said however, that the song of the nightingale which had been previously heard in the small wood behind the South Griffin Colliery has vanished.

The Blaina and District Council Meetings.
Friday May 31st 1935. At a council meeting – Capt E Silk said that Mr G. Menzies who was in charge of the film production at the South Griffin Colliery last week had declared the Blaina and Nantyglo men who were given work as extras were the best he had worked with in that capacity. Capt E. Silk added that something like £500.00 had been paid out over 4 days in connection with the work, thirty to forty production staff had lived in the district and it meant that all together about £1,000 had been brought into the town.

In June 1935 at a Blaina and District Council meeting photographs of the local men in action on the film set at Bournville were handed round the council chamber, Mr J. L. Adams and Capt E. Silk M.A., LL.B., gave a set of the photographs to the Hafod-y-Ddol Secondary School where they would be kept along with other mementoes of things in the district. Later a public exhibition of the photographs took place.