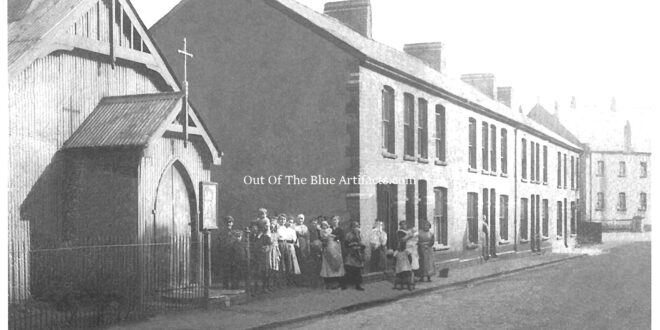 St John’s Church Six Bells.
In the early 1900’s the Anglican Church had held meetings and the Rev D. Felix, the rector of Llanhilleth had conducted services at the Six Bells School.

In February 1905 it was reported in the Parish Magazine that a loan of £1,200 had been negotiated and the vicar Rev H. S. Rees was able to proceed with the erection of a chancel, vestries and side chapel to an existing nave? The documents had been fully signed and it was stated that within the next six weeks the work of erecting the St John’s Church, Six Bells would commence.

I don’t think this project was put into motion as it was reported to have been planned to build “onto an existing” nave and at a cost of £1,200. It was later reported that the reverend had decided to have an iron structured church built at half the cost. The original planned, proposed church may have been in a different location?

The Official Opening of the Church.
On Monday 10th April 1905 the St John’s Church was officially opened. The Rev D. Felix had acquired land from the Hanbury Estate and Messrs J. Lancaster & Co. The site for the church was on a small piece of ground between Arrail Street and River Row (later re-named Griffin Street) close to the Six Bells Miners Institute. The dedication service started at 8.30am with the celebration of the Holy Communion with the preacher being Rev E. Morgan B.A of Trevethin and in the afternoon a special dedicatory service was held with the Rev J. L. Croft of Cwm as the preacher. On the following Tuesday 11th April Rev Owen Davies of Blaina preached and in the afternoon service baptisms took place.

The Contractor and Architect.
The contractors were Messrs Humphries of Knightsbridge, West London.

Description of the Building.
As mentioned the Rev D. Felix decided to go in for the option of having an iron structured church. The church was built to accommodate 300 people and the construction cost £600. At the time of completion £175. had been raised. Mr C. Hales of Hitchen gave a handsome font and other gifts towards the furnishings.

In May 1905 it was reported in the Parish Magazine that Mr Edwin Price of Somerset Street, Abertillery had presented a complete set of alter linen’s to the church at Six Bells and the vicar had received a letter concerning the organ that was in use at the church. The letter read ” This organ was presented to St John’s Church by the sidesmen of the Six Bells Mission on behalf of the mission and with the approval of the rector of Llanhilleth. Messrs G. Lewis; J. Legge; D. Phillips and J. Morgan being the sidesmen.

Later Years.
The St John’s Church was deemed unfit for purpose in the 1960’s and rebuilt on the same site. The entrance was moved from Arrail Street into Griffin Street. The new church was opened at Easter in April 1969. It is still in service today.