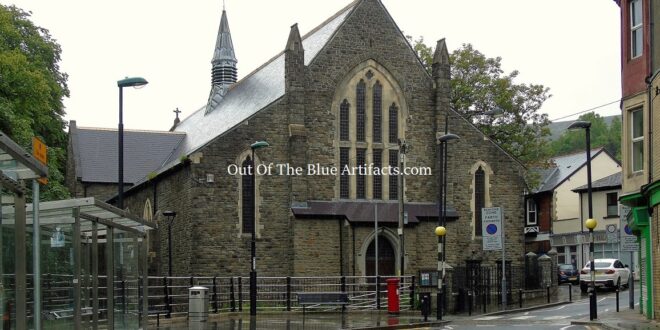 St Michaels Church Abertillery.
Abertillery in the 1830’s-40’s was practically non-existent, a few farms and one main small iron works owned by Mr Richard Walker of Trevethin, Pontypool, father-in-law to Mr William Webb, Brewster of Aberbeeg. Mr Walker’s Iron Works were situated where Tesco’s Supermarket is today. In the mid 1840’s Mr Walker went bankrupt and he sold the works. I am not sure if Messrs Conway and Pearce purchased it from him at the time or a while later?

Messrs Conway and Pearce later re-opened the works as the Abertillery Tin Plate Works and soon expanded their establishment. About the same time, the Cwmtillery Collieries were in full swing along with the start of sinking activity at Penybont Colliery in 1848-1850 the once small villages of Cwmtillery and Abertillery began to grow.

Up to this point all religious activity was centred around either Blaenau Gwent, St Illtyds in Llanhilleth or St Peters at Blaina and the people of Abertillery had to travel to attend religious services.  One route being up to the top end of the Cwmtillery valley and up over Mynydd James and down into Blaina, into the town and worship at St Pauls. A small group of churchgoers decided to hold services at Abertillery and they hired a room at the Royal Oak Inn (later to become the club house of Blaenau Gwent R.F.C., now demolished) for such purpose.

A while later a fund was set up for the purpose of building a church and school in Abertillery town. Messrs Conway and Pearce along with Messrs Brown’s of the Blaina Works, Messrs Price of the Penybont Colliery etc donated to the church and school fund, to provide religious activity and education for the people of Abertillery.

On Friday 27th August 1852 tenders were invited to build a church and school house, one advert was printed and published though the tenders had to be sent in separately for each build. The plans of which were in the office of Mr John Conway at Abertillery and information would be given by Mr Charles Medhurst of Abertillery who would show the site of the intended buildings. The tenders had to be sent in by the 7th September 1852 to Mr John Conway Esq.

The Contractor and Architect.
The tenders of Mr J. H. Evins of Abergavenny was accepted to build the both church and school under the supervision of the Architect Mr Norton of London.

In May 1854 the St Michaels Church was the first to be erected, at an estimated cost of £880. The Rev Daniel Rees, rector of Blaina was the first curate in charge. 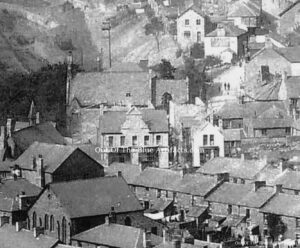 The Official Opening of St Michaels Church.
On May 18th 1854 St Michaels Church (as seen in the centre of the image left orientated left to right upon Church Street. The roof of the vicarage is visible behind and over the church roof) was officially opened. It was noted that it had been erected by the most liberal assistance of the Abertillery Tin Works proprietors Messrs John Conway and John Pearce and others. On the day a special train was placed upon the Western Valley’s railway which left Newport conveying a large number of residents to take part in the opening ceremony. The service commenced at 11 o’clock and the works in the neighbourhood was stopped for the occasion.

The usual formularies of consecration were commenced by the Bishop at the entrance of the church aided by Messrs Conway and Pearce and thirty two other dignitaries of the church, they proceeded to the altar where prayers were read. Later Rev Daniel Rees, Curate, read the service for the day after which Sir Thomas Phillips and Mr James Brown made a collection which amounted to £50. Later the party was treated to lunch by Mr Hallen of the Westgate Hotel Newport, where he provided a cold collation in a superior style of over 70 various dishes spread under a large marquee which was erected in the grounds and provided by Mr Pearce from the stores of Mr Francis of Llanelly.

In early 1875 St Michaels Church was deteriorating and the building was becoming unfit for purpose. Plans were made for a complete renovation including the purchase of a new organ.

In April 1875 St Michaels Church was reopened after extensive repairs being made. The new organ was installed. It was a Chancel Organ made by Messrs Flight and Sons, organ builders to the Queen, of 36 St Martins Lane, London. Some of the members at this time included – Rev H. Walters; Mrs and Miss Walters; Mr & Mrs P. A. Williams; Dr Hale and Miss Hale and Miss Jones:

In March 1892 the church windows on the eastern side had become dilapidated Mr Arthur Hill, painter & decorator of Cwm Street, Abertillery offered to replace them with new stained glass. The pattern was to be chosen by the clergy.

In October 1894 a new church was planned as the old had become unfit for purpose. A series of bazaars were held in the Market Hall, Abertillery to raise funds for the re-build.

In June 1898 the demolition of the St Michaels Church began. 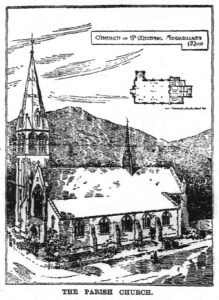 The New Church Opening.
In June 1899 the Consecration Service took place. The Bishop of Llandaff consecrated the new Church of St Michael and was attended by Mr J. E. Ollivant the Chancellor, Mr F. J. Smith the registrar and Rev C. E. T. Griffiths the rector of Trevethin and rural dean.

The new building was erected on the site of the old church on a different orientation and it accommodated 750 worshippers. The style of the church was of 13th century design. The walls were built from local stone with Bath stone dressings with the interior being built with Ebbw Vale buff brick with Bath stone capping. The church was heated with warm air through a system supplied by Messrs Musgrave & Co of Belfast. The stained glass windows were from the studio’s of Messrs A. Savell of Albany Street, London.

The Contractor and Architect.
The whole church was built by Mr A. P. Williams, contractor of Oak Street, Abertillery with the architect being Mr Mr C. B. Fowler F.R.I.B.A. of Cardiff.

In December 1904 the church was nearly complete though there were some problems which wasn’t reported.

The Completion of the Church.
In June 1906 the church was complete, the chancel, morning chapel, vestries and organ chamber was finished. The chancel was in the early English period and was 44′ feet long and 24′ feet wide with a tiled floor. The morning chapel was divided by a carved screen 26′ feet long by 14′ feet wide with a floor of tiles and wood block. The organ loft was situated over the choir vestry. A large bed and ventilation turret was fixed in the roof surmounted by wrought iron work. The internal dressings were of Corsham stone. A new gate was provided on the southern end of the church.

The Contractor and Architect.
The extra work was carried out by the contractor Mr J. Jones of Abertillery at a cost of £2,300 according to the plans of the architect Mr Telford Evans of Queen Street, Cardiff. The vicar was Rev H. S. Rees.

Several members came forward with gifts which included the following – A stone pulpit given by Mrs H. S. Rees of the vicarage in memory of the Rev Howell Howell (uncle) and Rev G. H. Griffiths (brother) the cost of the pulpit was £200; A stone alter rail given by Mrs Dawe, Mr W. Robins and Mr A. Robins in memory of Mr T. Robins (father); A brass eagle lectern given by Mrs Price of Oakleigh and the children of the late Mr D. Knight in his memory; Brass alter ornaments given by Mrs Harris of the Rolling Mill Inn; A font ewer given by Mr W. Hughes in memory of Mr A. L. Hughes (brother); The Lords prayer in carved wood given by Mr Neilson of Pontypridd in memory of Mr G. M. Neilson (brother) and a brass alter desk given by the members of the Communicants Guild.

The Donation of the Organ.
In December 1910 it was announced that Mr J. Edgar Webb of Aberbeeg had given an organ as a gift to St Michaels Church. The organ had been given as a memento to his late father Mr John Richard Webb. Mr Webb let the contract for the organ to Messrs W. G. Vowles Ltd, the well known organ makers of Bristol.

The organ had three manuals, 38 speaking stops with six non-changeable pistons, pneumatic action throughout and was blown by hydraulic pressure. It was said to be the biggest organ in the valley and had 2,078 pipes.

On Wednesday 21st December 1910 the organ was dedicated by the Bishop of Llandaff. The service was conducted by Rev H. S. Rees who was assisted by the local clergy. There was a large congregation which included the donor Mr J. Edgar Webb and his family. Mr Hubert Hunt the organist of Bristol Cathedral presided at the organ.

Point of interest – Mr Alfred Prosser Williams – A. P. Williams was one of Abertillery’s largest building contractors. He was born on 25th March 1849. He re-built St Michaels Church, the Market Hall, the Globe Hotel, the Six Bells Miners Institute, the Abertillery Vicarage in Church Street, he built the Co-operative in Church Street, Blaentillery School, Queen Street School, Arael School, along with many other buildings and also re-built the Globe Picture House Blaina.

He was the first person in Abertillery to have a private telephone installed in his residence Gwentland House, Oak Street, Abertillery. Upon his retirement he went to live at Herbert Hall, Crickhowell, he later came back to Blaina to supervise building work and lived at “Lismore House” New Bennett St, he died in 1932.

His mother was a direct descendant of the Vaughan’s of Tretower Court Crickhowell also Davy Gam who was killed at the battle of Agincourt 1415, and Knighted on the battlefield by King Henry V. Sir Davy Gam was a Llewellyn by name and was from the Herbert and Vaughan families.