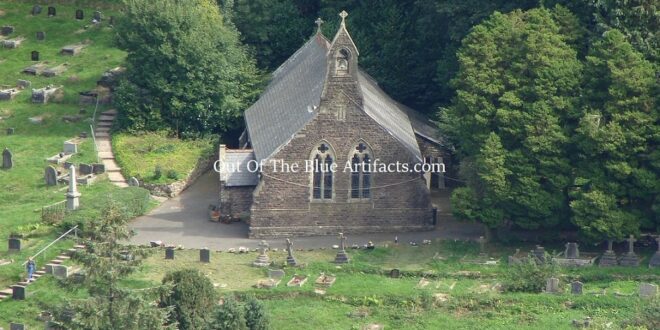 St Paul’s Church Cwmtillery.
Prior to St Paul’s Church being build the people of Cwmtillery held services in the Colliers Hall, which was of inconvenience to the worshippers and a new church was proposed and planned. The Rev Evan Davies was responsible for the cost of the church.

The Site.
The site which the church was to be built was given by the South Wales Colliery Company and was suitably situated at the north end of the village overlooking the colliery feeder.

The Contractor and Architect.
The contractors were Messrs E. Turner & Sons of Cardiff. The architect was Mr E. M. Bruce-Vaughan A.R.I.B.A. of Cardiff. 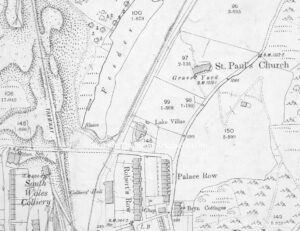 Mr Bruce-Vaughan handed the silver trowel to Mrs W. E. Williams who went through the customary ceremony of laying the first stone. A bottle containing several newspapers from the day was placed between the stones.

After the ceremony the party went back to Colliers Hall for tea. Among the ladies who presided on the tables were as follows – Mrs Walters; Mrs Chivers; Misses Anne and Mrs Chivers; Mrs Beech; Miss Stafford; Miss Wiltshire; Miss Ashley; Miss Brown and Miss Bridge and many others unnamed.

Description of the Building.
The church was of the English Gothic style with a nave 61′ feet by 30′ feet wide. A chancel 28′ feet long by 19′ feet wide and a vestry. The church had lancet windows filled with stained glass and also constructed with a stone Bell Tower. The external walls were built of red sandstone from Gilwern quarries the tracings being composed of Forest of Dean stone. The roof was covered with green tiles with red roof cresting’s. The seating was of varnished yellow pine. The church was to accommodate 300 people and cost approximately £1,100 exclusive of all boundary walls. The Hymn “All People That On Earth Do Well” was then sung with Mr Alf Chivers, organist at the Parish Church played on the harmonium, housed in a recess behind a reading desk on the right hand side of the chancel.

Vandalism.
On Wednesday 5th November 1890 it was reported that vandals had attacked St Pauls Church, Cwmtillery and broke over 30 panes of stained glass windows that had been placed into the new church over the previous few days.

The Consecration.
On Monday 19th January 1891 the church was consecrated. The Right Rev Richard Lewis D.D. Lord Bishop of Llandaff officiated at the consecration. A large congregation assembled at 11.00am when the proceedings took place. The gentlemen who took part in the ceremony were as follows – Rev D. O. Evans of Abertillery; Rev H. Howell’s rector of Blaina; Rev G. Lewis of Ebbw Vale; Rev T. Theophilus vicar of Tredegar; Canon Evans of Rhymney; Rev J. Rees B.A. vicar of Ferndale and several other curates who represented various parishes in the district. The church wardens were Mr G. Robins and Mr W. R. Williams.

At the ceremony, 90 candidates had applied to be confirmed, from places as far away as Ebbw Vale, Blaina and Nantyglo etc but owing to the bad weather only 60 turned up. Afterwards a public luncheon was held at the Colliers Hall. Special services were held through the following week on Tuesday, Wednesday and Thursday with the preachers being Rev H. Howell, Rev D. O. Evans, Rev W. R. Thomas and Rev J. Rees.

Mr Andrew Carnegie.
In July 1906 Mr Andrew Carnegie, the well known philanthropist donated £150 towards an organ for the church, equivalent to £17,400.00 in today’s money. The organ would replace the harmonium and was estimated to be at a cost of £300. Mr Carnegie offered to pay £150 as long as the remainder was met by the committee of St Pauls Church, Cwmtillery.

The Later Years.
St Paul’s Church is still in use at the present time.

Notes of Interest – An article in the Western Mail Newspaper dated Monday 13th December 1948, mentions St Paul’s Church bell. It tells the story of how the bell, once used at Cwmtillery Colliery to summon the men to work was given to the church of St Paul’s as a gift upon the advent of the installation of the colliery steam hooter. In 1937 while the bell was being cleaned and inspected, a sixteenth-century date was discovered on it. Legend has it as being once used to call monks to prayers, though it is a mystery as to how it got to Cwmtillery.

The bell was also mentioned in the book called “The Church Bells Of Monmouthshire”, it verified it as being originally used by the miners of Cwmtillery and given to St Pauls on the advent of the colliery steam hooter, though no mention of it being given to the colliers by local monks. The book stated that it bore the number 769(1?) and was measured at 14″ and a half inches in height by 18″ inches in diameter. It is now believed to be at the Abertillery Museum.