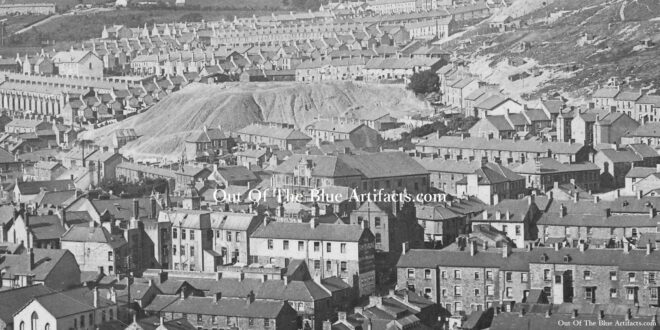 Sycpant Rhiw Parc – Rhiw Park Levels.
These are two of the oldest coal levels in the Abertillery area. The image shows the Rhiw Park waste tip in the centre of the image and the town buildings and houses built around it.

The Sycpant.
The Sycphant Coal Level was more than probably owned by Mr Francis Adams. Mr Adams was an old inhabitant of the Abertillery valley and was a publican and coal owner.

In 1880 this coal level was not listed on the list of collieries or after.

The Tramway Route.
The tramway from this colliery came down from Rhiw Park, Division Street and onto the railway where the Foundry Bridge was later built. The waste was dumped close to the entrance of the level across to James Street and upon the Rhiw Park area, later the tip was flattened upon which a children’s playground was built.

The Later Years.
In 1983 during the one-way traffic conversions and the re-routing of the major roads in the town, the Rhiw Park tip was partially removed and landscaped. It is still there today.