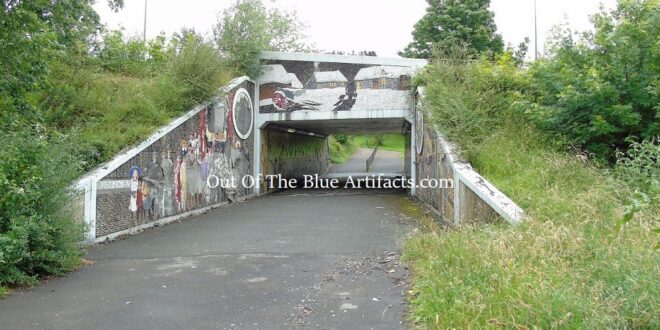 The A467 Main Road Underpass Mosaics – The Story

The A467 Main Road Underpass – Abertillery.
Before the 1974 local government reorganisation the county councillors of the Monmouthshire County Council asked for a number of road studies with a priority to improve the A467 from Newport to the Heads of the Valley’s. The work started in 1966 with various sections along its route being completed in stages.

The Abertillery to Brynmawr Section.
The Abertillery to Brynmawr section was 5.5 miles in length and cost £14.5million.
The section between Abertillery and Brynmawr began in 1986 and was completed in 1988 under the Gwent County Council. This long stretch took the route of the old disused railway line and included two overbridges, five footbridges, two river culverts, ten retaining walls and three subways. One of these subways was an underpass opposite the new Lymes Club from the path leading to Glan Ebbw Terrace to Carlyle Street. 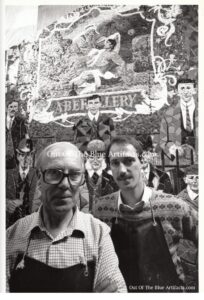 Messrs Kenneth and Oliver Budd.
The Gwent County Council wanted to have a mosaic in the subway at Abertillery and approached Messrs Kenneth and Oliver Budd, father and son, the accomplished artists and makers of mosaic art. Kenneth had previously helped the county council with artistic finishes on structures along the route and also constructed mosaic panels on a bridge at Pandy Park, Cross Keys.

Messrs Kenneth and Oliver Budd were given the commission to construct the mosaic at the underpass at Abertillery, they began researching into the town’s industrial past with the help of local historian Mr Bill Deasy. Newspaper reports stated they spent much time at Abertillery, Newport and St Fagans museums gathering documentation, material and photographs of Abertillery and the valleys.

The photograph above is – Copyright Herbie Knott/Rex Features. “All rights reserved.”

Mr Oliver Budd.
Mr Oliver Budd told of how the Gwent County Council – “Asked us to come up with designs for eight wall mosaics for this underpass. Initially we thought it would be attractive to feature the hill farms that were the main source of income before the industrial revolution brought the mines and the steel works to the town”.

“However, the council committee thought that a more comprehensive history was required so we kept the two headwalls as hill farms, summer and winter and put the rest to new designs, the chapel and the railway walls at one end and the Cwmtillery Colliery and Webb’s Brewery walls at the other”. “In the subway we put Warwills Foundry and the local tinplate works”.

“The mosaics were commissioned in 1987 and we were on site to install the panels from September to November 1988, both as the last guests of the Bush Hotel (featured in the roundel on the Webb’s Brewery wall)”.

“The roundels on each of the wing walls was a design idea taken from the illustrated London Newspaper from the turn of the century. They would show an overall scene then a detail of a building, person or detailed activity in a roundel, usually top left/right hand corner. It works well!!”

The Story of the Industry Depicted in the Mosaic.
The eight mosaic murals which decorate the A467 underpass depict life and work in the town during the 1890 – 1910 period.

The Northwest Wing Wall offers a reminder of Blaenau Gwent Chapel 1906 (demolished 1988). The main picture shows the congregation gathered for a Whitsun March – with a Sunday School banner held aloft. A particularly clever feature is the photographer taking a snapshot of the marchers from the railway platform on the opposite wall!

The Southwest Wing Wall reflects upon the important roll the railway played in the town at the turn of the 20th century. Abertillery once boasted three railway stations, one of which is depicted in the mosaic roundel.

The Northeast Wing Wall shows a view of Cwmtillery Colliery’s pit-bottom showing various aspects of mining including a pit pony, a caged canary and the miners looking thirstily at the brewery depicted opposite. A surface view of the colliery (now closed) is given in the roundel.

The Southeast Wing Wall another of the towns former industries is the subject of this wall, The mosaic represents Webb’s Brewery, Aberbeeg and gives an insight into a typical brewing scene of the time. The brewery has now been demolished. A delivery of Webb’s beer to the Bush Hotel is depicted in the roundel (incidentally this was where the artists stayed during the construction of the mosaic).

The main subway walls are also dedicated to industry.

The Southern Wall illustrates the tinplate manufacturing process which operated in the town from its introduction by the Conway family in 1846 until 1957, some 111 years. The factory was situated on the Ebbw River near to its confluence with the Tillery and abutted the Nantyglo tramroad which carried the necessary raw materials.

Starting at the eastern end of the subway the entire tinplate making process is shown as follows – “The iron was brought down from Nantyglo, reduced to ingot size pieces which were heated and rolled in a cogging mill, then reheated, rolled and doubled, reheated then re-rolled until they finally became packs of eight sheets. These were opened, producing slight oxidisation to prevent sticking during later rolling operations. The sheets were then trimmed to the required sizes, washed and pickle-cleaned in an acid bath (note tin dipping machine in background of the third arch). then rolled between cold rollers and annealed once more. All these were essential processes before dipping the sheets in molten tin. Finally, the sheets were cleaned and polished, sorted and packed into what were known as “basis boxes” before leaving the factory. (Budd K. – Artist).

The Northern Wall the site of the tinplate works is now occupied by Warwills Foundry which forms the subject of the northern wall. The firm was established in the town in 1874 by Mr John Ward Williams. In the early 1900’s the firm supplied castings for industry and produced many items still in local use, including many of the lampposts and manhole covers which can be seen in the town today. The artists have used the letters of the company’s name to illustrate the stages of the casting process at the time (shown from west to east).

A wooden pattern of the product was produced, painted in the colours shown here. These indicated the different treatments for each finished surface, e.g. black protrusions represent holes in the final casting. The finished pattern then had a sand mould taken from it, shown here in two parts coming together. The furnace was then tapped and the molten metal transferred from a large ladle into a smaller one to facilitate easier handling. The molten metal was then poured into the mould (note – 56lb weights used to hold the top of the mould in place as molten metal was poured in). After de-moulding the casting was cleaned by hand using wire brushes. This method took a considerable amount of time compared to the efficiency of sand blasting equipment used today. (Budd K. – Artist).

The Top Panels the scenes above the subway entrances pay tribute to the oldest industry in the area, farming. The same hill farm is depicted on each, at the eastern end in summer and the western end in mid-winter. 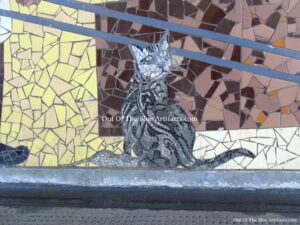 Sunny the Cat.
Mr Oliver Budd gave permission for me to mention that within their mosaic artwork his father Kenneth always placed a depiction of a dog and Oliver always included a cat. On the wall showing the scene from the activity at the Tin Works at Abertillery, Oliver placed in a small depiction of his pet cat Sunny. Sunny is no longer with us, but I think his inclusion on the wall will be a lasting tribute.

School Visit.
Before the unveiling of the work at the underpass Mr Roger Thomas, headmaster at Cwmtillery Junior School took pupils to see the mosaic, including Daniel Williams, John Bowd and Christopher Dyke. The children were told to remember the scenes were part of their heritage and that everything shown in the mural actually happened. 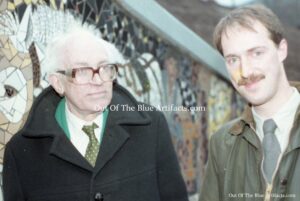 The Unveiling of the Mosaics.
On Thursday 22nd of December 1988, at 10.00am the Right Honourable Mr Michael Foot P.C., M.P., opened the new road and officially unveiled the works at the underpass. There was no TV coverage, even from B.B.C Wales, the unveiling of the mosaics at the underpass was sadly overshadowed by the tragic events at Lockerbie the night before. Photograph copyright Mr Oliver Budd.

Information.
The murals were created and constructed by craftsmen Kenneth and Oliver Budd following a commission from Gwent County Council during the construction of the A467. They cover a total area of 185.5m (1,898 square-feet) and are constructed from prefabricated German Buchtal tiles and Italian Smalti mosaic, surrounded by dolomitic limestone from Machen.

The panel were provided by the Blaenau Gwent Borough Council with financial assistance from the Welsh Office and the Wales Tourist Board. What I find sadly prophetic is that the information sheet ends with the words – “Please enjoy your visit and remember this site is part of your heritage”. “Please treat the murals with respect”. Wilful damage will lead to prosecution.

Also, thanks to Mr Herbie Knott for the photograph – Copyright Herbie Knott/Rex Features. “All rights reserved.”