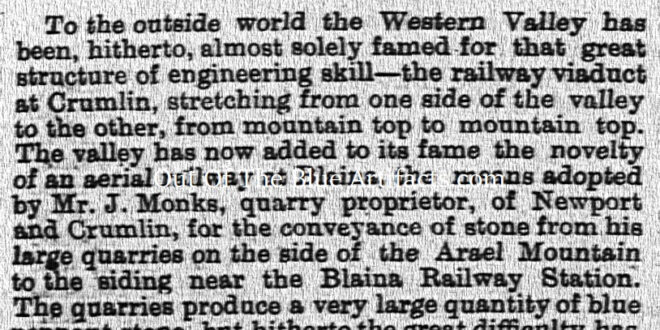 The Aerial Railway Cableway – Blaina.
Mr John Monks was a contractor and quarry proprietor. He quarried stone to use in his building work and owned quite a few stone quarries in the district. A few of these quarries was along the side of the Arael Mountain above West Side at Blaina. These quarries produced blue pennant stone, the supply of this much sought after stone was said to be practically inexhaustible running through the whole of the top of the mountain. The quarries which was being worked extended for about three quarters of a mile, formally the whole of the produce had to be brought down the the mountain on slides in a zig-zag path to the Great Western Railway at Blaina. Mr John Monks decided to have an aerial railway, cableway built so that he could bring the stone down quicker to make the quarries more productive.

The Aerial Railway Cableway Installation.
In December 1901 the Aerial Railway or Cableway, of the Ropeways Syndicate Company Limited with all the work being carried out under the supervision of Mr J. Pearce Roe and Mr J. L. Lindsay was constructed. The Cableway was considered unique at the time of construction and consisted of a span of 750 yards from the quarry to the landing stage and as the journey was performed by an endless-rope it was 1,500 yards total length of one inch “Plow Steel” cable which was of exceptionally high grade. The net loads carried were 14 cwt and the gross loads including the tram and cage were about 25 cwt.

The operation of the Aerial Cableway was entirely automatic, the weight of the descending cage full of stone sent an empty cage back to the summit controlled by a powerful brake worked by one man on the higher station.

The Opening of the Aerial Railway Cableway.
On Monday 3rd March 1902 the Aerial Railway was formerly opened. The ceremony was performed by Mr J. Monks in the presence of a large number of engineers and representatives of the leading industries in the valley’s. Mr T. Vachell J.P., presided and explained how hard it had been to get stone from the quarries though as a result of a consultation with Mr Monks and the Ropeway Syndicate Company Limited, they had the much needed cableway before them and he hoped it would bring much prosperity to Mr Monks and to Blaina in general.

Descriptive Account.
Mr J. Monks then cut the red, white and blue ribbons which held the wheels of the cage and declared the Aerial Railway open for traffic. Amid cheers the cage was slung from the rope and containing an empty cage started on its journey. The report stated – “Moving slowly at first, as the laden carrier on the other side gained momentum it was soon speeding along at a terrific rate over the fields, over the river Ebbw Fach, over the pasture land beyond. Grazing cattle looked up at first in wonderment and then started racing about the fields. The cage continued to rise more slowly until it was out of sight.

The full cage was coming closer all the time and after attaining its maximum speed about three quarters of the way down gradually drew up to the landing stage and came to rest ninety seconds from the time it was started. The load was substituted for an empty carrier and after a full load was put on at the top a second journey started, the first cage coming to the bottom again within four minutes from the commencement“.

Alderman G. R. Harris the oldest public representative of Nantyglo and Blaina welcomed Mr Monks and his enterprise to the town. After the company were officially photographed they retired to the Church Institute where a luncheon was laid on by Messrs Dowdall of Newport.

After the many toast and wishes of prosperity Mr Monks spoke of his gratitude for the help that he had received from the firms in the neighbourhood who had rendered him every assistance in overcoming the many obstacles they had met. Mr Williams, Traffic Manager of Messrs J. Lancaster & Co and Mr Hervegh of the Pyle and Blaina Works also spoke. Mr Coulson proposed the toast of “the ladies” to which Mrs E. J. Monks responded and a toast to the “chairman” was proposed by Alderman Harris supported by Rev D. T. Davies.

The Later Years.
I don’t know how long the Aerial Railway was operational but the ruins of its buildings are still upon the side of the mountain along with the iron upper return wheel.