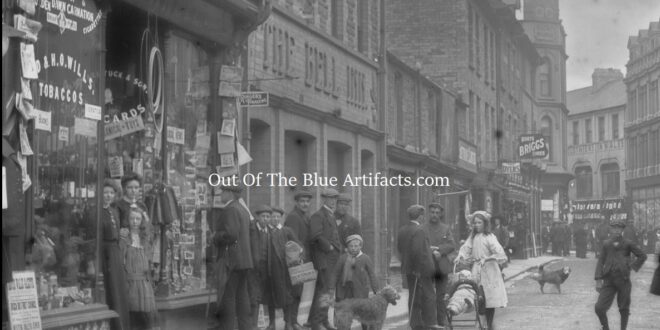 The Bell Inn – Abertillery.
During the late 1860’s the Bell Inn, Abertillery was constructed, it was situated at Market Street though at that time the area was known as Fords Row? I am not sure if the inn originally extended down through to Somerset Street at this time though it did later with entrances top and bottom and the both areas were known as the Top Bell or Bell Tap and the Bottom Bell.

The Death of Mr George Bence.
In 1875 Mr George Bence died and the Bell Inn, Abertillery was in the hands of the executors of Mr G. Bence. Mrs Mary Bence, widow was the licensee.

Mr and Mrs Fairclough were old inhabitants of Abertillery. Mr James Fairclough’s parents were Mr William and Fanny Fairclough, in 1861 they lived at Perseverance Cottage, Abertillery, close to town.

On the 1911 census Mr Benjamin Valentine S. Thomas born in 1882 at Abertillery and his wife Mrs Gwladys Thomas nee Williams, born 1886 at Abertillery lived at the Bell Inn with their daughter Miss Mary Thomas, born 1911 at Abertillery. Also at the premises were – Miss Maggie Prosser, a servant and Miss Maud Jones, also a servant.

Mr Parfitt.
In 1923 the newspapers reported the transfer of licence at the Bell Hotel, Abertillery from Mr William Brown to a Mr Parfitt. Mr Parfitt was a short term licence holder and there is not a great deal of information about him, if any.

The Death of Mr William Brown.
In February 1925 Mr William Brown ex-landlord of the Bell Hotel took over the licence of the Globe Hotel. Mr Brown was only there for a short while and passed away on the 5th October 1926 just fifty-four years of age. Mr Brown died at the home of his father-in-law Mr Preece at Cwm Cottage Road, Abertillery. His obituary stated he had spent all his life at Abertillery, his father died when he was young and he was brought up by his step father Rev Thomas Allen, the father of Sir Thomas W. Allen.

Mr Brown was a brother to Mrs T. Preece, Councillor Mr James Brown living at Weston-super-Mare, Mr Arthur Brown living in America, and Mr John Brown M.E., of Blythe Street, Abertillery. Mr Brown was a founding member of the Liberal Club, Abertillery, a founding member of the P.S.A, an assistant superintendent of the Refuge Assurance Company and a supporter of the sports in Abertillery, he had given a cup for competition to the Western Valley Billiard League.

The Death of Mr Josephus Powell.
In February 1953 Mr Josephus Powell passed away at 69 years of age. His obituary stated he was a member of the R.A.O.B., had been an official at the Vivian Colliery, Abertillery and had been a licensee of the Bell Hotel, Abertillery, the Castle Hotel, Blaina and the Royal Oak, Cwm and had lately been a collector for the Rediffusion Ltd. At the time of his death he was living with his wife Caroline at 23 Marlborough Road, Abertillery.

The Closure of the Bell Hotel.
I cannot find a closing date although the Bell Hotel wasn’t featured on sports leagues score cards after 1961 and an electrical company advertised they were to open a store at the Bell Hotel in 1965.

John James Electricals.
In May 1965 there were advertisements printed in the South Wales Gazette stating that John James, exciting bargains in TV, radio and electric appliances etc are to celebrate the opening of a new branch at Abertillery in The Bell, Somerset Street, Abertillery. Telephone number – 2245.