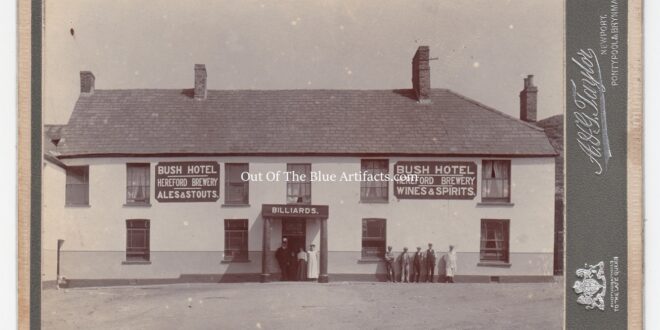 The Bush Hotel – Nantyglo.
The first known report of the Bush Inn, Nantyglo was printed in the Glamorgan, Monmouth and Brecon Gazette and Merthyr Guardian 25th May 1833. Mr Robins of the Bush Inn Nantyglo was taking bookings for emigration to the United States by sailing ship.

Travelling Dentist.
In June 1850 it was reported in the Monmouthshire Merlin newspaper that Mr L. Mosely a surgeon dentist of 30 Berners Street, Oxford Street, London was visiting various hotels and public houses for consultation and the Bush Hotel, Nantyglo was one of those places he was in attendance at this time.

Name Change.
During the 1850’s the premises was named the Bush Hotel as opposed to an Inn.

A New Market.
In 1854 a new market place was constructed. (More information to come).

During the 1870’s Mrs Julia Murphy was listed as being a barmaid at the Bush Hotel, Nantyglo. 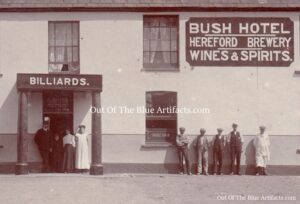 Mr R. L. Masters had previously been a Sergeant-Instructor to the 1st Field Ambulance (R.A.M.C.) at Ebbw Vale. 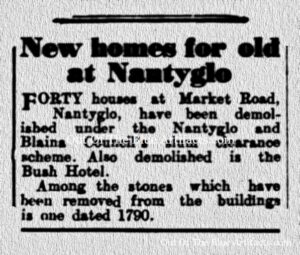 The Demolition.
On Friday 16th February 1962 the South Wales Gazette reported the demolition of the Bush Hotel, Nantyglo in the Nantyglo and Blaina Council’s slum clearance scheme. It was stated that over forty houses on Market Road were cleared and knocked down and that during the demolition of the buildings a stone with the date 1790 was found.