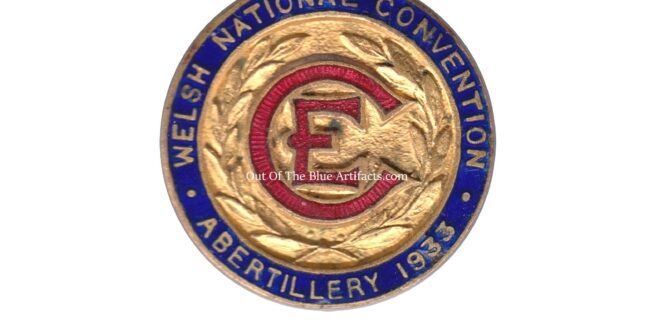 Made by the Birmingham Medal Co. Size 1″ inch in diameter. 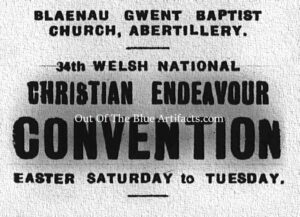 The National Christian Endeavour Union of Wales Annual Convention.
On Friday 21st April 1933 the South Wales Gazette reported on the annual convention held at Blaenau Gwent Baptist Church, Blaenau Gwent, Abertillery. It was stated it had been one of the best conventions ever held in Wales, there had been a large number of delegates drawn from all parts of Wales and discussions at the conferences were marked by a high tone and much enthusiasm while the public meetings were remarkably successful with the spacious edifice at Blaenau Gwent being on several occasions filled to overflowing. Following is a day-to-day report of the convention.

Saturday 15th April 1933 – The National Council was first welcomed on Saturday at a luncheon, over which the Rev Rowland Jones B.A., of Penarth, president of the Welsh Union presided. The chairman thanked the Girl Guides and Boy Scouts for directing the guests to Blaenau Gwent. Rev D. Smith of Ogmore gave thanks. Later in the afternoon Mrs J. I. James of Narberth (late Abertillery) on behalf of the Western Valley Union welcomed the delegates and was supported by the following – Mr J. Hillier J.P., Chairman of the Abertillery Council; Mr M. Sheen (Councillor); Rev E. T. Samuel (Vice-President of the Free Church Council); Mr Bann (Chairman of the Sunday School Union); Mr F. Sheen (Blaenau Gwent Church); Rev Rowland Jones and Rev E. R. Squire:

On Saturday evening the Junior Endeavourers of the district gave a demonstration at the Metropole Theatre, Abertillery. The main event was a show performed which mainly referred to the founder of the movement Dr F. E. Clark and the foundation of the movement. The production team were as follows – Mrs Lawrence of Blaina (Producer); Mr Bryant (Stage Manager); Mr D. Jones (Assistant Stage Manager); Miss E. Thomas of Llanhilleth (Choir Conductor); Miss Kathleen Thomas, L.L.C.M., (Pianist) and Mr I. Carter, F.T.S.C., (Orchestra Conductor):

Sunday 16th April 1933 – Special references to the convention were made at local churches on Sunday. At 8.00pm a praise service was held at Blaenau Gwent Baptist Church, it was reported that Rev Ivor Evans (Pastor) presided over a huge congregation. A feature of the service was the singing of the united choir conducted by Mr T. Bundred who gave magnificent renderings of “Worthy is the Lamb”, “Magnify and Glorify” and “Hallelujah Chorus”. Mrs W. Brown (Organist).

Miss Edith Jones President of the National Christian Endeavour Union of Wales.
Miss Edith Jones was installed as president, the ceremony was conducted by Rev Rowland Jones. Miss Jones who was the first lady to be appointed president of the Welsh Union had been associated with the Christian Endeavour since she was a child at at the Calvary Church, Treforest. In the evening Miss Jones presided over a meeting held at the Blaenau Gwent Baptist Church, it was reported that the church was filled and the congregation included parties that had travelled from Ogmore Vale, the Rhondda Valley, Ynysybwl and other parts of South Wales and the meeting was seen as one of the most inspiring held at Abertillery in some time.

During the election of Miss Jones as president there seemed to be unrest amongst members the association with the election process, the Rev Cecil Richardson who had been nominated for the vice-presidency said that under the circumstances he would withdraw, Rev J. H. Harrison of Newport said he strongly objected to this method, they should respect more than they did the democratic principles, Rev David Smith of Ogmore denied they ignored the democratic principles, Rev Richardson declined to allow his name to go forward and after some discussion Mr G. F. Austin was elected as vice-president. Throughout Monday many other subjects were discussed, too many to transcribe but available on request.

Wedding Ceremony at the Convention.
On Monday 17th April 1933 during a break at the convention of the Christian Endeavour Union at the Blaenau Gwent Baptist Church a wedding ceremony took place. Miss Helena P. Gardner, the sixth daughter of Mr Gregory Gardner of 2 Clydach Cottages, Cwmtillery was married by Rev Ivor Evans to Mr Cyril Beethoven York of Norman Street, Blaenau Gwent, Abertillery. The South Wales Gazette reported the bride wore a sea-green costume with a hat to match and was given away by her brother-in-law Mr J. E. Edmunds. Mr Frederick York was best man. The three bridesmaids, also dressed in sea-green dresses with hats to match were – Mrs Muriel Prosser, sister of the bride, Mrs Margaret York, sister of the bride and wife of the best man and Miss Myrtle Bryant a friend of the bride. The wedding reception was held at the home of the brides sister Mrs Phyllis Evans, 30 Gaen Street, Blaenau Gwent, Abertillery. Mr J. T. Boots conveyed to the happy couple the good wishes of the delegates present.

Handbook Design.
The Convention Handbook cover was the result of a designing competition which was open to all juniors and intermediate members in the Western Valleys. The winner was Bob Wallace of Abertillery, he was presented with a gold C.E. badge at the close of the rally.