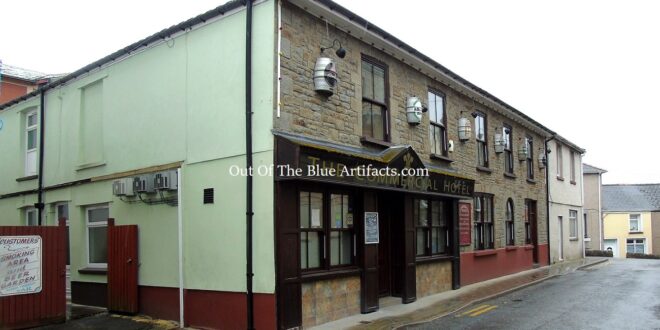 The Abertillery Police Station at Market Street, Abertillery.
In the 1860’s the Abertillery Police Station was at Market Street, the police officer in charge was constable Patrick Flemming, he had been in Abertillery since 1869 and was resident at the station with his wife Mrs Mary Ann Flemming. The police station was listed as being adjacent to the Commercial Hotel and close to the Top Bell Inn, so it seems to have been situated where the Market Hall was later built, next door to the Commercial Inn.

Mr Edwin Hoskins.
In 1871 Mr Edwin Dando Hoskins was named landlord at the Commercial Hotel, Abertillery. Mr Edwin D. Hoskins was married to Mrs Ann Hoskins nee Williams of Tredegar in 1869. Mr Hoskins had previously been living with his uncle at the Greyhound Inn, Nantyglo before coming to Abertillery.

Mr Joseph Balmond.
On 15th November 1873 Mr Joseph Balmond was the landlord at the Commercial Inn, Abertillery. In the report Mr Balmond was charged with allowing gambling on his premises. The game in question was skittles and the players used brass checks in lieu of cash. It was acknowledged that by using checks it was a way of getting around the gambling rules and regulations and it was not seen as gambling with money. These checks were then exchanged for cash over the bar. At this time the police started to clamp down on this practise and kept a look out at all licensed premises. 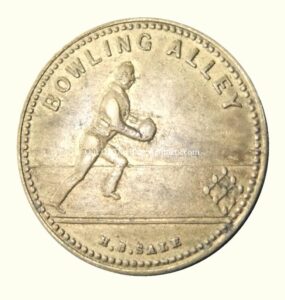 Brass Pub Checks.
Most public houses had these brass checks made for the purpose of gambling without using money, the name of the inn and its licensee was embossed on one side and a skittle player embossed on the other (as seen in the image left). The check featured is from the Rising Sun public house, Cwmtillery and is dated to about the 1860’s -1870’s while Mr Charles Reynolds was landlord there.

Miners Meetings.
In November 1881 a meeting of workmen from the Jaynes Tillery Colliery was held at the Commercial Hotel, Abertillery in connection with the rules and regulations of blasting in coalmines. A new rule had been passed which prohibited blasting by explosives, though after a long discussion a resolution was passed that it was the unanimous opinion that it was unnecessary to discontinue blasting in mines, it would be an inconvenience and would not add to the safety of the collieries. The meeting hoped other districts would vote the same and asked the Home Secretary to reconsider.

The master sinker was Mr Joseph Briggs also from Durham and living at 58 Castle Street, Abertillery, they may have been related but it cannot be confirmed at this time. Both men, Joseph and John, Johnston Briggs were mentioned in reports of May 16th 1891 when the Vivian and Gray sinkers held a testimonial in the Railway Inn for Mr John Burgess the organiser for the fund for the widows and children of the sinkers who had lost their lives in the tragedy of December 1890 during the sinking of the Vivian Pit. By the mid 1890’s Mr Joseph Briggs, the master sinker had returned to Durham and was sinking Easington Colliery, County Durham, later censuses states that his daughters Misses Lavinia and Phyllis Briggs had been born in Abertillery.

Pit Sinkers.
All the sinkers that came to Abertillery when the collieries were opening out were fearless and highly specialised in their field, they were often referred to as a different breed. They lived in lodgings in and around the town and were a very close knit bunch of workmen. In July 1892 the Chief Constable of Monmouthshire voiced his fears over the concern of an increasing population. The Llanhilleth area like most towns in the district had seen a huge growth in population owing to the new collieries being sunk. He said “A large percentage of the men who had arrived were pit sinkers and these were the wildest in society”. He asked for more policemen to augment the local force.

Mr and Mrs James and Maud Doolan.
In 1909 the Abertillery ex-policeman Mr James Doolan was landlord at the Commercial Hotel, Abertillery. Mr Doolan was born in 1881 in Ireland and had recently retired form the constabulary and became a licensee. In 1909 Mr Doolan married Miss Maud Penry of Crickhowell. While at the Commercial Hotel Mr and Mrs Doolan had working for them Mr Ben D. Luther and Miss Annie Knight as servants.

The Billiard Room.
In October 1910, under the tenure of Mr James Doolan a billiard room (as seen right) was opened at the Commercial Hotel, Abertillery.

The Death of Mrs Hanney.
In February 1924 Mrs Hanney the one time landlady at the Commercial Inn sadly passed away at her residence Warm Turn, Aberbeeg.

In 1924 Messrs Webb’s Brewers, Aberbeeg had the Commercial Hotel “To Let”. The company placed adverts in the local papers until Mr and Mrs Berrows became licensee’s in 1930. Messrs Williams and Jenkins must have been temporary tenants.

Mr and Mrs Frederick and Lilian Berrows.
In 1930 Mr Frederick John Henry Berrows and his wife Mrs Rose Lilian Berrows were landlord and landlady at the Commercial Hotel, Abertillery. The couple had also been steward and stewardess of the Constitutional Club at Aberbeeg.

Boxing Tryouts.
On Friday 30th April 1934 the Commercial Hotel, Abertillery was used as a sports venue for a boxing tryout. The South Wales Gazette reported that Mr Bert Plummer was making a strenuous effort to reintroduce boxing in Abertillery. The boxers who appeared were – Johnny McCoy of Argoed (who had been recently defeated by Herbie Hall for the fly-weight championship of Wales); Kid McCoy and Vic McCoy both of Argoed; Les Morgan of Bargoed; Harry Prosser of Cwm; Johnny Gilbert of Abertillery; George Francombe of Abertillery and Ken Wilcox of Abertillery: Many more featured on the night but were not named in the report. Mr Bert Plummer was M.C. with Mr E. Heapy as timekeeper. The assistants were – Messrs Oliver Bevan; E. Williams and Matt Watkins:

The complete list of the landlords and landladies was kindly supplied courtesy of Mr Bryan Boots.

The Later Years.
The Commercial Hotel, Abertillery is to this day still open and trading.