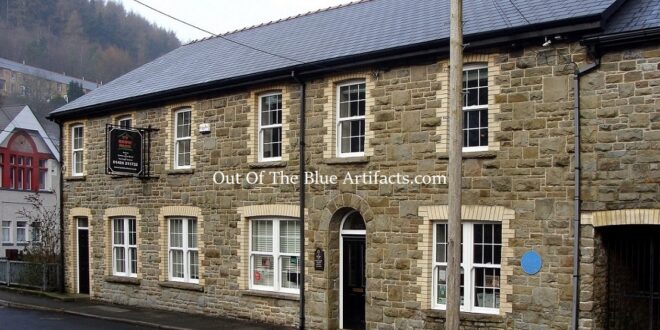 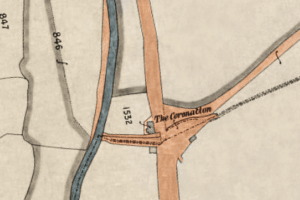 Coronation Tavern.
The Coach & Horses Inn, Six Bells was originally called the Coronation Tavern and was established around 1835, maybe earlier and was situated close to the old tram road later railway line (as seen on the land map of 1840 left) close to where the subway is today.

Mr Lewis.
Mr Lewis was an early landlord of the Coach & Horses Inn, Six Bells though sadly there is no information on Mr Lewis or his family at this time.

Mr David Esau.
Mr David Esau married Miss Cecilia Samuel in 1836, they were mentioned in a few reports as being tenants of houses in the Six Bells area and became landlord and landlady of the Coach & Horses sometime in the 1860’s. Mr and Mrs Esau had a daughter Martha Esau, born in 1840.

The Relocation of the Coach & Horses Inn.
In February 1871, during the widening of the Newport to Nantyglo Railway Line, the Coach & Horses Inn was demolished owing to its close proximity to the railway line (as seen in the report right) from the Monmouthshire Merlin. After its demolition it was planned to have the Coach & Horses rebuilt just a short distance away, adjacent to the River Ebbw. In the meantime Mr Esau’s wife Cecilia applied for a temporary licence to sell alcohol from another house until the rebuilding was completed.

Mr Joseph Price.
In 1860 Miss Martha Esau, the daughter of Mr David and Cecilia Esau of the Coach & Horses, Six Bells, married Mr Joseph Price. Mr Price was a miner from Dudley, Staffordshire. He and his wife Martha later lived at Cwm Street (Somerset Street), Abertillery and the family started buying property in the area.

In 1874 Mr David Esau was leasing land at Six Bells from the Brynmawr Coal and Iron Company, he had leased 1,200 sq yards, part of the Cwm Estate.

In September 1876 Mr Joseph Price applied for a spirit licence at his house the Coach & Horses at Six Bells.

At some point in the late 1880’s Mr Joseph Price had leased the Coach & Horses Inn to Messrs Phillips & Sons, Brewers of Newport. Mr Price later became landlord of the Railway Inn, Abertillery and it was reported he owned many houses at Six Bells.

During the 1880’s the Coach & Horses was the venue for many miners meetings in connection with the Hafod Van Colliery, Six Bells. It was also a local meeting place for the Miners Federation conferences.

On the 1881 census Mr Joseph Price was landlord at the Railway Inn with his wife Martha, living with them was Mr David Esau, Martha’s father, he was registered as living off his own means.

Mr John Esau.
In August 1891 it was reported that Mr John Esau, son of Mr David Esau and brother-in-law to Mr Joseph Price was residing at the Coach & Horses and had applied for a licence to sell alcohol.

On Saturday 8th January 1898 Mr T. Evans of Newbridge, the District Secretary of the South Wales and Monmouthshire Ancient Order of Britons conducted a special service at the Coach & Horses Inn, Six Bells in connection with the transferring of the the existing Lodge of the Loyal Pride of the Valley, of the Order of Oddfellows, to the Royal Britannia Lodge of the Ancient Order of Britons. Mr Evans told reporters that in over 40 years service to the order he had never carried out such a task before. The lodge at this time consisted of 72 adults and 16 juveniles, the capital of the lodge was £315. 3s. 10d. A public meeting followed and it was announced that Mr J. Price was chairman and Mr J. Jones was secretary of the lodge.

In 1906 during a licensing inspection of all licensed properties in the area, the Coach & Horses came under scrutiny, it was reported that the landlord was Mr John Esau, the owners were Phillips & Sons. It seems as though Mr Joseph Price must have sold the Coach & Horses to the brewery company. The report also mentioned that at the rear of the premises there was a blacksmiths shop sub-let with no boundary wall and that there was no urinal at the premises. There was no other report on the construction although a urinal was later placed by the side of the Coach & Horses.

In the early 1920’s Mr Patey moved to the Kings Head Hotel at Pontnewydd and temporarily transferred the licence of the Coach & Horses over to his son Mr Trevor Arthur Patey.
More on the Patey family below.

The Death of Mr Joseph Price.
In August 1910 Mr Joseph Price sadly passed away at 73 years of age. His obituary in the South Wales Gazette stated he had been licensee of the Railway Inn, Abertillery and he had owned the Coach & Horses Inn at Six Bells though had leased it to Messrs Phillips & Sons, Newport. It also mentions that the Railway Inn of which he had been publican was known as the “Old Shop” many years ago with it having a connection with the Abertillery Tin Works.

In October 1910 the will of the late Mr Joseph Price was made public. It stated he had owned property in Somerset Street, Six Bells and James Street with his home Clytha Crescent. He left an estate worth a gross value of £10,189. 0s. 10d. The equivalent to about £1.1 million in today’s money.

In January 1923 Mr Arthur Edwin Patey committed suicide at Pontnewydd and the position of landlord at the Coach & Horses was taken by the partnership of Messrs T. A. & L. C. Patey.

The Coach & Horses also entered the Dart and Skittles Leagues though I have no players names at the moment.

The Coach & Horses was a Messrs Phillips & Sons, Newport, house, selling their beers, it later became part of the Simmonds and Courage Brewery.

The Coach & Horses Inn closed as a pub in the early 2000’s and was recently converted into the Ty Ebbw Vach Communities First building and Cafe.

Points of Interest – The Patey Family. Arthur E. Patey. Mr Arthur Edwin Patey was the son of Mr and Mrs William and Eliza Patey of Somerset. William was a railway inspector. Arthur Edwin Patey was born in Cardiff in 1878. In 1897 he married Miss Laura Constance May Weare of Usk, born 1878. They had a son Trevor Patey born in 1899.

The family moved to Abertillery and Mr Patey, a stone mason by trade became landlord of the Prince Of Wales Inn Abertillery and in 1906 became landlord of the Coach & Horses, Six Bells. In the early 1920’s Mr Arthur Edwin Patey, besides being the landlord at Six Bells he also managed the Kings Head Hotel at Pontnewydd, though in 1923 Mr Patey was found dead at the Hotel at Pontnewydd, newspaper reports at the time said he had committed suicide.