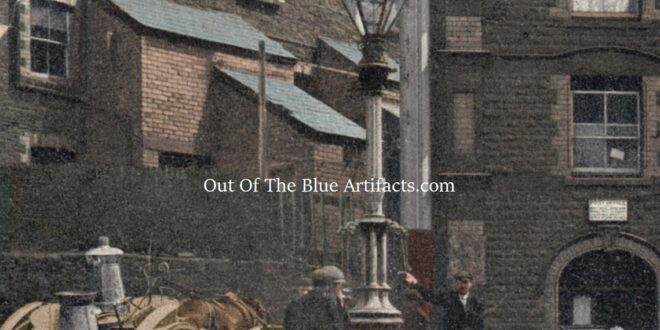 The Drinking Fountain – Bush Hill, Abertillery.
On Tuesday 25th of March 1902, a special meeting of the Abertillery District Council, convened by Mr W. P. Thomas the chairman, was held for the purpose of considering in what manner the Coronation of King Edward VII should be celebrated in the district.

It was decided to celebrate the coronation day by holding athletic sports at the Abertillery Park in the afternoon, the proceeds of which would go to providing drinking fountains and troughs for man and beast to be erected in commemoration of the coronation and to give a tea to the children of the poor. At this meeting the following members were appointed managers for the three Wards – Mr C. W. Carpenter (South Ward); Mr J. Tarrant (Central Ward) and Mr G. Little (North Ward): At this point an Abertillery Council Coronation Committee was set up, this committee was one of many in South Wales, nearly every major town had such committees in the run up to the Coronation.

On Thursday 27th of March 1902, at a meeting of the Abertillery District Council, Mr William Thomas presided in the absence of the chairman Mr Thomas. The following gentlemen were present – Mr Daniel Lewis; Mr E. J. Williams; Mr J. Tarrant; Mr W. Jones; Mr G. Little; Mr D. Smith; Mr G. Purnell; Mr W. Gait (Deputy Clerk) and Mr J. McBean (Surveyor): decided to leave the provision of teas for the children of the various wards to the ward secretaries. A contribution of 10 guineas was received from Mr E. J. Williams J.P. towards the cost of the drinking fountains and arrangements were made for holding a tradesman’s carnival.

On Friday 9th of May 1902, a meeting of the Abertillery District Council’s Coronation Committee took place in the council chambers. Arrangements for providing tea for the children was discussed, it was to be provided by the teachers and members of the Sunday schools where the children regularly attend. It was resolved to erect a drinking fountain opposite the Bush Hotel and have it unveiled on one of the holidays. It had been planned to present the children with a medal though this was altered and was decided to give them a book giving a history of the coronation instead.

In May 1902 it was reported that someone had suggested to the coronation committee that it would be more beneficial to the area to have a town clock erected in Abertillery to celebrate the coronation.

In June 1902 the timetable for the coronation celebrations was announced as follows – Thursday a carnival procession was to take place on the morning. Upon return the participants and crowd to assemble at Bush Square for the unveiling of the drinking fountain. The council approved the purchase of new uniforms for the Abertillery Fire Brigade so they may look respectable at the procession. In the afternoon a special sports day would take place at the recreation ground. It was also stated that from Thursday to Saturday will be taken as a holiday and the town shops and other businesses were getting ready for the big celebrations.

Books on the “Crowning of the King” were presented to each child at the National School and the children of the Board Schools upon leaving for the holidays.

The Pontlottyn Store as with many other shops in Abertillery stocked every requisite for the occasion and advertised “Decorations for the Coronation” (as seen left). The store sold flags, streamers, medallions, trophies, lanterns and Japanese tent umbrellas, as they say on the advert – The choicest array of novelties ever exhibited.

The Coronation of Edward VII scheduled for 26th of June 1902 was postponed at the last-minute owing to the King having been taken ill, though the various towns celebrations went ahead. The official coronation was re-scheduled and took place later on the 9th of August 1902.

The Coronation Celebrations.
On Thursday 26th of June 1902, the celebrations began. In the morning the carnival procession formed and paraded through the main streets of Abertillery and to assemble back at the Bush Hill for the unveiling of the drinking fountain. 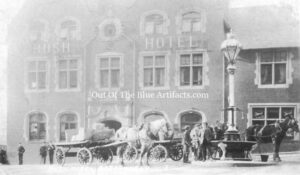 The Unveiling of the Drinking Fountain.
At mid-day a great crowd gathered on the square near the Bush Hotel, the occasion being the unveiling of the newly erected Abertillery Drinking Fountain that had been erected by the Abertillery District Council. It was reported that it was the first ornament that had been built by the council to grace the streets of the town. The ceremony was performed by Mr E. J. Williams. After many speeches by various council members, the volunteers under the command of Sergt-Instructor Fryers did honour to the occasion by firing three volleys over the flag that flew from the newly erected drinking fountain.

The children of the poor were given tea, they afterwards entertained themselves at the park.

In the afternoon a Coronation Sports Day took place at the Abertillery Recreational Grounds. Numerous races were held, including a 120 yard flat handicap, a 120 yard three-legged race, a 120 yard boys race, a 440 yard flat race, a blindfold race, a sack race, an old man’s race a three-mile cycle race and a 1-mile cycle race. Too many participants to write down though names can be given on request.

The New Light and Shade for the Fountain.
In July 1902 an incandescent light was placed on the top of the Abertillery Drinking Fountain. It was reported that the fountain had seen hundreds of thirsty visitors and a leading councillor said that the fountain trough had been subjected to much abuse, he stated that this behaviour would not be tolerated and the culprits would be dealt with severely. 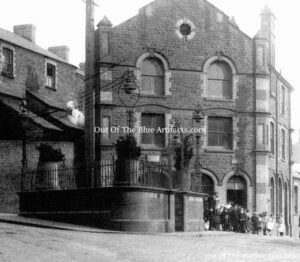 The Underground Urinal.
In the early 20th century there was a great demand for public gents urinals to be constructed in the town. Many were built and later the women of Abertillery demanded they have the same utility and proposed to the council that ladies lavatories be provided.

In February 1924 Mrs A. H. Dolman of the Woman’s Citizens Association of Abertillery proposed to relocate the drinking fountain and to ask the council to erect a ladies lavatory in the town. At some point later the drinking fountain was removed and an underground urinal was constructed on Bush Square (as seen above) I’m not sure if this urinal was originally used by both ladies and gentlemen or just a gents toilet facilities? The underground urinal was in use until it was removed and covered over in the 1950’s. (More information to come).

Point of Interest – The main image of the Abertillery Drinking Fountain was taken after its unveiling, it shows the Abertillery Post Office that was built in 1903 in the background.

In the first part of the 1900’s there was a major scheme to construct many gents urinals in and around Abertillery. There was even talk of having a ladies convenience built in town (more on this subject to be uploaded).