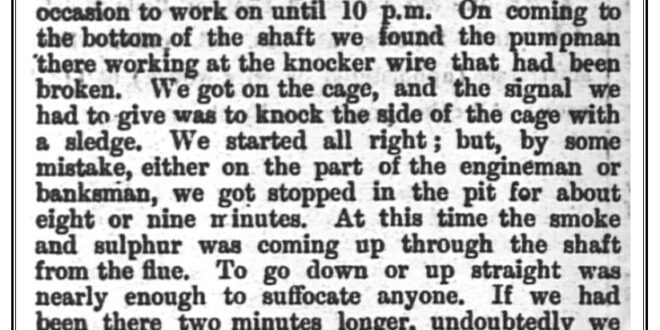 The Ventilation in the Mines During the 19th Century.
In the early deep coal mines (pre-electric fan ventilation) ventilation was generated by furnaces in a ventilation shaft, all the documents I have found relating to this shows the coal furnaces were at pit bottom in the up-cast shaft, located in two large recesses at the back of the shaft.

Air Circulation.
The hot air raising to the top of the pit would pull air through the roadways underground from a downcast shaft located elsewhere in the colliery. The tunnels underground were all be connected though to stop any short-cuts in the flow of air these tunnels would be blocked by air-doors. These air-doors would allow the flow of fresh air to circulate right throughout the underground workings.

The Furnaces.
Generally two furnaces were situated in the recesses with one burning and the other on stand-by to be lit when the other needed maintenance or cleaning so as to keep a constant air flow throughout the mine. It was originally believed that these ventilation shafts were not used for winding purposes as of the heat generated. Though the report in the image above and the further research found below disproves that theory.

The featured report in the image above is from an account of such dangers associated with the upcast shaft furnaces from 1889 relating to what had happened in 1884.

Later furnaces were positioned at the surface but they did not generate enough air current as powerful as the underground ones.

Split Shafts.
Early deep mines also operated with one shaft, the owners would often refuse to pay for another shaft for ventilation flow and very often partitioned off the full length of the shaft with brattice cloth to enable the one shaft to be used as an upcast and down cast. After many deaths and gas problems this practice was stopped by inspectors and they enforced the mine owners to have at least two shafts at any one colliery or to be linked to other mines for ventilation purposes.

Air Buffering and Vented Cages.
In some large pits these furnaces were in un-used shafts built for this purpose, with a large round stone chimney around the mouth of it on the surface about 20′ foot high, mainly for safety reasons and for a good air flow to stop any buffering of the wind from any nearby buildings. Other smaller pits used the man riding and supply shaft, often the bond or cage would have ventilating holes cut in them to aid the flow of smoke and air raising up the shaft and engine winder drivers were also given orders not to wind too quickly as not to disrupt the air flow.

Shaft Chain Guides.
These shafts also used chain guides for the cage rather than the wooden guides as a fire precaution. It was also convenient for the removal of the ashes from the furnaces by sending them up the shaft. In a report from the early 1870’s a winding engine man was sacked after the men went on strike and refused to descend the Penybont Tillery Colliery when they found out he had been winding ashes against them in the shaft on the morning shifts, a practice that had been stopped years previously over safety concerns.

A report of an accident at Penybont in January 1872 stated a young boy by the name of Lewis Henry Williams met with his death by falling out of a cage that was descending the Penybont Tillery Colliery shaft, he was going down with seven men when the cage caught on a bolt that was holding the chain guides together and he slipped out of the cage and fell to his death:

The following inquest heard that the colliery had only just started using this downcast shaft as a man rider as the upcast shaft was getting too unbearable with the intense heat from the ventilation furnace. The men had for years been trying to get the use of this shaft but had been refused by the past owners, it was only when Mr Jayne had taken control that he had given permission and they then equipped it with the similar chain guides used in the upcast shaft.

The inquest also recommended the use of wooden guides to be used in the downcast shaft instead of the old chain ones.

The Extent and Size of the Ventilation System.
In a report from the Cwmtillery Colliery explosion in the 1870’s written by a mines inspector it states the South Wales Coal Co Collieries has four shafts, three in the Cwmtillery side and one at Rose Heyworth.  As the South Wales Coal Co Collieries – Cwmtillery & Ros Heyworth were connected underground and with such a large network, the intense heat generated by the furnaces in Cwmtillery to enable a good strong air flow through many miles of roadway it must have made it impossible to use as a winding shaft and therefore only used as a ventilation shaft, the furnaces were 9′ feet and 8′ feet wide and burned 5 tons of coal per 24 hour period.

So in the early days of coal mining it was close to being in Hell!