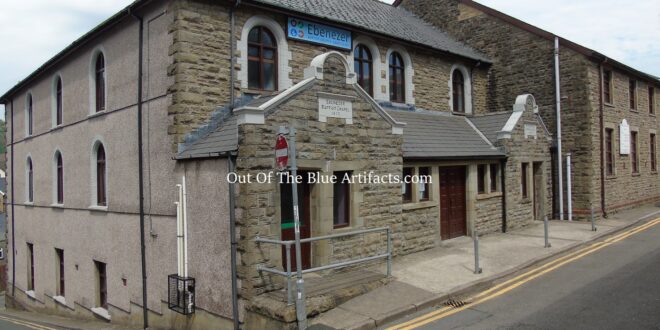 The Ebenezer Baptist Church – Abertillery.
The organisation originated in a split at the King Street Baptist Church when on Sunday 3rd December 1876 the Rev Llewellyn Jones left his ministerial post at King Street and took eighty-two members with him, with the intention of founding a new cause. 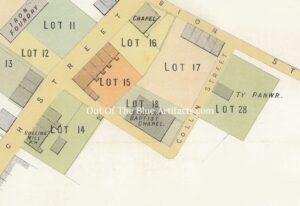 The Ebenezer Church Site.
Their new church was to be situated on Collin Street, Abertillery (as seen on the 1879 map left) later renamed Park Place, Abertillery.

Collin Street.
Collin Street was the original name of the roadway that the Ebenezer Church was constructed upon, though later during the local board street renaming programme it was changed to Park Place.

The Construction.
In 1876-77 a site was secured and building operations began. The Ebenezer Church was originally formed and constructed over a period of two years.

The Contractor and Architect.
The Ebenezer Church was built by Messrs Daniel & Williams of Nantyglo and the architect was Mr E. Walker an outfitter of Abertillery.

The Ceremony of the Laying of the Memorial Stone.
On Saturday 28th July 1877 the Star of Gwent newspaper reported the memorial stone for the new Baptist Chapel was laid by Mr Alexander James on behalf of his wife who was unable to be present on account of the bad weather. Rev Llewellyn Jones the pastor read a portion of scripture and Rev Morgan of Maesycwmmer offered prayer. After the stone was laid Mr James gave the chapel a cheque for 10 guineas. In the evening a public meeting was held under the presidency of Mr Walker, addresses were given by the chairman, Messrs Morgan, Thomas, Parry and Jones. The choir performed under the leadership of Mr James Esau. 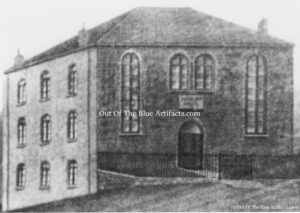 The School Rooms.
On Sunday 16th December 1877 the new school rooms underneath the Ebenezer Church were used for the first time.

On Tuesday 26th October 1880 the Ebenezer Church was admitted into the Monmouthshire Baptist Association at Caersalem, Aberbargoed.

The New Lecture Hall and Classrooms.
In 1904 the Ebenezer School Rooms were becoming to small for purpose, there were 600 juvenile scholars and about 400 senior adults on the books and the teachers and pupils were hampered by lack of space. The adults used the church for school education and the children used the schoolrooms. In the spring of 1904 it was proposed to have a new large school build with classrooms adjoining the Ebenezer Church. Land was acquired from Mr William Jones and tenders were invited by the council with plans and specification held by the Building Committee’s Secretary – Mr F. G. Wall of the Penybont Stores, Cwmtillery. The chairman was Mr Thomas F. Salt and the treasurer was Mr S. C. Holman. The tender of Mr Moses Adams, the contractor was accepted.

The Contractor and Architect.
The contractor was Mr Moses Adams. The architect being Mr W. Beddoe-Rees, A.R., I.B.A., of 37 St Mary Street, Cardiff. The work was estimated to have cost £2,000 with Mr E. J. Skidmore as clerk of the works. Mr R. J. Ayers of Abertillery did all the glazing and painting. The sanitary and lighting was carried out by Mr G. W. Wheeler and all the partitioning was installed by the North of England School Furnishing Company Ltd.

The building project began in the spring of 1905.

Description of the Building.
The new Ebenezer Lecture Hall and Classrooms consisted of – On the basement floor were two large classrooms which had access to the old schoolrooms, they had rising galleries capable of accommodating 150 children each, the other two rooms were smaller but suitable of holding between 30-40 children. A kitchen with a furnace and lavatory conveniences were also provided in the basement. On the first floor was a large lecture hall, with galleries on three sides capable of holding 800 people. By means of folding partitioning this space could have been divided up into 17 smaller compartments, each shut off from the main hall. These rooms were capable of holding classes of 20 children in each. With the addition of another folding partition the church could be accessed enabling an extra 150 people to be seated. The building was constructed of local stone with Forest of Dean stone dressings. All woodwork was of pitch-pine. The rooms were heated throughout on the high pressure system installed by Messrs Hampton & Co. In addition to the lecture hall and classrooms a new large entrance lobby was added to the church with new stairs to the galleries.

The Church Restoration.
By July 1906 the Ebenezer Church was in need of much needed restoration and tenders were invited by the council for alterations, painting and renovations. The plans and specifications being held by the caretaker at Chapel House.

Contractor and Architect.
The contractor was Messrs Skidmore & McWhirter. The work was estimated to have cost £300.

The church restoration work consisted of the substitution of the old lath and plaster for match-boarding, the provision of elevators, to make the church better lighted. There was also an increase of 12,000 cubic feet air capacity in the edifice resulting in the acoustics of the building greatly improved with the speakers being heard with ease from all parts of the building. The gas lighting was completely overhauled and improved with the plumbing work being done by Mr G. Wheeler, Abertillery.

The Re-Opening of the Ebenezer Church, Abertillery.
On Sunday 4th November 1906 the Ebenezer Church was officially re-opened after the extensive alterations and renovations. The reopening service was officiated by Rev D. Collier. The choir was under the leadership of Mr George Jones, Master James Partridge of Cwmtillery sang a solo and Mr James Taylor presided at the organ. The sum of £31. 9s. 10d. was collected throughout the day.

The Schoolroom Restorations.
In May 1909 the Ebenezer Church Committee decided on alterations and renovations to the schoolrooms. Tenders were invited by the council with plans and specification held by the Building Committee’s chairman, Mr Thomas F. Salt and Mr F. G. Wall the secretary, of the Penybont Stores, Cwmtillery. The tender of Mr Moses Adams, contractor was accepted who done the work under the supervision of Mr A. P. Williams, contractor, the work was estimated to have cost £350. The work on the renovation lasted a few months and alterations consisted of lowering the floor of the schoolroom to gain two feet six inches, giving headroom of eleven feet. Concrete foundations were put in and wooden block flooring provided. The old wooden partitioning was taken out and replaced by brick walls. An up-to-date gas lighting system was installed with incandescent lighting. The premises was also repainted throughout.

Mr George Jones, Choir Master.
On Wednesday 24th September 1913, Mr George Jones was honoured for thirty three years service as choir master at the Ebenezer Church. Miss Down on behalf of the choir and members of the church presented Mr Jones with a gold watch and chain in recognition of his services as conductor of their choir. The watch was inscribed “Presented to Mr G. Jones on his retirement after 33 years as choir master of the Ebenezer Baptist Church, Abertillery Mon Sept 24th 1913” With the watch there was also a double Albert chain and a Mason’s pendant.

In 1921 Rev D. Collier left the Ebenezer after nineteen years service to the church.

Memorial Services.
On Saturday 11th November 1922, special services were held in connection with the opening of the new War Memorial Organ and the unveiling of the War Memorial Tablet.

The Memorial Organ.
The new organ was divided in two portions, each half occupying one corner of the building above the pulpit. The swell organ to the left of the console and the great organ and pedal organ to the right. The console, of oak wood was detached and occupied a place at the back of the pulpit between the two organs. The organ case was of panelled pitch pine with metal show pipes arranged in flats and towers. There were three sets of bellows beneath the gallery blown by hydraulic power. It was stated that Mr Robert Hall, building contractor of Abertillery had a great input with the organ specifications. He was the conductor of the Tabernacle Choir and had been a good friend to the Ebenezer Church. He had inspected organs in various places in different parts of the country and had come up with the idea of a divided organ with the keyboard at the back of the pulpit Mr Amos Harding also had a great input and was said to have designed the organ. The organ was supplied and installed by Messrs W. G. Vowles of Bristol. The tuner and finisher was Mr T. Sankey.

The Memorial Tablets.
The Memorial Tablets were erected by Mr William Evans, the local sculptor. They were attached to the wall between the swell organ and the great and pedal organs. the three tablets made of marble bared the names of the young men connected with the Ebenezer Church who lost their lives in the Great War. In gilt lettering the words “In sacred memory of those who fell in the Great War 1914-1918” and underneath “The memorial organ erected Nov 11th 1922”.

Councillor Mr T. H. Prichard presided on the Saturday evening’s ceremony when Rev D. Collier the late pastor of the church offered a dedicatory prayer during the unveiling of the War Memorial Tablets. They were unveiled by – Mesdames R. Winstone; T. H. Prichard and T. Embrey: Also Mr Jenkin Jenkins:

Mr W. G. Vowles on behalf of the Bristol firm who built the organ presented the key of the organ to Mr John Down the senior deacon. On the following Monday Mr Amos Harding gave an organ recital on the new organ with solo’s by Mrs Gertrude Salt of Swansea, late of Abertillery and Mr John Aiken a solo tenor of Hereford Cathedral.

The Later Years.
The Ebenezer Church building at Abertillery is still active at present.